Democratic Candidates Have an Ebola Problem 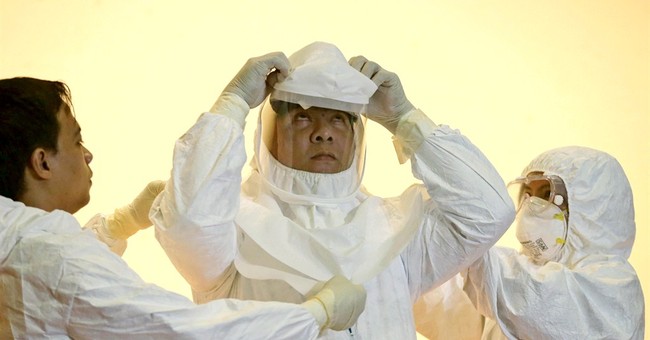 The Sexy Ebola Nurse costume with thigh-high stockings revealing ample flesh above the knee -- yellow boots optional -- is here just in time for the November midterm elections, and for just $60.

And it may be worn as a Halloween costume too.

This Sexy Ebola Nurse costume might just be the hottest political get-up since Nixon masks were used by bank robbers.

But what can't be known about the Sexy Ebola Nurse costume is whether it is:

A) Just another tasteless piece of garbage hawked to desperate trendsetters (or morons) to prove to editors that irony did not die in the 1990s as was once believed; or

B) A harbinger of bad things to come for the Democrats in early November.

I'm going with B.

Ebola, or rather the Obama White House handling of Ebola, is causing midterm problems for Democrats. A series of inconsistent and often clumsy messaging from Team Obama through the Centers for Disease Control and Prevention hasn't exactly calmed the American people. Instead it has done quite the opposite.

And so, some Democrats are stampeding.

The latest example of inconsistent messaging:

"There has been a lot of inconsistency and moving targets, and they (administration) could have done a better job explaining why the military is being treated differently from the other situations," Besser said.

"The other thing is that we're seeing a lot of states that have moved forward with their own quarantines. It's all a moving target, and we're seeing many different things taking place around the country."

With Democrats bolting, perhaps after privately pulling out their hair and screeching at the White House, Obama had no choice but to come out and publicly address the issue.

"The military is in a different situation," the president said. "They are, first of all, not treating patients. Second of all, they are not there voluntarily. It's part of their mission that's been assigned to them by their commanders and ultimately me, their commander in chief. We don't expect to have similar rules for our military as we do civilians."

Imagine candidate Obama saying something like that? No? I can't either. But he's not on the ballot, is he? As he said rather famously in Chicago recently, only his policies are on the ballot.

Mix in the 24-7 cable news coverage on Ebola, and decades of movies about deadly epidemics and zombies, stories about TV doctors who ignore quarantines like Dr. Nancy "Soups" Snyderman of NBC News, and it should be obvious why Democrats are worried.

They're listening to the voters who don't like how Obama is handling this. And unlike Obama, the politicians are on the ballot. They see Obama's Ebola policy as threatening their elections, so they're getting out in front.

Some have called for mandatory quarantines or monitoring of any health workers who've been exposed to the deadly virus, Democratic Illinois Gov. Pat Quinn among them. This group includes Gov. Andrew Cuomo of New York, another Democrat, and Republican Gov. Chris Christie of New Jersey.

Obama won't implement a travel ban, arguing that it would do more harm than good in fighting the disease.

But Sen. Jeanne Shaheen, the New Hampshire Democrat, said she'd support travel bans. This is a flip-flop from only a week before, when she agreed with Obama saying that travel bans would be counterproductive. And Sen. Kay Hagan, the Democrat of North Carolina, called for a travel ban, and Sens. Mark Udall, D-Colo., and Mark Pryor, D-Ark., have also called for similar restrictions.

So why not just take the politics out of it?

Isolate the disease, institute a travel ban to keep it away from us, and let's use our expertise to treat it at its source.

What's so radical or terrible about that?

There is nothing to prevent us from sending volunteer health workers to West Africa. We can send them on military planes, and use those same planes for returning soldiers who will be quarantined. But we should adopt the same policy for returning health workers, rather than allowing them to go home and even go out for soup as they can under the Obama policy.

I figure that Halloween isn't a holiday or candy festival in many African nations. And I wouldn't think anyone there, with so many sick and dying, would be so insensitive as to wear Sexy Ebola Nurse get-up.

But historically, in the West, costumes are all about fantasy and commentary, and are often expressions of contemporary lusts or fears.

Yet among politicians -- particularly Democrats facing November midterms with an unpopular president at their backs -- one such lust, or perhaps fear, involves getting re-elected.