What Exactly Does Disrespecting The Flag At An NFL Game Have To Do With Fighting 'Injustice?'

John Hawkins
|
Posted: May 26, 2018 12:01 AM
Share   Tweet
The opinions expressed by columnists are their own and do not necessarily represent the views of Townhall.com. 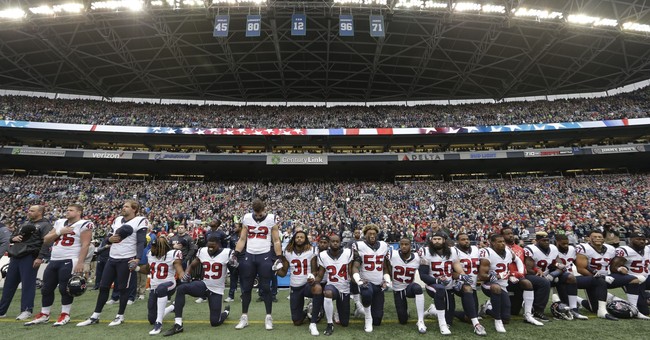 “LET'S GET REAL: If you think kneeling respectfully to protest injustice is more egregious than cops gunning down 12-year-old #TamirRice for holding a toy or murdering #PhilandoCastile in his car with his young daughter, then you have no moral compass. NONE.” – Peter Daou

I love that quote because it’s like saying, “LET'S GET REAL: If you think urinating respectfully on Ted Kennedy’s grave to protest injustice is more egregious than an illegal immigrant murdering Kate Steinle, then you have no moral compass. NONE.”

A reasonable person might ask, “What does urinating on Ted Kennedy’s grave or kneeling when it’s time to respect the flag have to do with what’s being protested?”

There is an answer to that question.

You see, there were a lot of ways Colin Kaepernick could have protested. He chose protesting the flag because he knew that doing something so incendiary would be extremely polarizing and would get a lot of attention, good and bad. Other NFL players saw what he was doing and copied him, not because they really care about the issue, but because they wanted attention for themselves.

However, it turned out that the protests were so polarizing that there were consequences. The protesting players cost the league enormous amounts of money and teams decided they didn't want to hire Colin Kaepernick because bringing him onboard would lead to more protests, which would cost them more money.

That’s when the argument became, "These players aren’t disrespecting the flag. Where do people get that from?" Well, of course the players are disrespecting the flag. That was the whole point of picking that form of protest. The disrespect of the flag was designed to get attention and it did. “Oh, but it’s a peaceful protest! That means it’s good!” The Westboro Baptist Church peacefully protest outside of funerals and that’s not good, right? There is a time and a place for everything and outside of a funeral or while your nation’s flag is being honored is the wrong time to protest.

Of course, the real surprise is that the NFL let its business be hijacked like this. After all, the NFL typically does not hesitate to crack down on players that get out of line in any way on the field. I can still remember Jim McMahon getting a $5,000 fine for wearing an Adidas headband. NFL players have also been fined for wearing special cleats to bring attention to breast cancer awareness and domestic violence. NFL players have been fined for touchdown celebrations, not talking to the media, wearing the wrong color socks and using a cell phone during a game.  Yet, when it came to disrespecting the flag, the NFL was just fine with it until viewers started tuning out.

That was dumb. Very dumb. Why? Well, imagine you’re a restaurant owner who doesn’t care one whit about your employees’ political views. Then, one of your waiters starts wearing a button that says, “Barack Obama can kiss my butt” or alternately, a button that says, “Donald Trump can kiss my butt.” Assuming you don’t just fire him outright, do you tell him to knock that off? Of course, you do because if your business serves the general public, you don’t allow your employees to offend large portions of the general public while they’re on the job. If they want to argue on Twitter all day or work on political campaigns in their off time, that’s fine, but they shouldn’t be using your place of business to push out controversial and potentially offensive political messages.

It took the NFL losing enormous numbers of fans for it to realize that basic principle and now, it’s been decided that the NFL is going to levy out fines if players disrespect the national anthem. According to the NFL,

It was unfortunate that on-field protests created a false perception among many that thousands of NFL players were unpatriotic. This is not and was never the case.

This season, all league and team personnel shall stand and show respect for the flag and the Anthem. Personnel who choose not to stand for the Anthem may stay in the locker room until after the Anthem has been performed.

We believe today’s decision will keep our focus on the game and the extraordinary athletes who play it—and on our fans who enjoy it.

Would this be happening if there wasn’t a boycott of the NFL that cost it enormous amounts of money? Absolutely not and smart conservatives shouldn’t forget that lesson. Of course, the NFL still hasn’t acted decisively. The owners should have made it absolutely clear that NFL games are no place for any kind of political statement and players that refuse to respect that decision can go somewhere else. That’s an entirely reasonable position, but the NFL didn’t have the guts to do that. Moreover, it let the inmates run the asylum for way too long. So now, it’s going to catch a lot of flak from the unpatriotic Left that wants to use the NFL’s product as another way to push its agenda.

Furthermore, the controversy is far from over. Players may choose to stay in the locker room en masse. Some teams, like the Jets, are already saying they will just eat the fines for unpatriotic players. Of course, liberals will be dying to praise any player who is willing to take a fine to disrespect America and the union is already upset that a NFL player’s right to be unpatriotic on the NFL’s dime might be abridged in any way.  The NFL deserves this and the protesting players deserve the backlash they’ve gotten as well.

If NFL players had wanted to be a bridge between the community and the police, they could have done a lot of good, especially since there is at least some rare bipartisan agreement on issues like more police training and body cameras for officers. Instead they disrespected the country that gave them so many opportunities, created division and hatred and hurt the cause they claimed to help. If you start a conversation by being deliberately unpatriotic to get attention for your cause, a lot of Americans will respond by telling you and your cause to drop dead. If the NFL had respected its fans enough to keep politics off the field, it wouldn’t be in this mess and if these players cared about something other than “look at me,” they would have never engaged in such an offensive protest in the first place.