How the Liberal Media Created Charlottesville

John Hawkins
|
Posted: Aug 14, 2017 12:01 AM
Share   Tweet
The opinions expressed by columnists are their own and do not necessarily represent the views of Townhall.com. 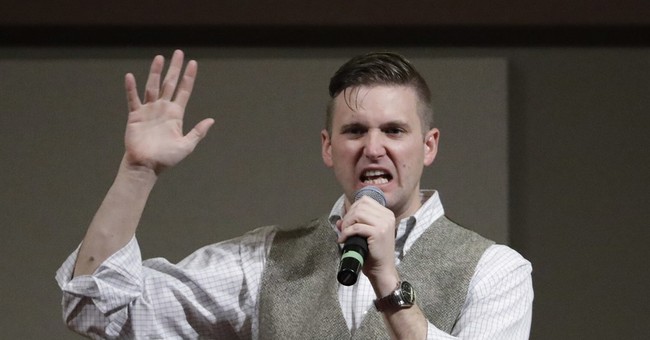 I wish I could say that it’s a shock that someone died in Charlottesville, but I’ve been predicting just this sort of thing in radio appearances for months. The liberal media is dying to blame it all on Donald Trump, but it should look in the mirror.

To begin with, the liberal media is almost entirely responsible for growing the Alt-Right merger of hate groups and internet trolls. Most people are well aware of the stifling political correctness that reached an apex under Barack Obama. People are sick and tired of being attacked and scolded by the humorless left-wing thought police every time they stray from the latest liberal doctrine. That created a large group of people who enjoyed tweaking social justice warriors and some of them realized the easiest way to do that was with racial slurs. Every time some doofus leaves a noose on a college campus or says the N-word, it’s treated like a national crisis. If you’re an anonymous troll who enjoys getting people to react to everything you say, that’s a FEATURE, not a bug. All you have to do is say something racially offensive and all these people who studiously try to ignore you will go out of their minds.

That racial element gave the Nazis, white supremacists and KKK mouth-breathers a way to connect with the more socially adept trolls making the Pepe the Frog memes. Of course, the media liberals fueled them as well with their hypocrisy. They painted EVERY white supporter of Donald Trump or the Republican Party as a racist even as they ignored and defended the vicious anti-white rhetoric that has become commonplace on the Left. Just to give you a quick example of that, there was a hashtag that trended on Twitter after the attack called #ThisIsNotUS. It started out as a way for white liberals to virtue signal, but it quickly turned into an all too typical attack on white people, America and Trump voters. Here are some of the most popular comments from the hashtag…

#ThisIsNotUs Then who is it? 63% of white men & 53% of white women voted for KKK-endorsed Trump. The majority of EVERY OTHER ETHNICITY didn’t

If you are white and you are trying to say #ThisIsNotUs you are part of the problem.

If you're earnestly tweeting #ThisIsNotUS, know that the you might as well have been one of the white supremacists walking w/ tiki torches.

#ThisIsNotUS? Easy to say so. Unfortunately you can't have the Black, Brown, Asian, Jewish, Muslim or LGTBQ "experience" to know #THISISYOU

Gaga, prime example of a white woman using tag #ThisIsNotUs like this country wasn’t built on slavery & racism. THIS HAS ALWAYS BEEN AmeriKa

#ThisIsNotUs is how white people try to absolve themselves from their complicity in white supremacy; it v much is you, your inaction fuels it

The biggest talking point white supremacists have are comments like these. Would that be true if the mainstream media actually treated these comments with the same sort of contempt it has for the Alt-Right?

On the other hand, white supremacists are nothing on the Right. David Duke is a joke. Richard Spencer? Let me tell you a little story about Richard Spencer. I was walking around CPAC and noticed an enormous gaggle of media surrounding someone I didn’t recognize, who didn’t seem to be drawing a crowd of regular attendees. As it turns out, the massive group of media people weren’t following a big name. They were following Richard Spencer, who was later kicked out of the conference, presumably because the organizers never wanted him there in the first place.

This creates a sort of Kim Kardashian effect. Ninety five percent of any influence Spencer has comes from the fact that anything he does is a big deal to the media. Why were Spencer and Duke able to gather even 500 Tiki torch-waving idiots in Charlottesville? Because the media would cover everything they did with bated breath. It gave them a chance to feel important, to feel like they were making an impact. In fact, white supremacists have started to believe their own BS because they keep hearing it from the media. After fighting with Richard Spencer on Twitter, I still remember one of his fans claiming that white supremacists were an essential part of Trump getting elected. My response was….

“Yeah, you guys made a bunch of Holocaust memes & called people cucks and then you're all....’I'm helping.’”

The hardcore racists out there are pariahs everywhere except in the mainstream media, where they’re treated as incredibly important.

On the other hand, the same mainstream media that has elevated the Alt-Right has been silent as violence has increasingly become a mainstay at liberal protests, including the counter-protest of this event. A few shops getting looted or people getting hurt doesn’t stop the media from describing a liberal event as a peaceful protest. Even the counter-protests in Charlottesville were widely described as “peaceful.” Yet, protesters chanted “From the Midwest to the South, punch a Nazi in the mouth,” a female reporter was punched by one of those counter-protesters, the organizer of the rally was hit, and other people were attacked. That’s not peaceful. That’s something LIBERAL POLITICIANS should be asked to condemn.

In other words, Nazi and KKK members are HORRIBLE. The violent liberal counter-protesters are ALSO horrible. James Alex Fields, Jr? Who appears to have marched at the rally before plowing into a crowd? I condemn what he did. I also condemn the Bernie supporter who shot up a congressional Republican softball game. Additionally, I will condemn the next person on the Left or the Right who kills someone over politics, which seems inevitable when you have opposing sides carrying shields and weapons to political rallies. Those condemnations don’t make a damn bit of difference as long as the liberal media keeps elevating white supremacists and excusing the violence of the Alt-Left. I’m genuinely sorry people are dying at political rallies, but it would be surprising if the death at Charlottesville were the last one. Their blood will be on the hands of the liberal media.