5 Reasons It's Dumb To Panic Over Global Warming

John Hawkins
|
Posted: Apr 01, 2017 12:09 AM
Share   Tweet
The opinions expressed by columnists are their own and do not necessarily represent the views of Townhall.com. 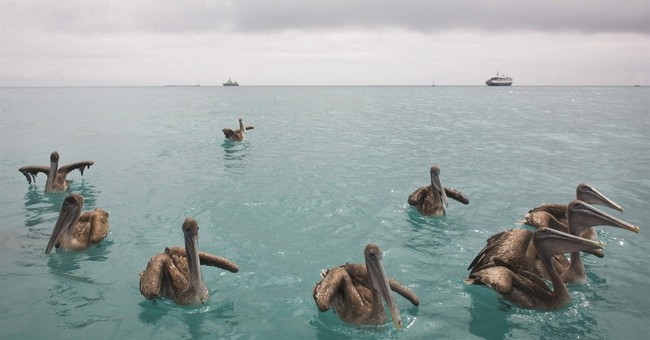 “In 2015, President Barack Obama created the Clean Power Plan to slow climate disruption. It was the first action ever taken by the US government to cut carbon pollution from existing power plants.

And this week, with the stroke of a pen, President Trump directed the Environmental Protection Agency (EPA) to take steps to end it.

Trump may have just signed a death warrant for our planet (at least, for a planet that is livable for humans). And the lies he told to justify it have real consequences for real Americans, here and now.” – Van Jones

"Historians in the near future will mark today, March 28, 2017, as the day the extinction of human life on earth began, thanks 2 Donald Trump....Trump has signed orders killing all of Obama's climate change regulations. The EPA is prohibited henceforth from focusing on climate change." -- Michael Moore

The liberal hysteria over global warming is hard for normal people to comprehend. Leftists don’t worry about deficits or about terrorists who are looking for any way to kill Americans. They don’t care about the health care costs they drove into the stratosphere, the way teachers’ unions have ruined public education, or the out-of-control growth of the federal government that takes more of our money and freedom every day. However, the possibility of global warming 100 years from now freaks them the hell out. Then the rest of us get treated to people -- who don’t know anything about global warming other than “I heard it is scientific consensus” and “What about the polar bears?” -- screaming about how the rest of us are wrecking the planet.

Settle down, snowflake! There’s no reason to panic over global warming. Why?

1) There Is Actually No Scientific Consensus On Global Warming. The idea that 97% of scientists buy into the idea that global warming is happening and that it’s caused by man is simply untrue. For example, “A 2012 poll of American Meteorological Society members also reported a diversity of opinion. Of the 1,862 members who responded (a quarter of the organization), 59 percent stated that human activity was the primary cause of global warming, and 11 percent attributed the phenomenon to human activity and natural causes in about equal measure, while just under a quarter (23 percent) said enough is not yet known to make any determination.”

Then, last year, it was found that, “Nearly six in ten climate scientists don’t adhere to the so-called ‘consensus’ on man-made climate change, a new study by the Dutch government has found.” Do the majority of scientists buy into the idea of man-made global warming? Probably. But that’s a far cry from some “scientific consensus” that all of us should respect.

2) Even If Global Warming Is Happening And Mankind Is Responsible, It May Still Make Sense To Do Nothing.

Bjorn Lomberg has been the main proponent of this line of reasoning, so here’s an excerpt from him on the subject.

“U.S. Secretary of State John Kerry calls climate change ‘perhaps the most fearsome weapon of mass destruction,’ and claims that unless we act, it could pose ‘the most catastrophic, grave threats in the history of human life.’ Yet, the UN Climate Panel finds the total cost of climate change by the 2070s is less than 2% of GDP. This means global warming is a problem, but it is not by any means the end of the world. Its cost is equivalent to a single year of recession over the next 60 years.

Compare it to the very real challenges that the world faces right now. The world’s biggest environmental problem is indoor air pollution, which the World Health Organization estimate kills 4.3-million people each year. Almost 3 billion people cook and keep warm with polluting, open fires. The solution is to get cheap energy to the poorest half of the world, which inevitably means mostly fossil fuels.”

Put another way, obsessing over global warming is like worrying about a broken fingernail after you’re hit by a bus that breaks a dozen bones. If we’re going to pour titanic amounts of money, time and effort into something, global warming should be pretty far down the list.

3) Global Warming Theories Are More Art Than Science. We live in a world where scientists can’t tell us for sure whether it’s going to rain TOMORROW, but yet we still have people assuring us of what the weather is going to be like in 100 years. Wait, is that too much of a cheap shot? Then how about noting the fact that climate models used to predict global warming have been consistently and egregiously wrong for decades.

Climate models used by scientists to predict how much human activities will warm the planet have been over-predicting global warming for the last six decades, according to a recent working paper by climate scientists.

Michaels and Knappenberger compared observed global surface temperature warming rates since 1950 to what was predicted by 108 climate models used by government climate scientists to predict how much carbon dioxide emissions will warm the planet.

What they found was the models projected much higher warming rates than actually occurred.

...'This is a devastating indictment of climate model performance,” Michaels and Knappenberger write. “For periods of time longer than about 20 years, the observed trends from all data sources fall beneath the lower bound which contains 95 percent of all model trends and in the majority of cases, falls beneath even the absolute smallest trend found in any of the 102 climate model runs.'

What people don’t want to tell you is that no one really understands how our climate works. Don’t get me wrong, there are scientists who know an enormous amount about it, but there are huge gaps in their knowledge that make it impossible for them to predict what’s going to happen long term. Unfortunately, you don’t get on TV and get piles of grant money for saying, “There’s no way to know much about global warming until we can better understand the climate.”

4) We Don’t Have A Good Way To Even Know What Temperatures Were Centuries Ago. You often hear claims that every year is supposedly the “hottest on record.” Yet, we only started doing meaningful worldwide measurements in 1880 and many of those early numbers are considered to be unreliable. I guess the hottest year since 1880 – maybe – just doesn’t have the same ring. Moreover, much of the data from those early reports has been massaged to produce questionable results. For example, you can make a good case that the hottest years in the United States were in the mid-1930s, not today. Moreover, there’s a lot of speculation that may or may not be accurate that goes into the data. If you look at the “record breaking” heat of 2016, you find that it may not be “record breaking” at all.

But in reality, there’s just not much data at the poles. here are no permanent thermometers at the North Pole, since sea ice drifts are unstable, and melt in the summer, as they have for millennia. Weather stations can’t be permanent in the Arctic Ocean. So, the data is often interpolated from the nearest land-based thermometers.

...So you can see that much of the claims of 'global record heat' hinge on interpolating the Arctic temperature data where there is none.

...As for the Continental USA, which has fantastically dense thermometer coverage as seen above, we were not even close to a record year according to NOAA’s own data.

In other words, if you look at the reliable data we actually have, 2016 wasn’t even close to a record-breaking year. So, we get claims that it’s extremely warm in areas where there’s dodgy data, and that means it’s the “hottest year on record.” Do we really want to spend trillions of dollars and change our entire way of life based on that?

5) We’re In The Middle Of A Global Warming “Pause.” How can we be in a “pause” if liberals are claiming we just broke a new record every year? Because these “record-breaking years” are within the statistical margin of error. For example, no one can say definitively that 2016 was warmer than 1998.

This is a controversial topic, and there are plenty of liberals claiming that the global warming pause has been disproved – except it hasn’t. In fact, if the climate models were accurate – 2016 would have blown right past the 1998 numbers. Since it hasn’t, anyone who really cares about science – as opposed to just using it as a political cudgel – should be asking some hard questions.

Spencer Brown
Ocasio-Cortez: We Need to Pack the Court Because There's No Checks and Balances
Matt Vespa