10 Examples of “Hate Crimes” That Turned Out to be Scams

John Hawkins
|
Posted: Mar 04, 2017 12:01 AM
Share   Tweet
The opinions expressed by columnists are their own and do not necessarily represent the views of Townhall.com. 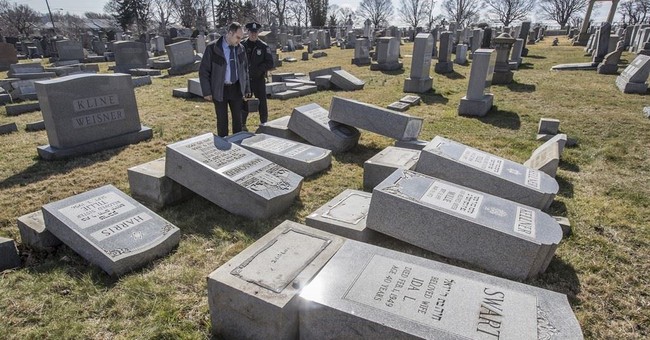 We have so many people faking hate crimes that if you assume every one of them is a scam, you’d be right more often than you’re wrong. When you combine the liberal desire to get attention for being a victim with the possibility of making serious money on GoFundMe, it creates an enormous incentive to fake it. Add to that the possibility that what you do will be blamed on people you detest for not agreeing with you and there are liberals who are willing to lie. As you are about to see, there are a lot of them. I’m giving you 10 examples, but the actual number of “hate crimes” revealed to be fake gets up into the hundreds during this same period. Just to show the scope of the problem, I’m only going to use examples from 2015 or later.

1) “The allegation set social media ablaze, sowing shock and outrage as it went: Three black students at the University at Albany had been attacked on a city bus by a group of white men who used racial slurs as other passengers and the driver sat silently by.

The Jan. 30 episode, reported to the police, would draw hundreds of people to a campus rally against racism; an emotional response from the university’s president; and even the attention of Hillary Clinton, who condemned the attack on Twitter.

…Surveillance videos did not support the accounts of the young women, Ms. Burwell, Alexis Briggs and Ariel Agudio. Neither did the statements of multiple fellow passengers. Rather than being victims of a hate crime, the authorities said, the women had been ‘the aggressors,’ hitting a 19-year-old white woman on the bus.

All three pleaded not guilty on Monday to misdemeanor assault charges; Ms. Burwell and Ms. Agudio, who publicized the episode through Twitter, also pleaded not guilty to charges of making a false report. The judge who oversaw the arraignment called the charges, if proved, ‘shameful.’”

2) “The man behind the bomb threats to

The FBI arrested Juan Thompson for making about eight bomb threats to various Jewish community centers, schools and organizations in the country. Thompson, a former journalist at The Intercept and potential communist, has a Twitter page filled with anti-Trump comments.

3) “An African-American man in Malden, Massachusetts has now admitted that he fabricated a hate crime report when he claimed two white men accosted him, saying the U.S. is now ‘Trump country,’ and threatened to lynch him.

A man in the suburb north of Boston told police on Tuesday that he was accosted by two white men after getting off a Boston mass transit bus near Broadway Square in Malden.

The complainant, who has remained unidentified, said the men used racial slurs and warned him he would soon be lynched because the U.S. is now ‘Trump country.’ The man said he ran away and hid, waiting for the men to go away before calling police.

Malden police immediately prioritized the report as a ‘hate crime’ and an investigation was opened. But now police are reporting that their investigation revealed a hoax had been committed.”

Students claimed that an image of an untied rope laid on the ground was a noose placed on the Lincoln Park campus by a student who was animated by Yiannopoulos’ lecture that occurred last week. Students reported the “noose” to campus security, who claimed that they are investigating the incident.

Before last week’s stop of “The Dangerous F@ggot Tour,” someone vandalized the sidewalk with the words, ‘TRUMP 2016 F*CK MEXICO.’ Students were quick to complain to DePaul administrators about the message. According to a University press release, the message was difficult to remove because it was written in paint rather than chalk.

…DePaul University president Dennis Holtschneider commented on the incident and condemned the individual responsible for the vandalism. “Destruction of property and profanity are never acceptable ways to voice opinions,” Holtschneider wrote in his statement. “This slur against Mexicans goes against everything DePaul stands for.”

Peter Myers, a graduate student at DePaul, was arrested by Chicago PD for criminal damage to private property. Myers, who studies ‘poverty and inequality’ in DePaul’s Economics and Mathematics department, participated in several Occupy Chicago protests.

Shortly after the vandalism, he wrote on Facebook that he ‘did the right thing TRUMP 2016 stood up for economic reform and a rigged system the dollar scholar would be proud[.]’”

5) “A student at a Wisconsin college was arrested for defacing his own dorm room door with anti-Muslim graffiti in order to get attention, according to police.

Officials at Beloit College in Beloit, Wisconsin, were shocked when a student, 20-year-old Michael Kee, reported that anti-Muslim threats appeared on his door and on a wall outside his dorm room. The student told police he felt he was being threatened over his religion and ethnicity.

Police initially treated the incident as a hate crime, but after an investigation they determined that the student had perpetrated a fraud and painted the graffiti himself, according to WQRF.”

6) “Jasskirat Saini was arrested Tuesday by Nassau County Police following an investigation into the drawing swastikas and writing of ‘KKK’ on a college campus.

ABC7 reports that the swastikas were first found at Nassau Community College on a men’s bathroom on Oct. 15 and later that month several more were found. In December there were two more incidents of swastika graffiti. Nassau County Police found Saini Tuesday writing two swastikas on the exterior of a building and ‘KKK’ on the floor of another, ABC7 reports.

Saini is being charged with Aggravated Harassment and according to ABC7 this charge is in connection with 110 anti-Semitic drawings.

7) “A North Texas man has confessed to his wife that it was he who spray-painted their garage with hateful rhetoric and lit their truck and motorcycle on fire earlier this month.

Jenny Williams lamented the actions of her husband David on Facebook Dec. 21, saying he confessed to staging the crimes their family awoke to Dec. 12— ‘N----- lover’ was cast across their garage in black spray paint and the family's motorcycle and truck were set ablaze, she said in a since-deleted blog post. In photos on her blog, accessed through a cached version, the family's truck is burned and missing headlights.”

8) “A Bowling Green State University official announced Friday that a man’s story that he was pushed to the ground, robbed, and called a derogatory slur wasn’t true.

Thomas Gibson, vice president for student affairs and vice provost, sent an email updating students about the investigation. He said filing a false report is a serious offense, but did not elaborate on the incident.

A man previously said two assailants pushed him to the ground and robbed him about 4 p.m. Tuesday behind the Student Recreation Center. They then called him a derogatory slur, according to a university spokesman.”

9) “Police were investigating the burning of an African American church in Mississippi as a hate crime after graffiti reading ‘vote Trump’ was found spray painted on an outside wall. But now authorities have reported that a black man has been arrested for the crime and race hate has been abandoned as a motive.”

10) “The Muslim charged with arson of his own mosque on Christmas Day 2015 has pleaded guilty to felony arson in a Harris County (Houston) district court and was sentenced to prison.

The charging instrument stated that Gary Nathaniel Moore started a fire with the intent to destroy and damage a place of worship – the Savoy Masjid Mosque in Houston. Moore said he attended the mosque every day up to five times a day for five years. The Houston Fire Department (HFD) responded to the fire about 2:47 p.m. on Christmas Day.

Breitbart News reported that ‘up in smoke is the DC Media’s hoped-for anti-GOP Narrative. Before any facts were known, numerous DC Media outlets immediately exploited the tragedy to place the blame on Donald Trump.’ As reported by Breitbart Texas, Breitbart News accurately predicted that the DC media would lose interest in the story ‘Now that a devout Muslim has been charged.”