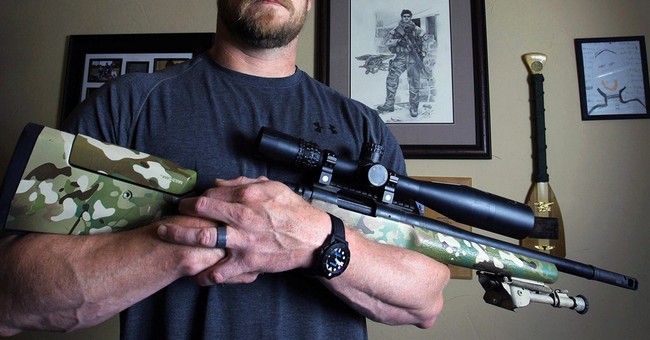 1) “In Vietnam, our soldiers came back and they were reviled as baby killers, in shame and humiliation. It isn’t happening now, but I will tell you, there has never been an [American] army as violent and murderous as our army has been in Iraq.” —Seymour Hersh

2) “I haven't seen American Sniper, but correct me if I'm wrong: An occupier mows down faceless Iraqis but the real victim is his anguished soul.” – Max Blumenthal

3) “Put a man in uniform, preferably a white man, give him a gun, and Americans will worship him. It is a particularly childish trait, of a childlike culture, that insists on anointing all active military members and police officers as ‘heroes.’ The rhetorical sloppiness and intellectual shallowness of affixing such a reverent label to everyone in the military or law enforcement betrays a frightening cultural streak of nationalism, chauvinism, authoritarianism and totalitarianism, but it also makes honest and serious conversations necessary for the maintenance and enhancement of a fragile democracy nearly impossible….” -- David Masciotra at Salon

4) “American fighters of the Pacific War were not heroes. The desperation of island combat included exchanged barbarities of which no one would willingly speak for a generation. On the American side, there were foul racism, vengeful refusals to take prisoners, a generalized brutality that extended to a savage air war.” —James Carrollin the Boston Globe

5) “…(P)erhaps some readers will understand why my friends and I rip yellow ribbon ‘support the troops’ magnets off of cars or wherever people have affixed them. By ripping off these ribbons, we find a way to deal with our guilt, as though with each ribbon swiped we take back a life that was taken by this senseless war started by our senseless president and those who support him.

I will never say, ‘support the troops.’ I don’t believe in the validity of that statement. People say, ‘I don’t support the war, I support the troops’ as though you can actually separate the two. You cannot; the troops are a part of the war, they have become the war and there is no valid dissection of the two. Other people shout with glaring eyes that we should give up our politics, give up our political affiliations in favor of ‘just supporting the troops.’ I wish everything were that easy.” —Thomas Naughton at the Daily Collegian

7) “My uncle killed by sniper in WW2. We were taught snipers were cowards. Will shoot u in the back. Snipers aren’t heroes. And invaders r worse.”— Michael Moore

8) “What outrages me as a representative of journalists is that there’s not more outrage about the number, and the brutality, and the cavalier nature of the U.S. military toward the killing of journalists in Iraq….They target and kill journalists … uh, from other countries, particularly Arab countries like Al -, like Arab news services like Al-Jazeera, for example. They actually target them and blow up their studios with impunity….” — Newspaper Guild President Linda Foley

9) “Democrat flaks jump on this like ducks on a June-bug, and in the process themselves reproduce the sick militarism of this culture that automatically valorizes anyone who wears a uniform. How dare you insult a soldier! Like its some sacred calling instead of an imperial employment program steeped in the culture of machismo and misogyny.(And you can gasp as theatrically as you want… I spent more than two decades wearing a uniform… that is exactly what it is.)” —Stan Goff at the Huffington Post

10) “Is your enemy the state?
Befriend a recruiter and keep your friends close and your enemies closer!…

This campaign is not about (badgering?) recruiters. It is solely about making friends and finding out more about the military that you don’t trust…

11) “THE United States now has a mercenary army. To be sure, our soldiers are hired from within the citizenry, unlike the hated Hessians whom George III recruited to fight against the American Revolutionaries. But like those Hessians, today’s volunteers sign up for some mighty dangerous work largely for wages and benefits….” —David M. Kennedy in the New York Times

12) “You know, education, if you make the most of it, if you study hard and you do your homework, and you make an effort to be smart, uh, you, you can do well. If you don’t, you get stuck in Iraq.” —John Kerry

13) “If a young fella has an option of having a decent career or joining the army to fight in Iraq, you can bet your life that he would not be in Iraq.” —Charles Rangel

14) “For someone who was responsible for, again, nobody knows, but a certain amount of death of innocent people as John McCain was, the time spent in a North Vietnamese prison where he claims to have been tortured was probably time spent that a Catholic priest, for example, would find completely understandable. It’s called doing penance, John. You don’t bomb and kill people for no reason, even when corporate America or your daddy, who was the supreme commander of Southeast Asian forces, South Pacific forces, orders you to do it. You can’t just take orders, we decided that at Nuremberg. So, if you suffered, I am sorry for your suffering, I truly am, in and of itself, but John-John-John, did you think about the suffering of the people you bombed and strafed? They were civilians, you know.” —Mike Malloy

16) “(It’s) very difficult to talk about the war dead and the fallen without invoking valor, without invoking the words ‘heroes.’ I feel … uncomfortable about the word hero because it seems to me that it is so rhetorically proximate to justifications for more war.” —Chris Hayes

17) “Our troops overreacted because of the pressure on them, and they killed innocent civilians in cold blood.” —John Murtha smears the troops on Haditha

18) “The recent shootings at Ft. Hood and the resignation of top Foreign Service officer Matthew Hoh demonstrate how even our military officers are opposed to US strategy in Afghanistan.” —Code Pink

19) "A lot of (Kyle's) stories when he was back home in Texas, a lot of his own personal opinions about what he was doing in Iraq, how he viewed Iraqis. Some of what people have described as his racist tendencies towards Iraqis and Muslims when he was going on some of these, you know, killing sprees in Iraq on assignment. So I think there are issues... When he was involved in his -- on assignments in terms of what he was doing. A lot of the description that has come out from his book and some of the terminology that he has used, people have described as racist." -- MSNBC's Ayman Mohyeldin

21) “I don’t want to sound like an ad, a public service ad on TV, but the fact is if you can read, you can walk into a job later on. If you don’t, then you’ve got, the Army, Iraq, I don’t know, something like that. It’s, it’s not as bright. So, that’s my little commercial for that.” —Stephen King

22) “Through every Abu aib and Haditha, through every rape and murder, the American public has indulged those in uniform….We pay the soldiers a decent wage, take care of their families, provide them with housing and medical care and vast social support systems and ship obscene amenities into the war zone for them, we support them in every possible way, and their attitude is that we should in addition roll over and play dead, defer to the military and the generals and let them fight their war, and give up our rights and responsibilities to speak up because they are above society?…[T]he recent NBC report is just an ugly reminder of the price we pay for a mercenary — oops sorry, volunteer — force that thinks it is doing the dirty work.” —Washington Post blogger, William Arkin

23) “I think Bowe Bergdahl, if he deserted, is a hero – I think throughout history we should build monuments to the unknown deserters.” – Bill Ayers

25) “For those of you who do, as a matter of principle, oppose war in any form, the idea of supporting a conscientious objector who’s already been inducted [and] in his combat service in Iraq might have a certain appeal. But let me ask you this: Would you render the same support to someone who hadn’t conscientiously objected, but rather instead rolled a grenade under their line officer in order to neutralize the combat capacity of their unit?”

Later, in a question-and-answer period, Churchill was asked whether the trauma “fragging” inflicts on that officer’s family back home should be considered, he responded: “How do you feel about Adolf Eichmann’s family?” — From Ward Churchill via WorldNetDaily