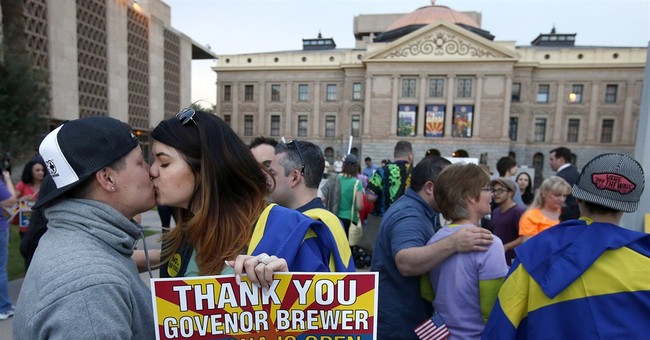 Future historians will likely be flummoxed by the moment we’re living in. In what amounts to less than a blink of an eye in the history of Western civilization, homosexuality has gone from a diagnosed mental disorder to something to be celebrated — or else. Indeed, the rush to mandatory celebration is so intense, refusal is now considered tantamount to a crime. And, in some rare instances, an actual crime if the right constable or bureaucrat concludes that you have uttered “hate speech.” -- Jonah Goldberg

For a free society to function, a wide range of speech and behavior has to be tolerated, but that doesn't mean everyone has to approve of it. So, for example, although I don't drink, I have many friends who do. While I think Justin Bieber's music is appalling, I don't think it should be illegal. While I would like to see abortion banned except in the case of rape, incest and danger to the life of the mother, I have friends who've admitted to me that they've had abortions.

Unfortunately, when it comes to gay marriage, we have people who seem to be unable to tell the difference between tolerance and approval. It's not enough that gay marriage is legal in 17 states. As a practical matter, that means every gay American in the country can get married if he or she wants to do so while those who don't want gay marriage also have the option to live in states where the practice isn't legal. Although some Americans would like gay marriage to be legal everywhere and others, like myself, would like it to be illegal everywhere, there's something to be said for leaving the matter to each state.

This is still not enough for many liberals who've insisted on going further and actually persecuting Christian businesses who oppose gay marriage. Christians who don't want to sanction gay marriage are being sued, prosecuted and driven out of business for doing nothing more than living up to their Christian beliefs, which are incompatible with condoning gay marriage. In Oregon, Sweet Cakes by Melissa faced fines from the state and eventually lost its business because the owners declined to bake a cake for a gay wedding. In Washington State, florist Barronelle Stutzman has been sued for refusing to provide flowers for a gay wedding. The Wildflower Inn in Vermont was sued for refusing to host a gay couple’s wedding reception. Christian photographer Elane Huguenin in New Mexico was told she wasn't allowed to decline to participate in a gay marriage commitment ceremony. In New Jersey a seaside retreat, which is a United Methodist Church Christian facility, was told it wasn’t allowed to refuse a civil union ceremony.

Whether you believe as I do that all of those businesses made the right choice when they refused to sanction gay marriage, you should at least believe that they have the right to make their own decisions. Here's why....

1) Businesses should generally have the right to refuse customers: Because of slavery, segregation, Jim Crow and the other abominations Democrats forced on America, we did choose as a nation to treat race differently than most other issues. So, we do not allow businesses to discriminate based on race -- and that's a good thing. However, businesses can and do turn away customers for almost every other reason imaginable. Shouldn't they be able to do that?

2) It violates the First Amendment: Per the First Amendment, "Congress shall make no law respecting an establishment of religion, or prohibiting the free exercise thereof; or abridging the freedom of speech, or of the press; or the right of the people peaceably to assemble, and to petition the Government for a redress of grievances."

Supporting gay marriage is incompatible with Christianity. Baking a cake for a gay marriage, renting out a building for it, taking the pictures, etc., etc. could very fairly be considered sanctioning the marriage. To force a Christian to do that violates the First Amendment. This entire column could consist of that one point and it should be sufficient, but let's do continue on.

3) It's a misguided attempt to legally force people to accept gay marriage: In a very real sense, the gay marriage fight isn't about gay marriage. Civil unions confer all the same rights as marriage and the biggest point of contention on civil unions has become that they're being used as a stepping stone to gay marriage. If that wasn't an issue, civil unions would have overwhelming support and then everybody would be happy, right? Wrong. Because again, gay marriage isn't really about that.

At its core, gay marriage is really about acceptance.

The Left loves to encourage gay Americans to define their life by their sexual orientation, which cruelly sets people up for disappointment. It's now common to hear liberals say things like, "Oh well, in 20 years everybody will approve of gay weddings." Of course, liberals were saying the same thing about abortion after Roe v. Wade and how did that work out? Oh...right.

The truth is nobody gets universal acceptance. There are people who don't like me because I'm a white, conservative, Christian, male Tea Partier. I know this because I get emails and Facebook messages from them telling me so almost every day. There are a lot of terrific human beings out there who are gay, but if they make the mistake of demanding universal acceptance of everything about their sexual orientation a condition of being content, they're likely to have long, unhappy lives.

4) It's anti-Christian: There's an intense dislike of Christianity on the Left and it's an order of magnitude more intense for gay liberals for obvious reasons. Although as Billy Graham has said, "God will not judge a Christian guilty for his or her involuntary feelings," Christianity doesn't condone homosexual behavior. Under the best of circumstances, few people want to hear that they're doing something immoral. It's even worse when people feel as if they're being judged for something they believe would be difficult or even impossible to change. So, some of the people who are put in that position love getting an opportunity to victimize a poor Christian baker or florist because it allows them to lash out at Christianity by proxy. Since these Christians are paying a big price for standing up for our faith, they deserve our support.

5) It's involuntary servitude: It's highly ironic that liberals have compared a baker choosing not to bake a cake for a gay wedding to slavery and Jim Crow laws. After all, the Christian businesses are the ones that are being forced into involuntary servitude for ungrateful, vicious masters. Ask yourself why anyone with good motives would want to FORCE an unwilling person to bake his or her wedding cake or take pictures at his or her wedding? What's next? Will people who don't respond to invitations to gay weddings be charged with a hate crime?