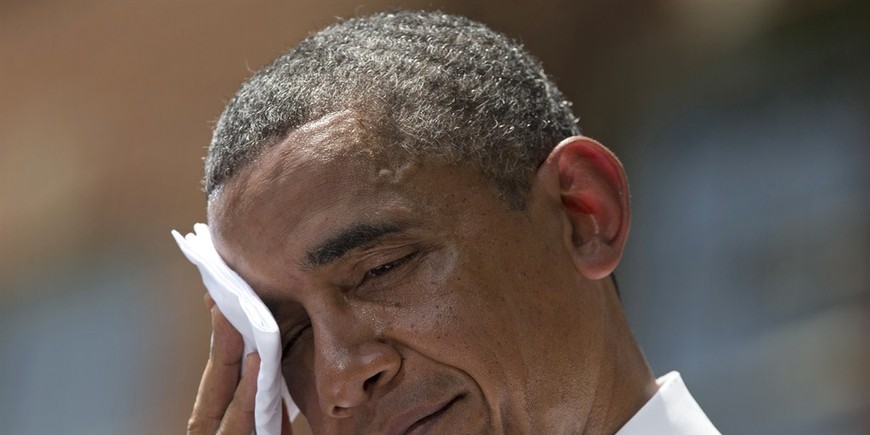 How did global warming discussions end up hinging on what's happening with polar bears, unverifiable predictions of what will happen in a hundred years, and whether people are "climate deniers" or "global warming cultists?" If this is a scientific topic, why aren't we spending more time discussing the science involved? Why aren't we talking about the evidence and the actual data involved? Why aren't we looking at the predictions that were made and seeing if they match up to the results? If this is such an open and shut case, why are so many people who care about science skeptical? Many Americans have long since thought that the best scientific evidence available suggested that man wasn't causing any sort of global warming. However, now, we can go even further and suggest that the planet isn't warming at all.

1) There hasn't been any global warming since 1997: If nothing changes in the next year, we're going to have kids who graduate from high school who will have never seen any "global warming" during their lifetimes. That's right; the temperature of the planet has essentially been flat for 17 years. This isn't a controversial assertion either. Even the former Director of the Climate Research Unit (CRU) of the University of East Anglia, Phil Jones, admits that it's true. Since the planet was cooling from 1940-1975 and the upswing in temperature afterward only lasted 22 years, a 17 year pause is a big deal. It also begs an obvious question: How can we be experiencing global warming if there's no actual "global warming?"

2) There is no scientific consensus that global warming is occurring and caused by man: Questions are not decided by "consensus." In fact, many scientific theories that were once widely believed to be true were made irrelevant by new evidence. Just to name one of many, many examples, in the early seventies, scientists believed global cooling was occurring. However, once the planet started to warm up, they changed their minds. Yet, the primary "scientific" argument for global warming is that there is a "scientific consensus" that it's occurring. Setting aside the fact that's not a scientific argument, even if that ever was true (and it really wasn't), it's certainly not true anymore. Over 31,000 scientists have signed on to a petition saying humans aren't causing global warming. More than 1000 scientists signed on to another report saying there is no global warming at all. There are tens of thousands of well-educated, mainstream scientists who do not agree that global warming is occurring at all and people who share their opinion are taking a position grounded in science.

3) Arctic ice is up 50% since 2012: The loss of Arctic ice has been a big talking point for people who believe global warming is occurring. Some people have even predicted that all of the Arctic ice would melt by now because of global warming. Yet, Arctic ice is up 50% since 2012. How much Arctic ice really matters is an open question since the very limited evidence we have suggests that a few decades ago, there was less ice than there is today, but the same people who thought the drop in ice was noteworthy should at least agree that the increase is important as well.

4) Climate models showing global warming have been wrong over and over: These future projections of what global warming will do to the planet have been based on climate models. Essentially, scientists make assumptions about how much of an impact different factors will have; they guess how much of a change there will be and then they project changes over time. Unfortunately, almost all of these models showing huge temperature gains have turned out to be wrong.

There's an old saying in programming that goes, "Garbage in, garbage out." In other words, if the assumptions and data you put into the models are faulty, then the results will be worthless. If the climate models that show a dire impact because of global warming aren't reliable -- and they're not -- then the long term projections they make are meaningless.

5) Predictions about the impact of global warming have already been proven wrong: The debate over global warming has been going on long enough that we've had time to see whether some of the predictions people made about it have panned out in the real world. For example, Al Gore predicted all the Arctic ice would be gone by 2013. In 2005, the Independent ran an article saying that the Artic had entered a death spiral.

Scientists fear that the Arctic has now entered an irreversible phase of warming which will accelerate the loss of the polar sea ice that has helped to keep the climate stable for thousands of years....The greatest fear is that the Arctic has reached a “tipping point” beyond which nothing can reverse the continual loss of sea ice and with it the massive land glaciers of Greenland, which will raise sea levels dramatically. Of course, the highway is still there.

Meanwhile, Arctic ice is up 50% since 2012. James Hansen of NASA fame predicted that the West Side Highway in New York would be under water by now because of global warming.

If the climate models and the predictions about global warming aren't even close to being correct, wouldn't it be more scientific to reject hasty action based on faulty data so that we can further study the issue and find out what's really going on?