15 Reasons Why Barack Obama Is the Greatest President In American History! 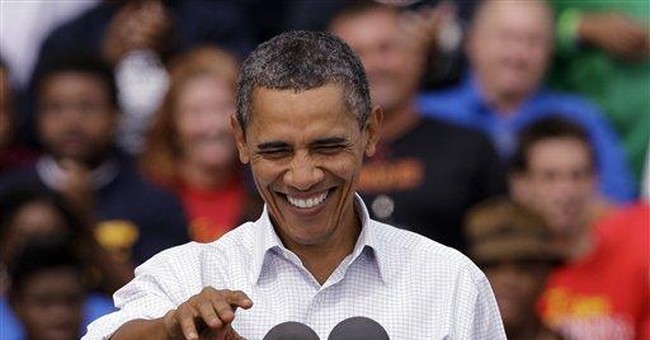 2) Parents all across the country can now point to Barack Obama's performance when they're explaining to their children why they shouldn't use drugs.

4) Thanks to healthcare.gov, "New Coke" no longer has to bear the shame of being the worst product roll-out in American history.

5) Because of Obama, 91 million people without jobs now have plenty of time to spend with their family.

6) He extended childhood all the way up to 26 by allowing "children" to stay on their parents insurance until then.

8) No President in American history has done more to further gun sales than Barack Obama.

9) Without Barack Obama, none of us would have ever heard the name Sandra Fluke and what a tragedy that would be!

10) He has already broken Bill Clinton's record for the most lies told in one presidency with three years left to go in office.

11) When the SEALS asked for permission to kill Bin Laden, he didn't insist that they merely give Osama a good talking to instead.

12) He has worked tirelessly to know the American people better through invasive TSA searches, reading their emails, and listening in on their phone calls.

13) He's living proof that even a pothead who thinks there are 57 states can still live the American dream.

14) Because of Obama's economic policies, more Americans than ever have gotten to experience the sweet, sweet joy of funemployment!

15) Obama's policies are so bad that even real racists have stopped hating him for being black and hate him for his failed policies.