8 Reasons The Republican Party Has A Bright Future 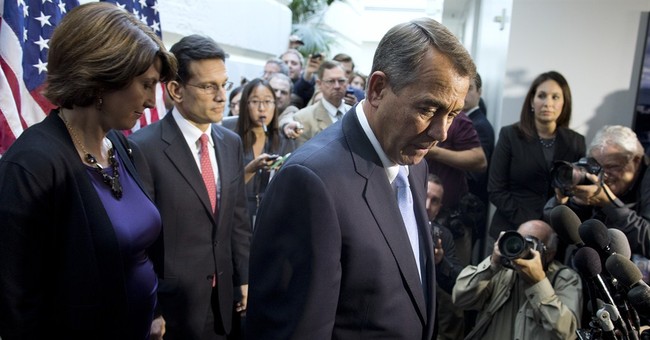 Losing to Barack Obama in 2012 shook the confidence of many Republicans and it's easy to understand why. After all, if you lose to the worst President in history, what does that say about you? Combine that with the frustrations so many conservatives have with the GOP and it's easy to write off the Republican Party. However, it's often darkest before the dawn and many people are missing the fact that the GOP is well positioned to thrive over the next couple of decades.

2) 2010 was the GOP's best year since 1948: It's funny to hear, "The Republican Party can't win anymore," when the GOP had its best year since 1948 less than three years ago. In the 2010 election, the GOP added 6 Senate seats, 63 House seats, and 680 seats in state legislatures around the country. Does that sound like a party that can't win any more? Does that sound like a party that's dying?

5) Our numbers with minorities are only going to go up: White Americans tend to vote Republican while black and Hispanic Americans tend to vote Democrat. Because demographically there are going to be more black and Hispanic Americans in the coming years, some people think that means the GOP is in deep trouble. Of course, that sort of thinking assumes the GOP will continue to get the same percentage of the black and Hispanic vote that it has always gotten. In actuality, since the GOP has done no outreach of significance in past years, we have every reason to think that our current numbers with minorities are a floor, not a ceiling. The GOP made its first real attempt to showcase minority Republicans during the last GOP convention and the RNC has just begun to pour serious money and manpower into minority outreach. It won't happen overnight, but our numbers with minorities are going to go up significantly in coming years.

6) Short Term: Obamacare means a strong 2014: All the GOP needs to do to have a great 2014 is hammer away relentlessly at Obamacare and highlight scandals like Fast and Furious, the IRS persecution of the Tea Party, and Benghazi next summer while taking care not to aggravate the base. If we do just those three things, we're practically guaranteed to pile on even more seats in the House and we'll have a better than even chance of taking back the Senate.

7) Barack Obama gives us a medium term opening: Barack Obama really is the single worst President in American history. The economy has been bad the entire time he's been in the White House; there are 10 million more Americans out of work than when he came into office. He's incredibly divisive, his foreign policy is in chaos, and his signature achievement is the Hindenburg of government policies. Conservatives have seen how bad he was from day one, but many other Americans are just starting to figure it out. After finally concluding that Democrats can't govern, the American people are going to be much more willing to give the GOP a chance to prove Republicans have what it takes over the next few election cycles.

8) Long term, the ground is very unfavorable to the Democrats: As Grover Norquist likes to say, the Democrats are made up of competing parasitic interest groups. So, when Democrats get into office, they immediately start doling out taxpayer money to their allies to keep them in line. Margaret Thatcher identified the coming problem with that strategy long ago when she said, "The trouble with socialism is that eventually you run out of other people's money." Unfortunately for all of us, we have a little too much socialism in this country and we are indeed running out of other people's money. This is bad for the country in general, but it's catastrophic for the Democrats whose entire electoral model is centered around recklessly spending money. The unions, which gulp down an inordinately large slice of the taxpayer pie, are already starting to pay the price. Their membership is down to its lowest level since the thirties and even liberal Meccas like Detroit are slashing their pensions down to nothing because they're out of money and have no other choice.

If we want out children to have the same opportunities and bright future that previous generations of Americans have grown up with, then this country needs a conservative Republican Party to dominate our political process over the next couple of decades. We're going to have the opportunity to save our country and the only question left is whether we're up to the challenge.