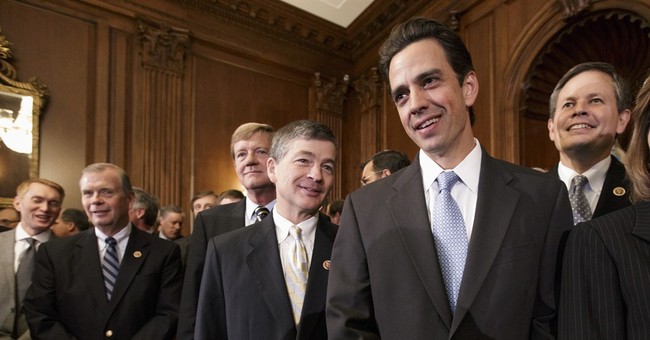 It's frustrating enough that the Republican Party shoots itself in the foot over and over again, but it's particularly aggravating that the ones who do it always seem to think of themselves as the smartest people in the room. Well, if they're so smart and know what we have to do "to win," then why is it that they do so many selfish and stupid things? Even if you set ideology completely aside, how much sense does it make for Republicans to make elementary mistakes like...

1) Join "gangs" to help Democrats achieve THEIR policy goals: Do you ever notice that Barbara Boxer, Chuck Schumer, and Harry Reid don't ever join any "gangs" of Republicans that are trying to undermine Democrat policies? You're never going to see a "Gang of 8" or "Gang of 12" that's trying to help pro-lifers or defend the 2nd Amendment. So how much sense does it make for Republicans to join "gangs" of Democrats when the only question is how badly conservatives are going to lose out

2) You don't bend over backwards to help the other side: Hey, Chris Christie, when your state is hit by a hurricane near the close of a presidential election, you don't do everything humanly possible to make Barack Obama look good at the expense of Mitt Romney. When there's a shutdown fight, Republicans like John McCain, Lindsey Graham, and Peter King shouldn't be publicly telling the world that the Republican Party is at fault. When that sort of open sabotage is rewarded, it pumps rat poison into the veins of the GOP.
CARTOONS | Margolis & Cox
View Cartoon
3) Republican politicians shouldn't trash the grassroots: There's not a Republican politician alive who should have a single negative thing to say about the Tea Party, big conservative groups, or conservative radio talk show hosts. Politicians can state their own position on an issue or politely distance themselves from controversial comments, but a politician shouldn't trash a person or group who's important to the party unless he or it is DEAD TO THAT POL AND THE GOP. If they matter, then mind your manners or expect to get figuratively slapped in the mouth until you do. 4) You don't lock out conservative groups: Can you imagine the SEIU having a hostile relationship with Harry Reid or Planned Parenthood having to publicly criticize Nancy Pelosi to get her to fight for abortion? Of course, not. Yet, the GOP has a TERRIBLE relationship with powerful conservative groups. The GOP leadership doesn't listen to big conservative groups, it doesn't strategize with them and it generally treats them like interlopers instead of organizations that represent tens of millions of conservatives. We've gotten to the point where the buffoons at the NRSC are even publicly attacking the Senate Conservatives Fund and then these geniuses are eternally baffled as to why conservatives don't trust them. If you consider yourself a "leader" in the Republican Party, then you have a responsibility to work with groups that represent people you want as followers. 5) Any Republican staffers who work to undercut Republican politicians should lose their jobs: It's inexcusable for Republican staffers to work overtime to try to destroy Republican politicians. Yet, we have staffers trashing other Republicans to the press, handing the press opposition research, and doing everything they can to help liberals in the press tear down conservatives. These staff losers should be treated like a case of the mange and permanently blackballed from politics. 6) The Republican Party shouldn't be involved in contentious primaries: The RNC, NRSC, NRCC and politicians in D.C. shouldn't be involved in competitive primaries. That's doubly so since they've shown such incredibly bad judgment in the past. After the Republican Party has backed disloyal leftists like Arlen Specter, Lincoln Chafee, Dede Scozzafava and Charlie Crist, it's only common sense to question whether the Republicans have any idea of what they're doing. 7) You don't lie to your base: If you're for a pathway to citizenship, Marco Rubio, you don't tell the world you're against it during your primary, criticize your opponent for supporting it, and then turn right around and lead the charge for amnesty. It's bad enough that politicians lie to anyone, but when they betray their own base on issues that matter (Read my lips, no new taxes), they DESERVE to get the Benedict Arnold treatment.
Trending Townhall Video
With Just 5 Weeks Before the Midterms, Polls Don't Look Good for Joe Biden
Sarah Arnold
Report Predicts Life-Alternating Transgender Surgeries Will Be Billion Dollar Industry
Sarah Arnold
Kamala Harris Claims Religion Has Nothing To Do With Abortion
Sarah Arnold
Vulnerable Virginia Democrat Claims 'I Don't Regret It At All' When It Comes to Praising Biden
Rebecca Downs
Joe Biden Is Caught In Yet Another Lie
Sarah Arnold
NYU Professor Fired After Students Complained His Class Was Too Difficult
Madeline Leesman