5 of the Most Hysterical Liberal Overreactions To Criticism of Obama 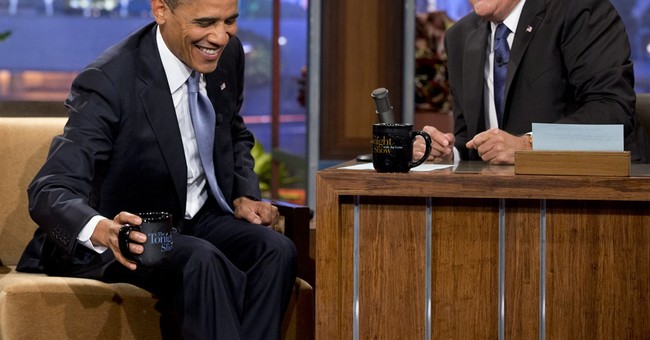 When George Bush was in office, liberals regularly compared him to Hitler, speculated that he was behind 9/11, fantasized about murdering him and generally talked about him like he was the Son of Satan. This was called "speaking the truth to power." Then Barack Obama came into office and ironically, dissent isn't so patriotic anymore. Suddenly these same people became angry, humorless scolds who believe that the President of United States is beyond criticism. Of course, the truth is that they haven't changed at all; they're just hypocrites. If you want to see how hypocritical and oversensitive to criticism they can be, here are five great examples.

1) Get the rodeo clown!: Rodeo clown Tuffy Gessling put on an Obama mask at the Missouri State Fair and asked the enthusiastic people in the crowd if they'd like to see “Obama run down by a bull.” Nothing racist was said, no threats were made, and of course, Obama wasn't in the ring. It was a harmless bit of mockery of the President that had been done previously to George H. W. Bush with no outcry. In this case, the Democratic governor and senator of the state condemned Gessling, he was banned for life from the Missouri State Fair, and the head of the Missouri NAACP called it a "hate crime" while asking for the Secret Service and NAACP to investigate.

2) Liberals demand that cartoonist be fired for mocking Obama's Stimulus: Sean Delonas did a cartoon for the New York Post that played on the story of Travis the chimp. The chimp was shot by police after going on a violent rampage. Delonas tied the shooting into the unpopularity of the stimulus bill. The cartoon shows Travis the chimp dead and one policeman saying to the other, "They'll have to find someone else to write the next stimulus bill." Obama wasn't mentioned in the cartoon and although he was widely associated with the stimulus bill, he didn't write it. Yet and still, the NAACP and Al Sharpton immediately claimed the cartoon was comparing Obama to a monkey and they demanded that the cartoonist be fired. The Post issued an apology "to those who were offended by the image," but didn't fire Delonas.

A conservative Marine who started an armed forces tea party Web page has been given an "other than honorable" discharge for misconduct after declaring on Facebook, "Screw Obama. I will not follow all orders from him."

In addition, he has expressed regret for his remark, at one point writing on Facebook, "The words that I used were tasteless and I could have articulated my point more clearly. I am man enough to admit my mistakes."

But today, Brig. Gen. Daniel Yoo, the commanding general for Marine Corps Recruit Depot San Diego, nevertheless upheld an earlier decision by an administrative separation board to give Stein the "other than honorable" discharge, according to a news release by the Marines.

"I love the Marine Corps, I love my job," Stein told The Associated Press today. "I wish it wouldn't have gone this way. I'm having a hard time seeing how 15 words on Facebook could have ruined my nine-year career."

4) The IRS persecutes the Tea Party: The Left has spewed an almost unlimited stream of hatred at the Tea Party for opposing Barack Obama, but under his administration, the IRS illegally targeted every Tea Party group that put in an application for tax exempt status. The IRS asked an inordinate number of questions, asked for data it had no right to request, and held up some applications for more than two years. To this day, testimony from agents indicates that the IRS is still defiantly targeting Tea Party groups despite the fact that officials from the agency have pled the 5th over the issue in front of Congress.

5) A teacher tells a student he can be arrested for criticizing Obama: In North Rowan High School in Spencer, N.C., social studies teacher Tanya Dixon-Neely got into an argument with a student, Hunter Rogers, because she felt he wasn't being sufficiently deferential to Barack Obama. She even told the student that he was risking arrest.

It begins with a classroom conversation about a recent news story detailing Republican presidential candidate Mitt Romney allegedly bullying a classmate in prep school. It turns into a heated, sometimes confrontational debate.

One student asks, “Didn’t Obama bully someone though?”

The teacher responds: “Not to my knowledge.”

In response to the Romney story, conservatives have recently been pointing to a passage in Obama’s book, “Dreams from My Father,” in which the president writes that while in grade school he shoved a little girl, the only other black student in his grade, after other students called him her boyfriend.

When the student tells the teacher that Obama admitted to bullying a girl in school, the teacher goes on the defensive.

“Stop, no, because there is no comparison,” she says. Romney, she says, is “running for president. Obama is the president.”

When the student says they’re both “just men,” the teacher continues to argue that Romney, as a candidate for president, is not to be afforded the same respect as the president.

The teacher tells the class Obama is “due the respect that every other president is due.”

“Listen, let me tell you something, you will not disrespect the president of the United States in this classroom,” she says.

The student replies that he’ll say what he wants.

“Not about him you won’t,” the teacher says.

Later in the conversation, the teacher tells the class it’s criminal to slander a president.

“Do you realize that people were arrested for saying things bad about Bush?” she says of former President Bush. “Do you realize you are not supposed to slander the president?”

The student responds by saying being arrested for talking badly about the president would violate the right to free speech.

“You would have to say some pretty f’d up crap about him to be arrested,” he says. “They cannot take away your right to have your opinion. ... They can’t take that away unless you threaten the president.”

Tanya Dixon-Neely was placed on paid suspension after a video of the conversation became public.