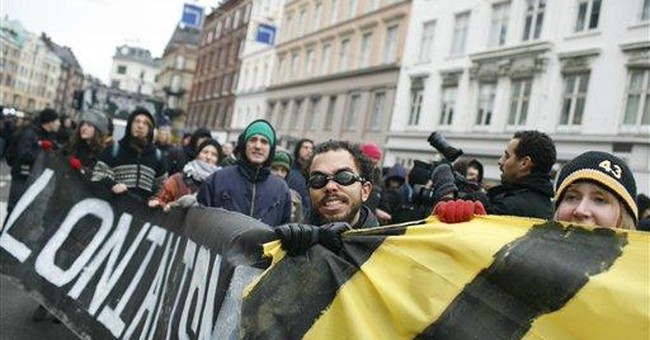 Have you ever seen one of those wild-eyed people with a sandwich board around his neck standing on the corner, screeching incoherently about how the end of the world is coming? Now, what if those people were insisting that you were really the crazy one? What if the newspapers agreed with them and the politicians wanted to pass taxes and spend hundreds of billions to implement their ideas? Sound too unbelievable to be true? Well, guess what? It's happening.

Global warming alarmists are regularly prophesying about doomsday scenarios -- except they're doing it in newspapers and from the stages of swanky resorts where they've flown in their private jets. Unlike the old school soothsayers, the Al Gore's of the world have figured out how to turn doom-mongering into a multi-billion dollar industry.

As you read these global warming predictions, visions, prophecies, fantasies, whatever you want to call them, ask yourself a question: if this is based on science, why do we have these huge differences in scenarios and dates? It's almost as if these people are all just pulling numbers out of their hats and putting them out there instead of basing their projections on any sort of real scientific evidence.

1) At the first Earth Day celebration, in 1969, environmentalist Nigel Calder warned, “The threat of a new ice age must now stand alongside nuclear war as a likely source of wholesale death and misery for mankind.”

2) The world has been chilling sharply for about twenty years. If present trends continue, the world will be about four degrees colder for the global mean temperature in 1990, but eleven degrees colder in the year 2000. This is about twice what it would take to put us into an ice age. -- Kenneth Watt, Ecologist

3) A high-priority government report warns of climate change that will lead to floods and starvation. ‘Leading climatologists’ speak of a ‘detrimental global climatic change,’ threatening ‘the stability of most nations.’ The scenario is eerily familiar although the document — never made public before — dates from 1974. But here’s the difference: it was written to respond to the threat of global cooling, not warming. And yes, it even mentions a ‘consensus’ among scientists. -- Maurizio Morabito

Whoops! Those were all about global cooling, not global warming. My mistake. You see, that was the fashionable doomsday story for alarmists to go on about back in the early seventies and it essentially worked the same way. Mankind is causing the earth to cool and scientists agree we're all going to die! Now, it's mankind is causing earth to warm and scientists agree we're all going to die! See? It's very easy to get those two confused. Now, back to your regularly scheduled doomsday prophecies:

4) According to His Royal Highness the Prince of Wales, we only have 96 months left to save the planet.

I'm impressed. 96 months. Not 95. Not 97. July 2017. Put it in your diary. Usually the warm-mongers stick to the same old drone that we only have 10 years left to save the planet. Nice round number. Former Vice President Al Gore said we only have 10 years left 3 1/2 years ago, which makes him technically more of a pessimist than the Prince of Wales. Al's betting Armageddon kicks in January 2016 -- unless he's just peddling glib generalities. -- Mark Steyn

Andrew Bolt: I ask you, Robyn, 100 metres [of sea level rises] in the next century...do you really think that?

Robyn Williams: It is possible, yes.

It is possible, no, actually.

If all ice on the earth melted, the level of the oceans would rise by 64 meters. Many coastal cities would be under water, and so would the Netherlands, a significant part of which lies below sea level. However, the Dutch and the rest of the planet may rest assured: this hypothetical catastrophe could not take place anytime within the next thousand years

6) The UK faces a "catastrophe" of floods, droughts and killer heatwaves if world leaders fail to agree to a deal on climate change, the prime minister has warned.

Gordon Brown said negotiators had 50 days to save the world from global warming and break the "impasse."

He told the Major Economies Forum in London, which brings together 17 of the world's biggest greenhouse gas-emitting countries, there was "no plan B". -- October 19, 2009

7) Meanwhile, the Director of the Goddard Institute, James Hansen, recently sent a letter to President Obama saying that Obama has “only four years left to save the earth” from “runaway warming.” He told the London Observer in February that “The trains carrying coal to power plants are death trains. Coal-fired power plants are factories of death.” Hansen maintains that recent warming has pushed the planet close to a “tipping point” for runaway warming. What recent warming? Three hundredths of a degree C over 30 years, with temperatures still declining, doesn’t seem worth ruining the world’s economies. -- April 20, 2009

8) While doing research 12 or 13 years ago, I met (James) Hansen, the scientist who in 1988 predicted the greenhouse effect before Congress. I went over to the window with him and looked out on Broadway in New York City and said, “If what you’re saying about the greenhouse effect is true, is anything going to look different down there in 20 years?” He looked for a while and was quiet and didn’t say anything for a couple seconds. Then he said, “Well, there will be more traffic.” I, of course, didn’t think he heard the question right. Then he explained, “The West Side Highway [which runs along the Hudson River] will be under water. And there will be tape across the windows across the street because of high winds. And the same birds won’t be there. The trees in the median strip will change.” Then he said, “There will be more police cars.” Why? “Well, you know what happens to crime when the heat goes up.”

And so far, over the last 10 years, we’ve had 10 of the hottest years on record.

Didn’t he also say that restaurants would have signs in their windows that read, “Water by request only.”

Under the greenhouse effect, extreme weather increases. Depending on where you are in terms of the hydrological cycle, you get more of whatever you’re prone to get. New York can get droughts, the droughts can get more severe and you’ll have signs in restaurants saying “Water by request only.”

When did he say this will happen?

9) A record loss of sea ice in the Arctic this summer has convinced scientists that the northern hemisphere may have crossed a critical threshold beyond which the climate may never recover. Scientists fear that the Arctic has now entered an irreversible phase of warming which will accelerate the loss of the polar sea ice that has helped to keep the climate stable for thousands of years.

They believe global warming is melting Arctic ice so rapidly that the region is beginning to absorb more heat from the sun, causing the ice to melt still further and so reinforcing a vicious cycle of melting and heating.

The greatest fear is that the Arctic has reached a "tipping point" beyond which nothing can reverse the continual loss of sea ice and with it the massive land glaciers of Greenland, which will raise sea levels dramatically. -- Friday, 16 September 2005

10) According to July 5, 1989, article in the Miami Herald, the then-director of the New York office of the United Nations Environment Program (UNEP), Noel Brown, warned of a “10-year window of opportunity to solve” global warming. According to the 1989 article, “A senior U.N. environmental official says entire nations could be wiped off the face of the Earth by rising sea levels if the global warming trend is not reversed by the year 2000. Coastal flooding and crop failures would create an exodus of ‘eco-refugees,’ threatening political chaos.”

So, wait a second: are we in the middle of an ice age or is the globe afire? Are we passing the point of no return now, is it happening in 2017, did it happen in 2005, or was the UN right that it happened in 1999? Why is there a difference? How did they come up with these numbers in the first place? Do the global warming alarmists, some of whom used to be global cooling alarmists, understand why they were wrong before? Maybe a little less uncritical acceptance of what these people are saying and a lot more skepticism might be in order at this point.