Four Colossal Holes in the Theory of Man-Made Global Warming 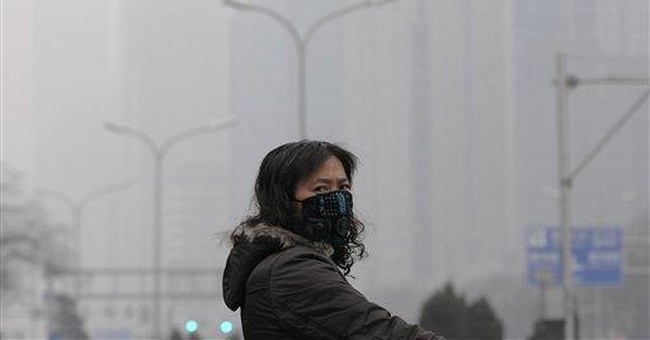 Repeating the words "scientific consensus" over and over and telling sad stories about polar bears does not qualify as "science." So, why is it that the people who insist that Man-made global warming is based on science, not politics, always get shaky and defensive when people want to actually talk about the reasoning behind it?

When was the last time you heard a scientist get hysterical when you asked him to explain Einstein's theory of relativity? If you ask a scientist why nothing can move faster than the speed of light, he doesn't tell you a terrible story about how koala bears will die if you don't believe the theory is right, does he? Scientists who are confident and in command of the facts don't need to distort data and duck basic questions about the assumptions that are behind scientific theories.

So, why is it that the people who insist that man-made global warming is occurring right now can't come up with coherent answers to many of the most basic problems with the ideas that undergird their theory?

Climate change has been around as long as the earth: If you listen to global warming alarmists, you'd think the climate had been a flat line until mankind started industrializing, after which the temperature rocketed straight upwards. However, the reality is far different, as even the New York Times has been willing to admit:

In October, Dr. (Don) Easterbrook made similar points at the geological society meeting in Philadelphia. He hotly disputed Mr. Gore's claim that "our civilization has never experienced any environmental shift remotely similar to this" threatened change.

Nonsense, Dr. Easterbrook told the crowded session. He flashed a slide that showed temperature trends for the past 15,000 years. It highlighted 10 large swings, including the medieval warm period. These shifts, he said, were up to "20 times greater than the warming in the past century."

So, the planet has had bigger temperature shifts than the one we're experiencing now. It has also been warmer than it is today:

So how can we, given our limited knowledge of how the climate works, attribute the extremely limited amount of warming we experienced over the last century to mankind? The honest answer is: We can't.

The earth was cooling from roughly 1940-1976: Despite the fact that widespread industrialization was occurring during that 30 year time period, temperatures dropped so much that there were claims we were going into a dangerous period of "global cooling." If global temperatures are tightly bound to man-made greenhouse gasses and those gasses were being rapidly introduced to the atmosphere, then the earth should have been warming, not cooling during that period. The obvious conclusion is that global temperatures are not nearly as closely associated with man-made greenhouse gasses as some people would have us believe.

So, if it's global warming, why isn't there any warming occurring now? One of the many revelations from Climategate is that behind-the-scenes, scientists who buy into man-made global warming are admitting what skeptics have been saying publicly for years now: The globe has been cooling since 1998. Again, if global warming has its bootlaces hitched to the amount of man-made greenhouse gasses that are being produced and those numbers are increasing, why hasn't the temperature gone up as well? There's a simple answer: Man-made greenhouse gasses are not a decisive factor in raising or lowering the temperature of the earth.

Climate models can't accurately project the weather 100 years in the future: The truth is that we don't fully understand how our planet's climate works and thus, our climate models don't work very well. Since the climate models can't explain the climate over the last 25 years and they can't explain the leveling off of temperature since 1998, why would anyone believe they can predict conditions in 100 years? As computer programmers say, "garbage in, garbage out."

The Doomsday predictions from global warming alarmists are absolutely meaningless because they're based on climate models that don't work very well in the first place. As Dennis Avery, co-author of Unstoppable Global Warming: Every 1500 Years has said:

I think they pull their predictions out of their hats and I don't think they have any validity whatsoever.

What the global warming alarmists are asking of people is no small thing. They want us to spend trillions of dollars, dramatically impact our economies, and change the way people across the world live for the worse. Those are not trivial changes and simply having scientists -- who've been put under enormous political pressure and make a living off global warming grants – say, "Trust us, it's real," isn't going to cut it for proof. If global warming alarmists can't even deliver plausible answers to the most obvious problems with their theory, then no one should take them seriously.