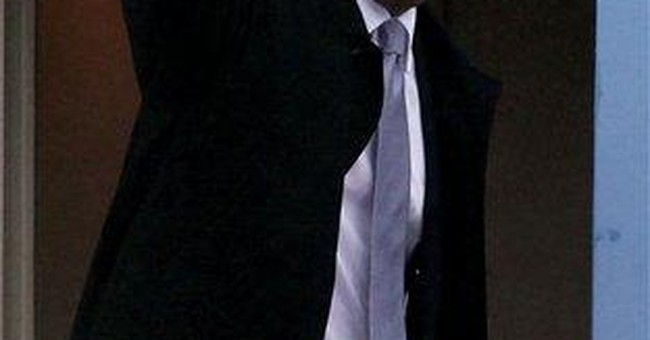 "You will find that I am kind. Unlike the cruel Leonidas, who demanded that you stand...I require only that you kneel." -- King Xerxes, 300

Liberalism is an extraordinarily deceptive, ruinous and cruel ideology. That's because liberalism comes, arms wide open, whispering sweet words of compassion and pity, even as it forcefully slams down a boot upon the neck of people it's "helping." It's bad enough to see people's lives ruined by those who make no pretense about their intentions, but to see human beings destroyed by those who claim to have only their best interests at heart...well, let's just say it's a hell of a thing.

What liberalism does to minorities: Liberalism falsely convinces minorities in America that they are widely hated and despised for their skin color. How terrible it must be to spend your days seeing racial slights that don't exist, feeling despised by people who don't give you a second thought, and expecting that you will be treated unfairly by people, most of whom think no more of your skin color than they do the color of the carpet they're standing on.

Believing these lies leads to a sense of victimhood that liberalism offers to "fix" with more destructive solutions like Affirmative Action. How many white Americans have doubted the achievement of a black American because of Affirmative Action? How many black Americans have doubted their own worthiness because they thought they may have been given a helping hand because of their race? How many black college students who would have graduated with honors at UNC-Chapel Hill flunked out of Harvard because Affirmative Action got them into a college that was over their head? In the wildest dreams of the Ku Klux Klan, they could have never come up with an ideology as deviously destructive to minorities in America as liberalism.

What liberalism does to children: One of the great ironies of modern life is the constant liberal refrain of "do it for the children." That's true, not only because liberalism is directly responsible for the death of more than 40 million children via abortion, but because liberal policies have descended like a plague of locusts upon the inheritance that America's sons and daughters would have otherwise received. Generations after everyone who went to Woodstock is in the ground, Americans will still be paying off their spending. What better thing could we do for the children than to safeguard the country we grew up in so that they'll have an opportunity to live the American dream, too?

What liberalism does to Africa: Liberalism's smothering paternalism has arguably done considerably more damage to Africa than European colonialism. "The Western world has given Africa 'about a trillion dollars in aid in the past 50 years' and yet as a whole, the continent could be fairly said to have gone backwards over the last 10-15 years." Obviously our aid is doing little for Africa, but we can't stop, even if it would be better for them to learn to stand on their own two feet, because liberalism says it’s better to ruin millions of lives than to risk making liberals feel bad.

If only liberalism similarly prioritized the lives of African children over those of song birds. In another great irony, it's conservatives who argue that DDT should be used in Africa to kill mosquitoes and wipe out malaria, while liberals are willing to watch millions die because they're afraid that to do otherwise -- might put a few birds at risk.

What liberalism has done to the American family: Oh, the intentions are always good...so liberalism says. They just don't want anyone to feel bad or be judged negatively. They want everyone to have a good time and they believe the government should be there to pick up the pieces if things don't go well. So, we get...

Welfare checks. Gay marriage. No fault divorce. The sexual revolution. Attacks on Christianity. Lauding hedonism and single mothers in Hollywood. "A woman needs a man like a fish needs a bicycle."

But, when inevitably divorce rates skyrocket, our prisons fill up with children who never had fathers living in the home, and our society starts to fray around the edges, no one wants to admit that liberalism is at the heart of the entire problem.

What liberalism does to the poor: What mother dreams that her child will grow up to be on food stamps? What decent father wants to see his son eating free breakfast at school? How can you care about a person and want to see him living in a government housing project, collecting welfare, and nursing a grudge against the people in our society who have succeeded in life, instead of trying to become a success himself?

Liberalism says its adherents should pat themselves on the back for their compassion because they're making it possible for people to live that way. How many men's pride have they stolen with that "compassion?" How many lives has that "compassion" helped mire in misery? How many people, who could have made good lives for themselves, in the end, became dependent on the government and chose lives of mediocrity? If someone views that as "compassion," then his moral compass is shattered.