Before We Carve Barack Obama's Face on Mt. Rushmore 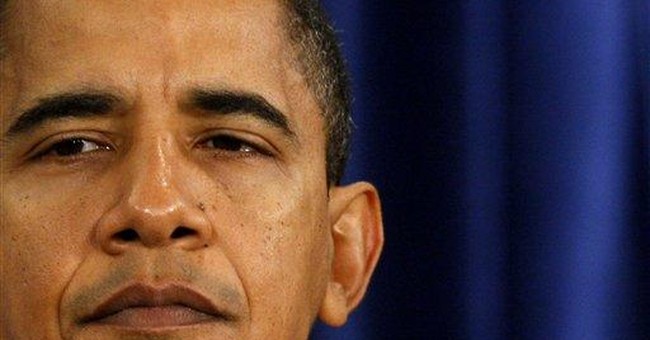 In the entire history of our country, I'm not sure there has ever been a presidential honeymoon period as tender and loving as the one that Barack Obama is experiencing today.

In Perry County, Alabama they have already voted to create a paid holiday called "Barack Obama Day." That's an honor not bestowed on "lesser Presidents" like George Washington, Abraham Lincoln, Ronald Reagan, and Teddy Roosevelt -- whose accomplishments, though great, surely will not eclipse those of "President Government" after his time in office. But, that's just a county holiday. Topeka activist Sonny Scroggins, with the support of the NAACP, is actually working on a national holiday for Obama.

Given the way that our mainstream media is fawning over Barack Obama, we shouldn't expect much resistance to the idea of creating a holiday to honor a man whose only real accomplishment so far is winning elections.

For example, MSNBC anchor Alex Witt was so taken with Obama that she was shocked that the mere fact that he was elected didn't end terrorism worldwide,

..."There are many who suggested that with the outgoing Bush administration and the incoming Obama administration there would be something of a lull in terrorism attacks. There had been such a global outpouring of affection, respect, hope, with the new administration coming in, that precisely these kinds of attacks, it was thought -- at least hoped -- would be dampered down."

Then there's Chris Matthews who said it is his "job" to make "this new presidency work," a sentiment that seems to be widely shared in the media, even if most of them aren't foolish enough to share that view of their "job description" with their audience.

That's part of the reason why Obama's hard core supporters, which would include most members of the mainstream media, haven't had much to say about the fact that he has already started rapidly backing off his campaign promises on everything from the windfall profits tax to the Bush tax cuts, to a rapid withdrawal from Iraq. Of course, many of Obama's supporters were so ignorant of what he stands for that they probably have no idea he's breaking his promises in the first place.

Heck, the Presidential honeymoon has gotten so gushy that even a lot of conservatives have been writing mash notes to Obama of late because some of his cabinet picks aren't to the left of Michael Moore. Of course, the real question about his cabinet at this point is what's Dennis Kucinich doing these days? After all, since Obama seems to be trying to bring everybody who ran against him into his administration, he might as well create a Department of Peace for Kucinich to run, put Chris Dodd in charge of HUD, and hire John Edwards to be Bill Clinton's wingman at sorority parties. Speaking of the Clintons, with all the Clinton staffers Obama is hiring, you have to wonder how many of these people will ultimately be loyal to Hopey McChange and how many of them will secretly support Slick Willie and the Wicked Witch of New York? The first time something goes wrong overseas and either the Secretary of State or the President has to take the blame, the leaks will tell you where the staffers' loyalties really lie.

But, that brings us back to the crux of the matter: Barack Obama hasn't actually started governing yet. We have a rookie senator who's never made a tough decision in his adult life getting ready to enter the White House in what may be the toughest time to lead the country since Jimmy Carter was wrapping the country around a telephone poll.

The economy is now officially in the toilet and is likely to remain so for at least a year or two -- and the bailouts? They've just started and they're already unpopular. How is that corporate welfare on steroids going to look as more and more companies come to Congress with their begging bowls? How about when we're running trillion dollar deficits? What happens after the unemployment rate cracks 8%, large numbers of Americans are really worried about paying their bills, and they're reading about the latest round of hand-outs to companies? How can Obama possibly fulfill his campaign promises, many of which are staggeringly expensive, when the country is in a recession and the government is running record deficits? It's not a pretty picture.

We're also still in the midst of a global war on terror. In Iraq we're winning, but Obama has to finish the job or be "the President who lost the war." In Afghanistan, things aren't going as well, but Obama has promised to get us back on the right track. Plus, we can't forget that Al-Qaeda is looking to hit the homeland, Iran getting perilously close to a nuclear weapon, our ongoing negotiations to disarm North Korea -- and Obama's squawking, bratty liberal base that will demand we forego necessary security measures, get out of Iraq and Afghanistan ASAP, and oppose military action against foes of the United States -- while demanding we send the troops to places where no American interests are at stake.

Speaking of Obama's base, they may be quiet now, but they certainly will not remain so. They're looking at the size of the Democratic majority in Congress and expecting Obama to dramatically tilt the country to the left. Woe be unto him if he doesn't meet those expectations. Meanwhile, the Democrats who have to run in red states or districts will urge Obama to remain in the center, lest the party take a beating in 2010. Then there are the competing Democratic interest groups and the people who projected their own hopes and dreams onto Obama and now expect him to pay up. Remember the Obama supporter who famously said she was backing him because,

That's the problem with promising to be all things to all people in order to get elected: if you actually win that way, they expect you to pay up.

On January 20, 2009 -- Barack Obama is going to face an extraordinarily difficult situation that would test the most capable of Presidents. It's not quite a "I wouldn't wish it on my worst enemy" spot, but it's going to be tougher than a Waffle House steak, particularly so for Obama because you can't vote "present" in the White House.

So, before we carve Barack Obama's face right there on Mt. Rushmore beside of Abe Lincoln, perhaps we should wait to see if he's as good at tackling this country's very real problems as he is at raising money, reading speeches off a teleprompter, and chucking his former friends and allies under the bus.