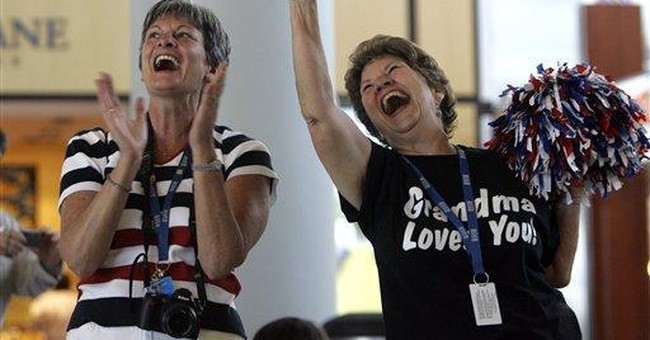 Correcting the myths created and propagated by the liberals in the mainstream media could be an all day, every day job. In fact, there are organizations like the Media Research Center that do just that.

However, the mainstream media is so biased to the Left and churns out so many inaccuracies each day, that sometimes even truly enormous myths manage to slip through the cracks and become accepted as fact. Last week, I covered five of those big lies. This week, I'm going to take on five more left-wing fantasies that you've undoubtedly heard repeated over and over again ad nauseam.

No weapons of mass destruction were found in Iraq: This one is such an article of faith on the Left that they actually mock people for saying otherwise, but the reality is far different from what they would have you believe.

Roughly two years ago, Rick Santorum revealed that over 500 WMDs had been found in Iraq. Since then, more have been found although it's difficult to get an exact count. Despite the fact that the WMDs our troops located were old, as Santorum explained, the finds were very significant,

"One of the things that we asserted was that (Hussein) had not destroyed his stockpiles of weapons from the previous war. We sent in weapons inspectors, as people will recall, not only to look at whether he had current weapons programs in place, but to determine whether he had destroyed the weapons he said he had destroyed. It is very clear that he did not destroy those weapons and that those weapons would have been available and unfortunately still are available to...terrorist organizations that could use them against us or other countries around the world."

Of course, you can fairly argue that those were old WMDs that varied in their level of effectiveness because of their age, but that's far different from saying that Saddam had no weapons of mass destruction when we invaded.

Tax cuts lead to revenue drops for the federal government: Liberals regularly claim that revenue from tax cuts must be "made up" somehow, which ignores the fact that government revenue usually goes up after tax cuts.

That was certainly the case after the Bush, Kennedy, and Reagan tax cuts, which makes perfect sense if you understand the Laffer Curve.

There are lots of intelligent arguments that you can make about taxes. You can argue that tax raises may also increase revenue, that tax cuts may reduce the size of the future increase in revenue the government will receive, or that we could eventually cut taxes so dramatically that they would no longer yield revenue increases, but clearly the last few major tax cuts we've had have produced increases in federal revenue, not decreases.

After General Eric Shinseki said we would need 500,000 troops to handle post-war Iraq, he was fired: Whether Shinseki was right about the number of troops we needed is debatable, given that we obviously didn't have enough boots-on-the-ground in the immediate aftermath of the war -- but are winning today with a far smaller number of soldiers than Shinseki said we should have -- but in any case, the United States Department Of Defense has made it absolutely clear that Shinseki wasn't fired, retired, or removed for his remarks,

Gen. Shinseki was appointed to a four-year term as chief of staff of the Army and served his full term. When Gen. Shinseki made his oft-cited statement about troop levels in February 2003 during a congressional hearing, it was already well-known that his term would end six months later. Serving longer would have been extraordinary. The only two men to serve longer than four years in the entire 103-year history of the position have been Gen. Douglas MacArthur and Gen. George Marshall.

George Bush stole the 2004 election by cheating in Ohio: This conspiracy theory doesn't inspire as many tantrums as the Florida controversy in 2000, but there are liberals galore who will tell you that Kerry really won Ohio in 2004 and thus, the election.

The problem with this idea is that the margin in Ohio was so large that it practically precluded the possibility of fraud making the difference. The initial margin was 118,443 votes, which was more than 220 times the difference between Bush and Gore in Florida. If every state -- that was won by even half that many votes -- became controversial, it's hard to see how we could ever make it through another election without months of charges and counter-charges to go along with never-ending legal challenges.

Moreover, as Michael O'Grady, the legal counsel to the Ohio Democratic Party once said, given the size of Bush's win, in order to believe the election in Ohio was stolen, you'd have to think, "that the entire Republican Party is conspiratorial and the entire Democratic Party is as dumb as rocks."

Since at least the first half of that statement is completely untrue, Ohio obviously wasn't stolen.

Oil companies gouge consumers to make outsized profits: Unsurprisingly, given the outrageously high cost of gas and the Left's penchant for pointing the fickle finger of blame at big corporations, we've heard a lot about how big oil is gouging consumers.

However, when you take a look at the actual numbers in California, for example, you find that the "Distribution Costs, Marketing Costs and Profits" for the oil companies make up only 8 cents per gallon of gas.

That doesn't sound like gouging, does it? But if you believe it does, what would you say about the 70 cents per gallon in taxes that's paid by California consumers? Additionally, as Karl Rove has pointed out,

Sure, these oil companies are huge and therefore, even an 8.3% profit adds up to billions of dollars, but when you look at the relatively small percentage that they're putting in their pockets as compared to the humongous share that the government is raking in, it's pretty clear that it's the government, not the oil companies, that is gouging consumers.