John Hanlon
|
Posted: Feb 17, 2018 9:00 AM
Share   Tweet
The opinions expressed by columnists are their own and do not necessarily represent the views of Townhall.com. 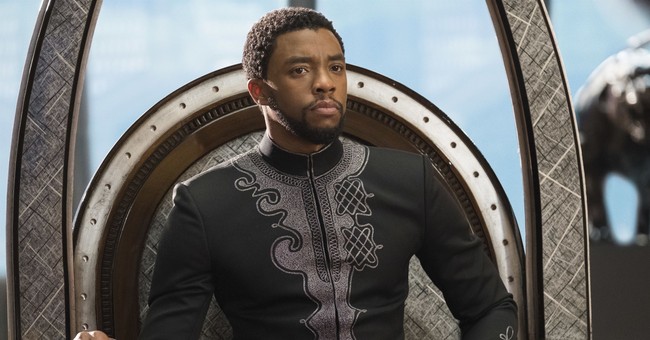 “Just because something works doesn’t mean that it can’t be improved.” So states one of the main characters in the new superhero drama Black Panther. The same could be said about the Marvel cinematic universe. Many of the movies in that universe work commendably but this new addition isn’t complacent in that comic book universe. This is a movie that stands on its own.

Chadwick Boseman was introduced as T’Challa in Captain America: Civil War. After the death of his father, T’Challa inherited his father’s throne as the Black Panther — an iconic leader in the African nation of Wakanda.

Early on in this new film, audiences are reminded of these events in the lead-up to the ceremony celebrating T’Challa’s new role as Black Panther. That ceremony highlights one of the film’s greatest strengths: its uniqueness. Different African tribes are represented in a beautiful tapestry of community that feels unlike so much of what Marvel has previously offered. This story celebrates these disparate cultures, showcasing the beauty that Wakanda offers.

In this movie, Coogler reunites with Michael B. Jordan (who starred in Creed and also starred in Coogler’s underrated drama Fruitvale Station). Jordan plays Erik Killmonger, a frustrated young man who grew up in a poor community and realized from an early age how unjust the world could be.

Jordan’s performance is commanding but it’s also personal, keeping the character’s motivations clear even when he acts despicably. He stands out as one of Marvel’s best villains not for the damage he causes but for the complexity of his character. Even as he lashes out, audiences can understand his frustrations with the world.

A conflict in Wakanda eventually leads to a power struggle between T’Challa and Killmonger and tribes are forced to take sides. The struggle is recognizable and deep, forcing characters to choose between their loyalty to their nation and their relationships with their allies.

Black Panther is undoubtedly an action film with great car chase sequences and dramatic fight scenes. But it offers something more than the sum of those parts. The drama offers a sweeping story about the pursuit of power and the weight of regret. It strives to be as enlightening as it is entertaining and it pulls off that feat.

The story is aided greatly by the large cast that do strong work with their supporting roles. The Walking Dead’s Danai Gurira is absolutely superb as the loyalty-driven Okoye with Letitia Wright providing great energy (and sometimes comic relief) as T’Challa’s sister, Shuri. The underrated Angela Bassett also provides a strong anchor to the film as T’Challa’s mother.

The great cast also includes Lupita Nyong’o, Daniel Kaluuya, and Martin Freeman. Even with limited airtime, each of these characters are given their opportunity to make their mark in this sprawling feature.

Written by Coogler and Joe Robert Cole (and based on the comics by Stan Lee and Jack Kirby), this is the rare superhero movie that can speak to audiences of multiple genres. It’s exciting and flashy but most powerfully, it’s an important movie that celebrates culture in a way that few films dare to. What Coogler has crafted here is a unique type of superhero movie and audiences are all the better for it.