John Hanlon
|
Posted: Feb 03, 2018 12:01 AM
Share   Tweet
The opinions expressed by columnists are their own and do not necessarily represent the views of Townhall.com. 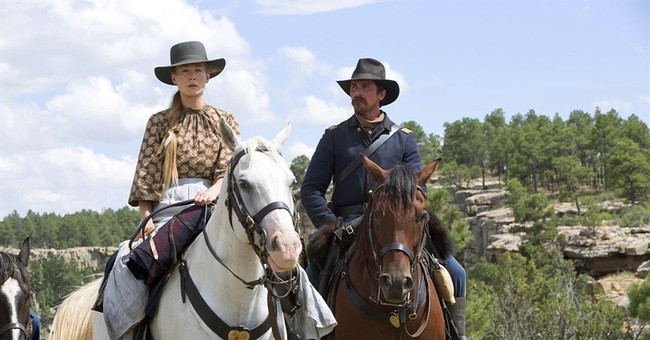 The new Western Hostiles begins with an unshakably violent event. A small family is attacked and brutalized by a group of Native Americans. There’s no justification for the violence. Only bloodshed.

There’s no moral ambiguity in that sequence but as the film tells a larger story, moral ambivalence takes center stage as the story explores the omnipresence of violence in the Old West.

Set in 1896, the feature stars Oscar winner Christian Bale as Captain Joseph J. Blocker. Blocker is a weary warrior who has seen his share of violence and engaged in his share of battles. He’s seen friends die at the hands of Native Americans and believes he knows exactly what the enemy looks like. His latest assignment from the federal government puts him in a difficult position.

He’s tasked with escorting Chief Yellow Hawk (Wes Studi), a Native American warrior, and his family back home. The chief is dying and the President of the United States wants him to return back to Montana to die in peace. As the journey begins, Blocker finds no comfort or peace in his mission (the man he’s tasked with protecting looks like so many of the men he’s killed) but as their path from New Mexico continues, the American Captain begins to find understanding with the Native American chief.

Written by Scott Cooper and adapted from the manuscript by Donald E. Stewart, the plot places the two men close to one another as they face the dangerous world around them.

Bale, who was a perfect choice for the lead role, brings an emotional restraint to his character that subtly hints at his background. Blocker doesn’t speak often about his past and the brutality he’s faced or utilized but the audience can see his weariness and pain from his facial expressions and by the way he never flinches from violence.

The deep themes are explored richly with a supporting cast that emphasizes different perspectives.  The physically-exhausted Yellow Hawk has seen many battles as well and shares many similarities with Blocker but doesn’t need to say them aloud. He also knows the weaknesses of Blocker’s bigotry and tells Blocker about the disparity between the different Native American tribes. He knows which tribes are simply fighting in defense and which ones need no justification for bloodshed.

There’s also a Master Sergeant (Rory Cohrane), who has grown accustomed to a lifestyle of fighting and even says he’s gotten used to murder. He tells a young lieutenant (Jesse Plemons) about how natural violence has become for him and the lieutenant says that he fears the idea of feeling the same way.

In two hours and fourteen minutes, Cooper — who also directed the feature — has time to reveal all of these different personalities. Each of them add to the murkiness of the debate of right versus wrong. The first scene is an obvious display of brutality but by the feature’s closing moments, Cooper has revealed layer upon layer of grey, showing both audiences and the characters how complicated the Old West truly could be.

Unlike other Westerns, this feature never shies away from the emotional pain that people suffered under such brutal conditions. Actress Rosamund Pike does incredible understated work as a widow who watches her family get slaughtered in front of her. Her heartbreak is not only obvious during the shooting but it’s also showcased in a painfully realistic sequence showing her digging graves for her loved ones.

There are a few characters (members of Little Hawk’s family come to mind) who aren’t given the opportunity to grow here unfortunately. The film is so great at revealing differing personalities and the moral ambiguities of the Old West so it’s disappointing that not all of the characters are given similar opportunities.

As a character study of a few main characters though, Hostiles is remarkably thoughtful and morally provocative.