John Hanlon
|
Posted: Sep 01, 2016 12:01 AM
Share   Tweet
The opinions expressed by columnists are their own and do not necessarily represent the views of Townhall.com. 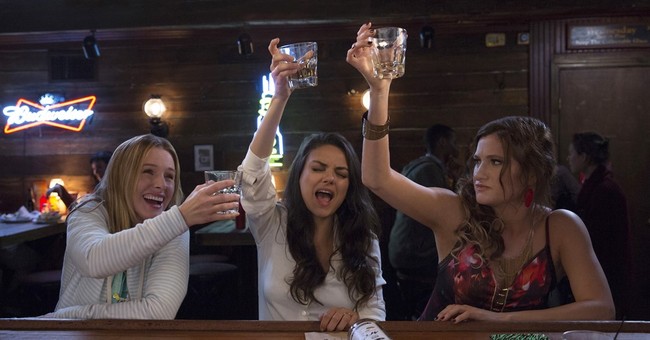 Earlier this summer, an Oscar-nominated actress starred in a film about hunting ghosts. The film was highly-anticipated and earned slightly more than 100 million at the domestic box office. It was considered a huge success. Five weeks later, another highly-anticipated movie starring an Oscar-nominated actress and featuring a story about hunting ghosts opened and earned slightly over $100 million. It was considered a major failure.

The former film was The Conjuring 2, a sequel that starred Oscar nominee Vera Farmiga as a religious paranormal investigator who worked alongside her husband. The latter film was Ghostbusters, the 2016 female-led reboot that starred Oscar nominee Melissa McCarthy alongside Kristen Wiig, Kate McKinnon and Leslie Jones. Both movies did indeed earn slightly more than 100 million domestically but only The Conjuring 2 was considered a big hit.

The reasoning behind this logic is very simple. According to BoxOfficeMojo.com, The Conjuring 2 reportedly cost $40 million to make while Ghostbusters cost approximately $144 million. Both films did respectively overseas with the former earning a strong $212 million and the latter earning $92 million. The difference remains that The Conjuring 2 was considered a success because of its gross versus its budget while the latter is reportedly heading for a $70 million loss by the studio.

One of the biggest lessons at the box office this summer is that being fiscally conservative and economically responsible can lead to amazing success.

Ironically, the genre that best represents this principle is the horror one. Many horror movies are made with meager budgets but go on to great success and that was on display throughout this summer. Each month, another horror movie was quickly turning a profit at a cineplex near you. In June, both The Conjuring 2 and shark-infested The Shallows became success stories. In July, the scary Lights Out cost less than 5 million but opened with four times that amount. A month later, Don’t Breathe opened to $26 million on a budget of less than $10 million.

Horror wasn’t the only genre this concept succeeded in. In comedy, Ghostbusters was considered a letdown but movies like Central Intelligence, Bad Moms, and Sausage Party were considered major hits. These films didn’t rely on their stars, their big budgets or their special effects.  They found success with limited budgets and low expectations (the expectations for these movies were much lower than the expectations for the long-awaited but undeniably controversial Ghostbusters reboot).

The same idea also applied to family films like The Secret Life of Pets (although that film did cost a somewhat pricey  $75 million to make), romantic movies like Me Before You and thrillers like The Purge: Election Year.

Compare these success stories to the stories of Alice through the Looking Glass, The BFG and Independence Day: Resurgence. Alice was the sequel to the 2010 Johnny Depp movie Alice in Wonderland, which earned more than a billion dollars worldwide. The BFG was a Steven Spielberg movie that was compared to his earlier family-friendly films. Independence Day: Resurgence was the sequel to the highest grossing movie of 1996.

Each of these high-profile films cost nearly $200 million to make. While each of them earned more than their production budgets overseas, all of them were considered massive disappointments considering both the high expectations for them and the money that cost to publicize these movies (which isn’t included in the production budget).

There were, of course, exceptions to this rule. Captain America: Civil War was a high-profile and high-budgeted sequel that cost $250 million to make and earned more than a billion dollars worldwide.  Suicide Squad cost nearly $200 million but has earned more than $600 million worldwide. These films are both considered success stories. Additionally, some low-budgeted horror films did fail to find an audience.

However, the great lesson of this summer is that being fiscally conservative and economically responsible can lead to tremendous success stories Even in Hollywood, the lesson seems pretty clear.

Click here for a full list of the winners and losers at the box office this summer.