John Hanlon
|
Posted: Aug 25, 2016 12:01 AM
Share   Tweet
The opinions expressed by columnists are their own and do not necessarily represent the views of Townhall.com. 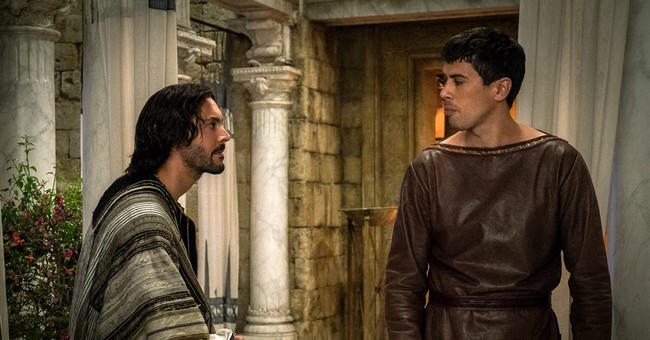 Ben-Hur, the latest Hollywood feature to embrace religion, had a difficult opening weekend at the box office. The film reportedly cost 100 million dollars to make and earned less than 12 million in its first weekend. Those are some difficult numbers to overcome. Because of that, some in Hollywood might be tempted to write off Christian films.

That temptation should be avoided at all costs.

In fact, audiences for religious features are there and have made success stories out of low-budgeted movies like Miracles from Heaven and Risen this year. (Click here to learn more about these religious success stories.)

However, there are five lessons that can be gleaned fromBen-Hur’sbox office issues.

1.)The lower the budget, the greater the chance for success: A film with a production budget of 100 million dollars is a risky venture. A religious film with that budget is a lot riskier.

In the past few years, movies like Noah and Exodus: Gods and Kings were big-budget religious movies. Featuring A-list stars and helmed by well-known directors, these features faced criticism for their reliance on big budget effects over religious values. Both films were profitable overseas but neither of them was considered the kind of success story the studios were hoping for.

The best-known religious success stories are films likeGod’s Not Dead,Miracles from HeavenandWar Room— dramas that were made for low budgets and quickly became profitable. EvenThe Passion of the Christ, which broke box office records in 2014, was reportedly made on a budget of only 30 million dollars.

2.)Contemporary stories oftentimes resonate more: Some of the best religious films coming out today focus on contemporary stories. Either fictional or reality-based, these movies often show how religious messages can help people through their everyday lives.

A few prime examples of this areSoul Surfer(2011), Heaven is for Real(2014) andMiracles from Heaven(2016). Each of these features told true stories that made headlines in recent years. Filmmakers brought the stories to the big screen and found audiences for each of them. According to BoxOfficeMojo.com, the respective budgets of these three movies were 18 million,12 million and 13 millionand their respective domestic grosses were 43 million, 91 million and 61 million.

3.)Avoid remakes of beloved films:  Ben-Hur, the epic 1959 masterpiece, is one of the most beloveddramas of all time. It was beloved by audiences and went on to win 11 Academy Awards, a record that has been tied twice in recent years (withTitanicin 1997 andLord of the Rings: The Return of theKing in 2003) but never surpassed.

As Variety’s Brent Lang notes in an article about whyBen-Hurflopped, audiences have been looking for something fresh this summer. He writes, “After a summer where franchises and reboots have suffered diminishing returns, audiences in recent weeks have been embracing anything that seems new and original.” The 2016 Ben-Hur, which is actually a remake of a remake, just didn’t appeal to an audience interested in something fresh and unique.

4.)Family-friendly religious movies oftentimes bring in larger audiences: One common aspect of many of the most recent group of religious success stories is that parents and grandparents can bring their families to these movies.

Sherwood Pictures, the film-making company backed by a Georgian Baptist Church, offers a great example of success. That studio released low-budget hits likeFacing the Giants,Fireproof and Courageous– all family-friendly features that went on to great success. As Hollywood Reporter journalist Paul Bond wrote, “While Iron Man 2 and Thor earned three times their production budgets, Giants was made for $100,000 and took in $10.2 million domestically, 102 times its budget.” It clearly helps that these films can be enjoyed by all members of a family.

Ben-Hur, for all of its great qualities, isn’t exactly family-friendly. Its most noteworthy scene is a chariot race featuring a lot of death and destruction, meaning that people are less inclined to bring their families to go see it.

5.)Buzz is important: Buzz has been a critical component of movies like this. When audiences see a movie they like, they tell their friends about it — bringing more and more people in to the theater. This concept was extremely evident withWar Room— a film that according to BoxOfficeMojo.com opened with a solid 11 million dollars (on a three million dollar budget) but went on to make approximately six times that much domestically.

Ben-Hur actually got some solid reviews from HotAir.com’s Ed Morrissey,Glenn Beck and audiences in general. According to Deadline.com, the two studios that co-released this film “sold this to the faith-based and the fruits of their labors can be seen in Ben-Hur’s A- CinemaScore, the same grade that Risen received.”

The problem is though that by the time buzz started to grow for the film in religious and conservative circles, the movie was already suffering at the box office.

As TheAtlantic.com points out, movies like “Heaven Is for Real,War Room,Miracles from Heaven,God’s Not Dead, andRisen… opened small and added theaters as popularity grew. Because of its huge budget, Ben-Hur couldn’t do that—it needed to open strong likeThe Passion of the Christ did.” The film didn't open well, meaning that the film's momentum will likely be stalled.
***

It’s unfortunate that Ben-Hur(it’s actually a very good film) had such a tough weekend and there’s still a chance it could do solid business overseas but in the meantime, Hollywood shouldn’t slow down on making religious films. There’s an audience out there. It just needs to be approached differently.