HBO takes on President Johnson’s Bullying in 'All the Way'

John Hanlon
|
Posted: May 22, 2016 12:01 AM
Share   Tweet
The opinions expressed by columnists are their own and do not necessarily represent the views of Townhall.com. 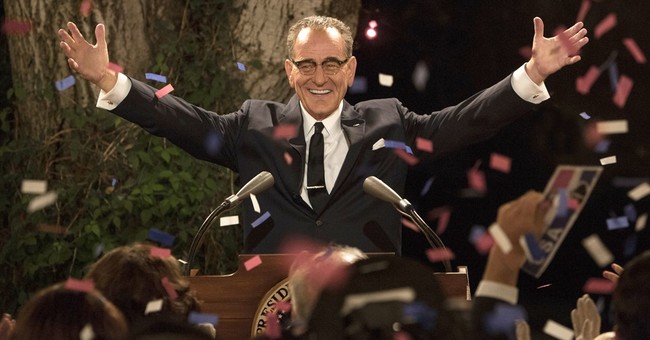 The new HBO film All the Way, which premiered last night, attempted to capture the power and personality of President Lyndon B. Johnson by focusing on two important periods of his presidency. The first period is right after then-Vice President Johnson is elevated to the presidency after Kennedy's assassination and the second period includes the months leading up to the 1964 election, when Johnson faced renewed criticism from the Civil Rights community.

Adapted from the play by Robert Schenkkan (who wrote the film’s screenplay) and starring Bryan Cranston (who played the lead role on Broadway), the feature is effective in dramatizing Johnson’s domineering personality (and his ability to cajole votes) but lacks the depth to really delve into Johnson’s presidency.

Cranston, who really loses himself in the portrayal of this distinct character, presents himself as a confident, powerful and towering figure who quickly realizes the potential of his presidency. “I’m gonna out-Lincoln Lincoln,” he says later quoting former Speaker Sam Rayburn and saying that “Any jackass can kick a barn down but it takes a carpenter to build one.”

The feature's first hour shows Johnson fighting for the 1964 Civil Rights bill with the support of liberal Senator Hubert Humphrey (Bradley Whitford) and civil rights leader Martin Luther King Jr. (Anthony Mackie). This section plays off like a rushed version of the 2012 drama Lincoln, where the battle is being fought in the halls of power as the president uses a variety of tactics to secure the votes he needs. The second half of the feature showcases the fights leading up to the 1964 election.

Schenkkan’s play took on a similar structure and it’s interesting to see it play out on the big screen. The format really reveals how President Johnson was able to turn on his former allies to get what he wanted. He was a visionary in some ways and a ruthless politician in others. “I love you more than my own Daddy,” he tells Georgia Sen. Richard Russell (Frank Langella), before adding “but if you get in my way, I’ll crush you.”

It’s the Southern Democrats who receive the blunt of his anger early on but in the feature’s second half, it’s often the civil right leaders and Humphrey himself who face much of his antipathy. During the 1964 convention, the Mississippi Freedom Democratic Party fought to be seated and the president — who was then much more concerned with winning the election than in fairness — had to intervene.

In one tremendously-powerful sequence, Johnson seemingly loses his humanity when he hears the painful tale of a black woman’s abuse at the hands of the police and instead of empathizing with her, he grabs the spotlight away from her so he can maintain control of the narrative leading up to the convention.

All the Way falls short though in the way it seemingly minimizes some the other major events in the early part of Johnson’s administration. Vietnam is mentioned here — only superficially though — but it doesn’t feel like a natural part of the story. It’s like the writers felt like they needed to mention the ongoing war but didn’t feel the need to delve into it.

It’s also hard to leave this film with a deeper understanding of the 36th president. Johnson clearly was a forward thinker, knowing that the Civil Rights Act was a necessary positive step for this nation but the film never really explores the depth of this perspective on this issue. As a Texas Democrat, Johnson defied many moderate members of his own party to align himself with the Republican Party to pass the Civil Rights Act but there are only a few scenes here suggesting why he was so courageous to do so.

What All the Way does so effectively though is bring Johnson’s political character to life. Here was a man who was willing to bully, cajole and manipulate his closest allies to get his legislation passed. He was even willing to turn his back on his forgiving wife Lady Bird (Melissa Leo) when he thought she stood in his way. When the film ends, Johnson isn’t a happy man despite the victory that ends the picture.

He’s a tragic Shakespearean one who still hasn’t yet come to grips with the battle that would defy much of the rest of his presidency — the growing war in Vietnam.

After the success of All the Way, here’s a list of 5 U.S presidents HBO should take on in their next series of biopics.