Review: The Force is Awakened in Star Wars: Episode VII 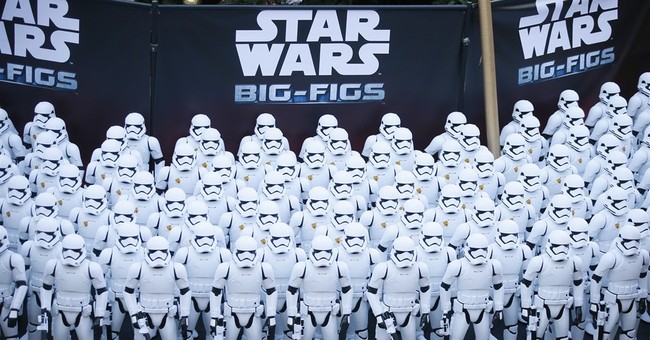 It’s been nearly four decades since the original Star Wars arrived in theaters and showed viewers everywhere the power of the force and the undeniable talents of George Lucas. Two strong sequels and three inferior prequels later, the youthful director J.J. Abrams (Star Trek: Into Darkness) has been tasked with continuing the saga beyond the events of the 1983 installment, Return of the Jedi.

Continue it, he does.

The talented director quickly sends viewers back into the world of intergalactic heroes, monstrous villains and wondrous spaceships. Although much of the story’s arc is eerily reminiscent of the original’s plot, this new installment is quick to build on Lucas’ legacy with new characters, adventures and twists.

Daisy Ridley and John Boyega are introduced here as Rey and Finn, two unlikely heroes. Rey, like Luke Skywalker before her, is leading a dreary life as a scavenger on the outskirts of the galaxy when the story begins. Finn, on the other hand, is a Stormtrooper who questions the morality of the First Order, an Empire-like evil organization that plans to destroy the rebellion army. Rey and Finn quickly team up in order to return an important droid named BB8 to the rebels.

Without going into greater detail about the plot (it’s best to be surprised by all of the film’s great twists and turns), the feature manages to both introduce strong new characters while also bringing back fan favorites such as Harrison Ford’s charismatic Han Solo and Carrie Fisher’s wise Princess Leia ( now a General in the rebellion army). The returning favorites don’t appear as ploys for the audience’s affection. Each of them has a real and meaningful role in this story and their roles fit nicely in the overall story that screenwriters Abrams, Lawrence Kasdan and Michael Arndt are trying to tell.

Chewbecca (Peter Mayhew) and C-3PO (Anthony Daniels) also return, although one wishes that C-3PO’s role was a bit larger.

While paying homage to the original trilogy (there are so many wonderful references here, including shots of the Empire’s once-might force), the film manages to leapfrog expectations and remind viewers what a great Star Wars movie can be. There’s a great adventure here and worthy special effects, which really show Abrams’ vision coming to life. Add to that the series’ undeniable sense of humor, which is responsible for a few great laughs here.

Star Wars: The Force Awakens may not be as strong as the original series but it is a worthy successor to them. It reminds viewers of why we fell in love with this story so many years ago and how these characters — even now, when so many years have passed — still hold special relevance for so many of us.

Like the entire series, there’s a great overarching theme about the power of good and evil. From the minor characters to the main players, these characters are each given a choice: to choose the dark side of the Force or to choose the right side. Characters like Anakin Skywalker and the newly-introduced Kylo Ren (played by the charismatic Adam Driver) have chosen the dark side while others have chosen the light.

Ridley and Boyega imbue their characters with great ferocity and inner strength while also showing these characters’ unmistakable vulnerabilities. These characters — like the ones in the original series — weren’t born with great abilities. They are both normal people who choose to fight for the rebels against a growing and Nazi-like organization. When asked if he’s prepared to take on the evil forces, Boyega’s character responds with a simple “No.”

He may not be ready for the battles ahead but Abrams surely shows that he was when he took on this assignment. The Force has truly awakened indeed here and that’s why I can’t wait for this series to continue in the years to come.