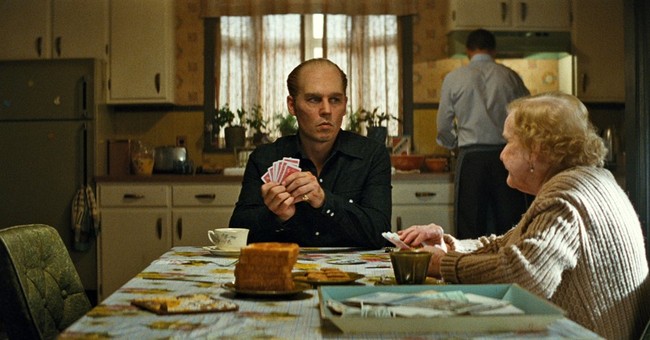 Like his earlier works (Crazy Heart and Out of the Furnace), director Scott Cooper’s latest film Black Mass is a character-driven story. Unlike those other earlier films which often featured good men making some bad decisions, the main character here is one of the most monstrous men of the past three decades. That man is James Whitey Bulger, the Boston mobster who was one of the FBI’s Most Wanted criminals before he was arrested in early 2011.

Captured through the lens of criminal interrogations of his closest associates, the director presents the notorious gangster as a man capable of doing anything to keep power in South Boston.

It’s only a few moments into the story when we see Bulger — back on the streets of Boston after a long stint in Alcatraz — controlling his neighborhood with an iron fist and a group of lackies who would do anything to protect him. Played by Johnny Depp (who delivers one of his best performances here), Whitey is the leader of the Winter Hill Gang, whose unabashed quest for domination knows few limits.

As the story shows Whitey’s power growing, it often cuts back to police interrogations of the men who composed the mobster’s crew. These men, including Jesse Plemons as Bulger’s driver Kevin Weeks and Rory Cohrane as hitman Steve Flemmi , share their tales of Bulger’s growing power as he singlehandedly destroyed those who questioned his power and influence. In the retelling of those stories, director Scott Cooper often films the biggest scenes from behind a character’s shoulders, letting the audience bear witness to Bulger’s burgeoning criminal empire.

The screenplay by Mark Mallouk and Jez Butterworth (adapted from the book Black Mass: Whitey Bulger, the FBI, and a Devil's Deal, which was written by Dick Lehr and Gerard O'Neill) does falter though when it tries to do too much. During the early part of the film, the story focuses on Bulger’s power but then it becomes more about the relationship between Bulger and John Connolly (Joel Edgarton), the FBI agent who used Bulger as an informant but who ultimately became corrupted by the mobster’s influence.

When Connolly’s relationship with Bulger comes to the forefront of the story, the interrogations of Bulger’s allies become less important.

The feature then traces Connolly, who grew up with Whitey and his brother Billy (Benedict Cumberbatch), feeding the mobster information about possible informants. Connolly becomes Bulger’s unlikely ally to his own detriment.

Either of the two main focuses (Bulger’s growing criminal enterprises as told by his associates or his budding relationship with Connolly) would’ve anchored this story properly but the inclusion of both waters down the proceedings a bit. When Bulger’s allies are onscreen, the film is focused on them but when Connolly returns, he becomes the main storyline. On the sidelines of both stories though, we also see the growing political career of Billy Bulger, the mobster’s brother who surprisingly became a powerful politician in the state even while his brother was murdering people on the streets.

Johnny Depp is the main star of this film and loses himself in this character masterfully. He captures the mobster as a good old Irish boy who loves his mother (Mary Klug) and his son Douglas (Luke Ryan) more than anything. When tragedy strikes his family though, Bulger seemingly loses any connection to humanity as he becomes more dangerous and eventually makes it to the FBI’s most wanted list.

Black Mass, despite its storytelling flaws, delivers a powerful and timely message about the perils of compromising with criminals. It’s through Connolly’s own naivety and foolishness that he makes a deal with the devil that ultimately comes back to haunt him. He may believe that he is in control but he never really is. The film hits ultimately hits that point but one only wishes that the movie’s aim was as focused and on point as the lead performance from Depp is.