The Bill of Rights Matters - Even in a Pandemic

John Dempsey  |  Apr 19, 2020
The opinions expressed by columnists are their own and do not necessarily represent the views of Townhall.com.
Top Columns
Trending on Townhall Media 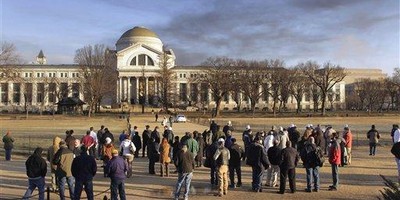 The Founding Fathers realized one of the most important aspects of life – our rights are not granted by man, but by God. They understood that if any government is responsible for giving rights to an individual, those freedoms and liberties can be quickly taken away. Instead, when the Bill of Rights was composed, they agreed and recognized that God is the authority of our prerogatives. Whether an elected official likes the Bill of Rights or not, they must adhere to them at all times, not just when it is convenient for them.

New Jersey Democratic Governor Phil Murphy was on Fox News’ Tucker Carlson Tonight this past week for an interview on the condition on the state. During the conversation, Carlson mentioned the widely publicized incident of 15 men arrested at a synagogue after attending an orthodox Jewish funeral, accused of violating the governor’s edict against large gatherings. Carlson asked Murphy,” By what authority did you nullify the Bill of Rights in issuing this order? How do you have the power to do that?”

Murphy’s response is indicative of an authoritarian. He chuckled at Carlson’s question and said, "that’s above my pay grade Tucker," but did not say whose pay grade it was. Murphy is the governor of the state of New Jersey. He sits in the highest political office. His decisions affect every citizen and anyone who passes through while traveling or on business. There is no one else above him politically. Murphy rejected responsibility.

Also, did you notice Murphy’s reaction to the question about the Bill of Rights? He chuckled. That is what he thinks about your rights as a United States citizen. His response should not surprise anyone. The Democrats laugh at the Constitution daily - they hate it. They abhor the fact that it restricts them from doing what they want to accomplish full-blown socialism.

Murphy could not answer Carlson’s question directly. He made excuses and blamed an imaginary person who is making other executive decisions in the state of New Jersey. Why? He knows that he cannot answer the question truthfully – the Democrats are in a power grab.

Carlson’s question was necessary for this reason: we have seen too many Democratic politicians act like the Bill of Rights does not apply to them. Since we are amid a pandemic, certain governors are governing by executive edict.

There were congregants cited for attending a drive-in church service in Mississippi after the Democratic mayor issued an executive order against them. The mayor of Louisville, Kentucky, Democrat Greg Fischer, attempted to ban the same type of church service but failed after a judge overruled him. The Kentucky governor ordered the State Police to record all vehicle license registration plates of any vehicle in a church parking lot on Easter Sunday with the threat of forced quarantine.

It is ironic. Democrats are proponents for a more powerful federal government with less power handed to states, except now there is a Republican president in office. All of a sudden, they are enjoying States Rights, perhaps to the point of illegal decrees.

The Bill of Rights guarantees us individual freedoms in America. It gives power to the people and restricts the government from reaching too far into our lives. It is one of the most precious documents in the founding of our country – without it, there is tyranny.

The COVID-19 virus is dangerous. It is responsible for the death of thousands of people. Pandemics do not annul our Constitution, and Civil liberties are under assault by the left.

The Democratic Party does not care about liberties and freedoms as initially intended. They are more concerned with creating a victim mentality nationwide, making their victims feel entitled to certain rights, government checks, and social entitlements.

Pandemics are not new and have been around for thousands of years, causing countless deaths. The Founders did not place anything in the Bill of Rights about widespread illness, and there are no clauses in the Constitution about them. Freedom is inherently dangerous. Much less perilous than security granted by the government, however.

“They who can give up essential liberty to obtain a little temporary safety deserve neither liberty nor safety.” – Benjamin Franklin