Parents, Your Children Are Your Most Important Job

John Dempsey
|
Posted: Jul 01, 2019 12:01 AM
Share   Tweet
The opinions expressed by columnists are their own and do not necessarily represent the views of Townhall.com. 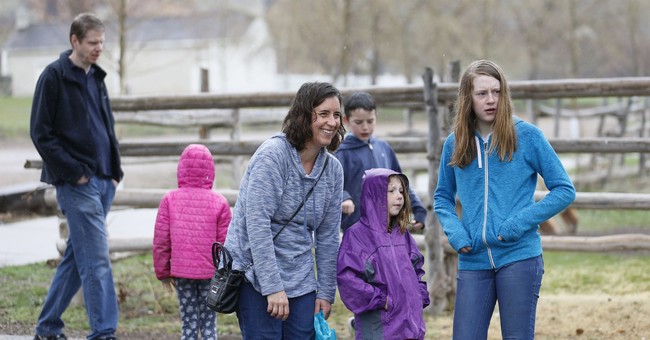 There is one guarantee in life. We will pass from this earth, and our children will fill our void. The level of involvement in kids' lives matter if you care anything about the future of America.

An article recently published in Psychology Today discussed a study that occurred over the course of several years. The research determined that four different primary parenting practices affect children later in adulthood.

There is a crisis in America. I am not referring to the illegal immigration problem. There is a problem with a lack of balanced parenting. The fourth category, neglectful, can be contributed to one of the biggest reasons, according to the information in the Psychology Today article.

Children who do not have an authoritative style applied to them seem to be prone to issues later on in adulthood. Poor parenting can manifest as bad employees, terrible bosses, or just an unpleasant person in general.

One thing stuck out in the article. It said that adults who were raised in an authoritative environment tend to process their emotions better and express their feelings more stable. How we raise our children matters, but there is one thing we must not forget: consistency and application.

It does not matter how much we know about the subject of raising children. If we, as parents, are too lazy and not aware of applying our knowledge consistently, then we failed to a certain extent. For example, if we use authoritative parenting for 25 percent of the time and permissive for 50 percent, then neglectful for the other 25 percent, the child will be confused. He or she will not know what to expect, and they will see chaos as acceptable, affecting them later in adulthood.

Our jobs as parents are to prepare children for coming of age. Parenting affects how children act in public, treat others, react to conflict, and behave as an adult. As young, malleable humans, the expectations children face affect their psyche, emotions, and mental health throughout their entire lives.

If we are not involved in our children’s upbringing, the government or other misguided peers will step in and fill the void. The public-school system, as a whole, is becoming more liberal. There are news articles that gender dysphoric boys are allowed to change in girl’s locker rooms with females, or the hyper sexualization of elementary school students is on the rise. These examples should concern anyone with children and parents should not want those topics replacing old-fashioned parenting.

If we are not parents that offer up structure and discipline with the warmth of love and forgiveness, there will be consequences for the country. We have seen them already in the form of mass shootings, domestic abuse, and other violent crimes.

An increasing problem that goes hand-in-hand with the downfall of traditional American culture and our society is the lack of masculine influence. Both males and females play a particular role in family units that are hard to deny. Men provide specific characteristics that women do not possess, and vice versa.

Children need to feel valued. When their father or mother leaves them, they go through feelings of abandonment, self-doubt, feeling unloved, confusion, betrayal, anger, hatred, sorrow, insecurity, and the list goes on. These feelings are rarely appropriately dealt with and usually repressed. Later in life, those feelings come out in different ways such as manipulation, deceit, greed, self-protection, and other self- preservation emotions and actions. These feelings are devastating as such a young age and typically carry to adulthood.

Compound all of those emotions, years of resentment, other adverse life experiences, and put those on hundreds of thousands, if not millions, of adults, and imagine what the culture of American society might be.

Parents, whether we are married to our children’s mother or father, we have a responsibility to give that child a warm home with discipline and structure that will allow the opportunity to thrive. Otherwise, America is in deep trouble.