John Dempsey
|
Posted: Sep 14, 2018 12:15 PM
Share   Tweet
The opinions expressed by columnists are their own and do not necessarily represent the views of Townhall.com. 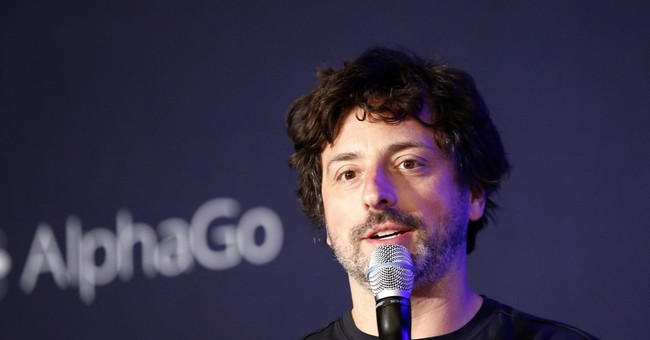 Leftists dominate Silicon Valley. Sure, there are probably some conservatives that work in the large tech area but are undoubtedly far and few between much like in Hollywood and they certainly better not mention their political views.

This week a video surfaced of Google executives and co-founders Larry Page and Sergey Brin, along with Vice Presidents Kent Walker and Eileen Naughton, CEO Sundar Pichai and CFO Ruth Porat speaking to an “all hands on deck” meeting days after the 2016 election. During the meeting, Trump voters were called fascist, racist, xenophobic and all other typical names.

The name calling is not bothersome. However, when co-founder Brin said the company must ensure a “better quality of governance and decision-making” eyebrows should raise. Then, VP for Global Affairs Kent Walker said that “Google should fight the populist movement” purely based on his politics. Given his position in the company and the setting at the time, his statement is a problem.

The left consistently says that President Trump is a “threat to our democracy.” Leftists have tried to paint the president into a caricature that is intent on destroying America. However, over a year and a half later, there is proof otherwise.

Technically, America is the Constitutional Republic with some democratic principles. To say that our democracy is at risk is false, but the left cannot be expected to understand our primary government system.

Regardless, the threat to our country and system of voting does not lie in Trump’s hands. It lies in the hands of Big Tech attempting to censor and gain thought control by selectively editing, throttling, and allowing left-wing publications to saturate news searches in Google and suppressing conservative sites. Since Trump’s election, it is difficult to find any conservative sources in the first few pages of a Google search unless the name of the webpage is in the search bar.

This video is evidence of the tech elitists who believe they should control what citizens see in searches so that Trump's trashed and all the successful things go unseen.

Facebook has throttled and Twitter has shadow banned. From those two practices, the right has surmised that Big Tech targeted them, which Silicon Valley always denied. The leaked video suggests that Big Tech country despises different ideas and tries to control speech and information in favor of liberal ideology.

Human nature causes individuals to be most honest with those who believe they are with others that have like thoughts and ideas. Brin, Walker and all the other executives trusted everyone in the crowd and their intuition was wrong.

Thankfully, there was a least one person who believes in free speech. Who cares about the leaker’s political affiliation at this point? Any sane person can appreciate knowing the truth. No matter the genesis.

Did Google meddle in the 2016 election? They claim to be a company that is just a search engine for the internet, delivering a “diverse” choice of options. However, unless you specify what website you want information from, you will be given pages and pages of liberal news sites and some obscure ones as well.

Now, we have a video that proves there is bias. Will there only be one video? Will there be more footage that comes out James O’Keefe Project Veritas drip, drip, drip style on the Googlecratic Party? Let’s hope so.