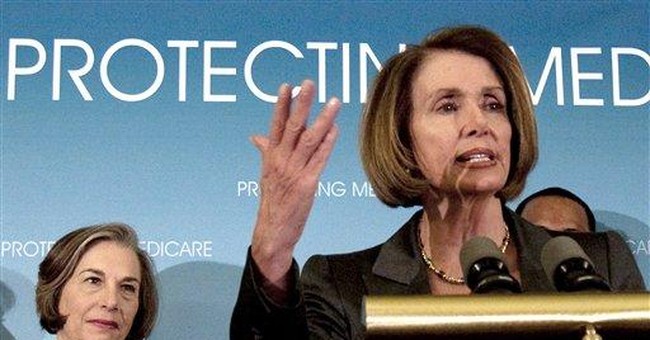 Mr. Romney and Mr. Ryan…want to expose many Americans to financial insecurity, and let some of them die, so that a handful of already wealthy people can have a higher after-tax income.

No, that's not a misprint. The Republicans actually want to let some people die so that they can reward their rich friends. It's not an isolated comment either. Under the heading "Death by Ideology," Krugman actually lists all of the ways in which a President Romney would proceed to kill people. For example:

• Mr. Romney wants…to repeal ObamaCare and slash funding for Medicaid — actions that would take insurance away from some 45 million nonelderly Americans, causing thousands of people to suffer premature death.

• And their longer-term plans to convert Medicare into Vouchercare would deprive many seniors of adequate coverage, too, leading to still more unnecessary mortality.

• [M]any, and probably most, older Americans — would be left with inadequate insurance, insurance that exposed them to severe financial hardship if they got sick, sometimes left them unable to afford crucial care, and yes, sometimes led to their early death.

So what, you may ask, is the basis for all this vitriol? Krugman is writing about health care — a subject about which he has proved time and again he knows virtually nothing. On this occasion he lets loose with this bold assertion:

Krugman claims to have reviewed the economics literature. If he has, then he is an embarrassment to the economics profession, despite his Nobel Prize. Then again, if he claims to have done so but really hasn't, I suppose that's equally embarrassing. (And remember, while all this is going on he is invariably calling everyone who disagrees with him a liar.)

Let me briefly set the record straight. Some studies actually have claimed that tens of thousands of people have died prematurely because they lacked health insurance. But these studies were not done by economists and were never accepted in any credible, peer-reviewed social science journal. They are basically junk science and they have been thoroughly discredited on several occasions, most notably by Richard Kronick, an economist who served in the Obama administration and actually helped design HillaryCare. Kronick writes that "there is little evidence to suggest that extending insurance coverage to all adults would have a large effect on the number of deaths in the United States." I'll get to the children below.

In general, the economics literature has found no evidence that lack of health insurance has any substantial effect on mortality. Prof. June O'Neill, former director of the Congressional Budget Office, thoroughly investigated this issue and found that among Americans above 250% of poverty, lack of health insurance does not affect mortality. Below 250% of poverty, people without health insurance have an 11% higher probability of dying. But the probability drops to under 3% when you take into account demographic differences in the two populations. In fact, it is likely that the differential probability would disappear altogether with a complete inclusion of all the demographic differences between the two groups. (See her PowerPoint slides.)

The most recent evidence on children comes from a paper posted by the National Bureau of Economic Research. It looks at the effects of Medicaid on mortality and finds:

• Medicaid insurance leads to a substantial decline in mortality in older black children.

• It has no effect on white children.

• It has no effect on children — black or white — in states with the most Medicaid expansion.

The last finding is the most important. Krugman claims that by expanding Medicaid, ObamaCare will save thousands of lives and that by repealing ObamaCare, Romney would cause thousands of people to die. The evidence says otherwise.

Paul Krugman deserves the Nobel Prize for his clear thinking and advocacy of free trade. But on health care issues, he is a rank amateur.