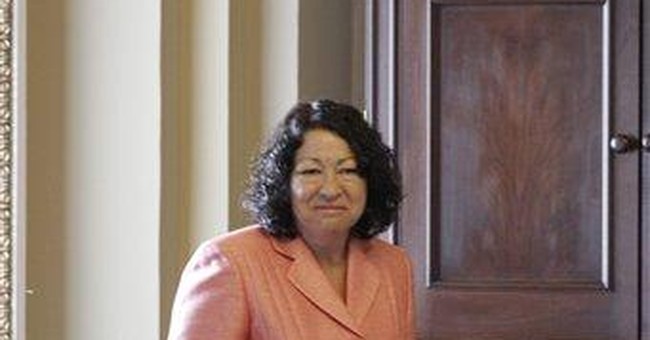 “It is a small state, and yet there are those who love it.” Sen. Daniel Webster, arguing the Dartmouth case before the Supreme Court, actually said “college,” not “state.” But the paraphrase is apropos for my state and yours alike in a summer when the nomination of Sonia Sotomayor has everyone talking about Senators and justices.

We in Colorado do love this smallish state of ours, and folks probably have similar feelings in your state , whatever its size. Jealousy for each state's prerogatives of self-government is in order as Justice Souter departs and federal power metastasizes. “Don’t tread on me,” the defiant flag of the founding era, has made a comeback at this year’s Tea Parties. Does Sotomayor get that? Not that I can tell, which means she’s wrong for the court.

Of the three federal branches, claimed Alexander Hamilton in the Federalist, “the judiciary will always be the least dangerous to the Constitution,” as it has neither “the sword nor the purse.” Decades of judicial imperialism have left that prediction as devalued as Hamilton’s $10 bill.

More accurate was his rival Robert Yates, who wrote in the Anti-Federalist that history had never seen “a court of justice invested with such immense powers, and yet placed in a situation so little responsible.” He worried that the Supreme Court would “be able to extend the limits of the general government gradually” and at last “to melt down the states into one entire government for every purpose.”

Did Yates exaggerate? Not much. From FDR’s time to Obama’s, regardless of which party appointed them, the robed priesthood of the bench has overseen more and more of American governance gravitating from state capitals to Washington and from the elected branches to themselves.

Is there blame to go around? Yes; every part of our body politic has helped weaken liberty. We’re now getting the government we deserve. Does history hinge on Sotomayor’s confirmation or defeat? No; “wise Latina woman” or not, she’s just one judge. We the people must initiate the needed constitutional rebirth.

It’s dismaying, though, how oblivious most politicians are to the high court’s part in turning free citizens into docile “sheeple” (Pravda’s mocking word). Seeking some comprehension of the crisis, I asked Colorado’s senators, Michael Bennet and Mark Udall, what our smaller state with its commitment to participative self-government should constitutionally expect from the Supreme Court. The answers came back bland as sand.

“Coloradans want judges who are fair, impartial, and faithfully apply the law,” said Bennet, adding that he hopes for a sensitivity to “our special concerns in the West” about water rights, public lands, and the role of government. Udall told me the qualities he’s looking for include “moderation, an ability to listen and bridge ideological divides, and above all, a deep understanding of the constitution.” Unlike Bennet, who came out for Sotomayor after a brief meeting, Udall is uncommitted though leaning favorably.

The danger of senators rubber-stamping a president’s judicial nominees, predicted by Oliver Ellsworth at the 1787 convention, seems borne out by these two in relation to fellow Democrat Barack Obama. They need remediation from University of Colorado law professor Robert Nagel, author of “Unrestrained: Judicial Excess and the Mind of the American Lawyer.” Nagel says legal groupthink has made the whole country politically timid and “slavish in believing we need to be saved by the Supreme Court” from the messiness of democracy.

Former Colorado Supreme Court Justice Jean Dubofsky, another Democrat and the first woman on that bench, supports Sotomayor but said she too wishes for a high court with more “out in the world experience” and fewer Ivy-trained Easterners with appellate resumes like this nominee.

Very true, and by that yardstick I’d prefer Dubofsky herself, or Bennet or Udall, or Colorado Gov. Bill Ritter, or or even Pat Schroeder our awful former congressperson, to Judge Sonia. Liberals all – but any of them would be less susceptible to the seductive superstition of Supremes as Saviors.