Joel Goodman
|
Posted: Aug 23, 2021 12:01 AM
Share   Tweet
The opinions expressed by columnists are their own and do not necessarily represent the views of Townhall.com. 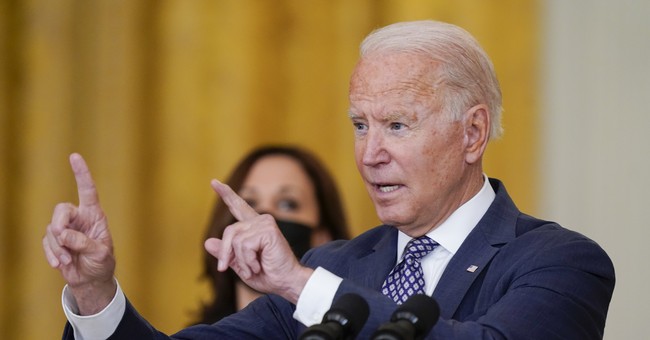 The emotional outpouring from Liberals for the people trapped in Afghanistan, the fact that Biden was actually being criticized, nearly excoriated by the Liberal establishment  left me confused.

My Los Angeles actress friend wasn't. She understood what was happening..

She supports Biden, albeit she is incrementally understanding more and more about the negative aspects of the Liberal agenda. She no longer supports unbridled welfare after having seen the results through the eyes of a successful hard working Black friend when visiting her friend's welfare supported family, and saw her friend take to task family members for doing nothing except sitting around waiting for the welfare check. Through constant coaxing on my part to finally do some research, she finally saw Black Lives Matter as the antisemitic group they are.

My friend doesn't pay much attention to international politics, and so had no predisposition about Afghanistan before it hit the news this past week. At first she just felt that Biden made a mistake, and some people died. I believe she will eventually understand more as she reads more about the story, some from corporate media  - and that  is where this story began for me.

Liberals and the Liberal Corporate media turned on one of their own - Joe Biden. They were upset and blaming Joe Biden for what just happened in Afghanistan

I wasn't prepared for this reaction. Dating back to 2000, and intermittently somewhat before, according to the Liberal establishment nothing the Republicans did was right and nothing the Democrats did was wrong.

Of course this perverted political hypocrisy grew exponentially during the Trump administration. Trump's many  accomplishments were either ignored, ridiculed or diminished. Putting the two impeachments aside, if that is possible, the Corporate Media refused to accurately report the Russia Hoax or even fully investigate it.

Reporting on Trump's trade policies with China was couched in terms of impending war, and Trump's decision to finally implement the 20 year old decision to move the US Embassy in Israel to Jerusalem was accompanied with cries of  imminent  doom and increased hostilities in the Middle East. And, when Trump brokered the  Abraham accords, which normalized Israel's relations with several Arab nations, it was given little positive attention in the news.

The news was distorted and Ant-Trump when reporting his policies that led to America being energy independent for the first time in generations. When he pulled the U.S. out of the  Paris Climate Agreement that punishes the U.S. and rewards China, the Left looked the other way as China outpaces the entire world when it comes to coal fired energy. When Trump convinced our NATO partners to cough up what they owed it was reported that he had stressed our relations with Europe.

And, right before the 2020 election the news media refused to report on the Hunter Biden  scandal that implicated Joe Biden in dirty dealings with China. Ultimately, after the election was stolen, an unruly disturbance at the Capitol was exaggerated into a major insurrection as large as the South firing on Fort Sumter or the Japanese bombing Pearl harbor. Whether the latest news that there was no planned insurrection will be fully disseminated remains to be seen, especially since the Reuter's story covering the release of  FBI conclusions was basically another anti-Trump opportunity, and called the “attack” on the Capitol the worst since the War of 1812, ignoring other actual bombings and shootings that occurred inside the Capitol.

When Joe Biden got into office, nothing he did was seen as bad  The invasion by  illegal aliens and the ensuing humanitarian crisis at the Southern border was invisible to the corporate media, and nary a word of derision was heard from the Democrats in Congress . In fact the Liberals supported the invasion, in which over a million illegal aliens have entered the United States in the past several months; and that 15% tested positive for the China Virus, and that everyone was released into the US - many being transported at taxpayer expense to all parts of the U.S., mostly to the Republican South, it was okay as long as Biden continued to tell us to wear masks and get vaccinated.  There is no concern for the security of the United States, even though among the throngs of  Mexicans, South and Central Americans are people with terrorist ties.

I have always assumed that ignoring the obvious threat to national security - in all  its   ramifications - from culture to national cohesiveness, to actual  security from an attack - well, that is something the Dems just don't care about - or only care if it's a Republican that may be responsible for a security breach.

So, with the Southern Border in mind, I discussed what was happening in Afghanistan with my friend and said I was surprised that Liberals suddenly cared about the threat now developing because of what Joe Biden did. I referenced  the emboldened better armed Taliban and the threat of future terrorism with Al-Qaeda  and ISIS now free in Afghanistan, and a weakened U.S. posture in the world, and causing seriously harmed relations with NATO Allies because of not keeping them informed about the sudden pullout.

She corrected me, saying that their anger it's not about any of that - it's about the humanitarian crisis that Biden caused - all those people being left there. They should have been taken out much earlier.

I mentioned the Southern border for contrast - that Biden could get 1,000,000 people across the Southern border, but couldn't get 100,000 people out of Afghanistan, and she once again said that I didn't understand. The Liberals still  think it's good that all the people that want to come to the U.S., get to come.  It's a humanitarian issue.

It appears that the support for the people trapped in Afghanistan is very simply about that. So, in the eyes of the Liberals, the illegals coming across the Southern border and people needing to leave Afghanistan are the same.

I guess I'm kind of astounded. Liberals are really that narrow minded.

I told her a story about a time I was descending Mt. Whitney and saw three people off the trail - in the middle of a snow field. They were lost and almost freezing. They only had on sneakers and lightweight clothing. I explained to her that I gave the little I had in my pack, but not what I was wearing. It was essential that I stayed warm and functioned well, otherwise we'd all have died if I became cold and weakened.

Liberals don't see survival that way.  They don't understand what America First means; that our government's obligation is first to Americans, and that if we falter or fail or collapse, there's no place left  strong enough to keep freedom alive in a very ominously dangerous world.