Joel Goodman
|
Posted: Oct 04, 2018 12:01 AM
Share   Tweet
The opinions expressed by columnists are their own and do not necessarily represent the views of Townhall.com. 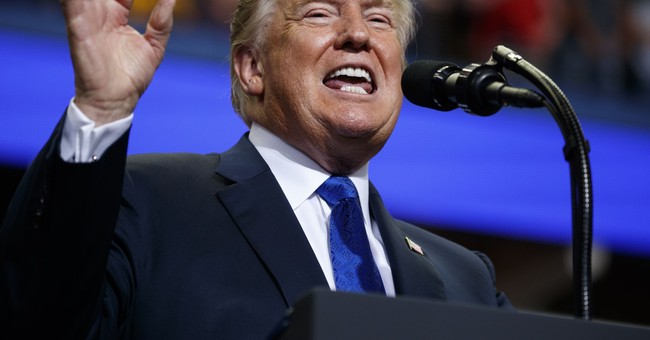 Who would have thought that Senator Lindsey Graham would become an outspoken hero of the Right, that he would be seen as a leader, telling the Democrats that “what they have done is the most unethical sham since I’ve been in politics"?

Who would have thought that Mitch McConnell would declare that he’d had enough of the Democrats’ stall tactics?

Who would have imagined that a judicial nominee would vociferously attack his attackers?

But, within the past week all that has happened.

There are still those whose hatred for the President has not allowed them to put aside petty grievances and face the real danger facing the country.

The inappropriately compromising actions of befuddled men like Senator Jeff Flake are not uncommon in the world of politics. In the somewhat recent past, there were those in England who challenged and belittled Churchill as he warned of making any concessions to Adolph Hitler. Still, the Prime Minister at the time went to Munich and returned waving a worthless brokered promise of “Peace for our time.”

That same phrase has even greater meaning for us Americans.

It was Patrick Henry who stood before a recalcitrant Virginia Convention at St. Johns Church in 1775, facing delegates convinced that the current moment was not yet the right time to confront the British Crown.  Henry stood his ground and called for arming and organizing the Colony’s militia and ended his monologue:

"It is in vain, sir, to extenuate the matter. Gentlemen may cry, Peace, Peace - but there is no peace. The war is actually begun! The next gale that sweeps from the north will bring to our ears the clash of resounding arms! Our brethren are already in the field! Why stand we here idle? What is it that gentlemen wish? What would they have? Is life so dear, or peace so sweet, as to be purchased at the price of chains and slavery? Forbid it, Almighty God! I know not what course others may take; but as for me, give me liberty or give me death!"

Henry was far from timid. He delivered his speech in a strong and bold cadence, forcefully challenging those who wanted inaction.

While we may not yet be at the point of a civil war, we have been threatened by violence and been attacked violently. Marchers have been attacked; members of Congress have been shot. Congressmen and Administration members have been shadowed and accosted. And, much worse, there is an incessant flow of unabashed Democrat lies accusing the Republicans of doing the vile deeds the Democrats are in fact doing. And, sadly, the corporate media is in bed with the Democrats and make no attempt to present the truth; instead, the mass media reports the lies as facts and confounds the lies with additional fabrications and innuendos ad nauseam.

While the country is on the way back from a precipice overlooking a Socialist totalitarian hell, the former president was still peddling his falsehoods in Finland, belittling the current president as a science denier and an authoritarian.

So, when those from whom we least expect courage and forth righteousness stand and deliver, we must question why this has happened.

As was said by the Stones a generation ago and used by Donald Trump in his campaign:

I, for one, never would have thought that the man we'd need to save this country would be the playboy billionaire Donald Trump.  But damn it – he’s the man.

It is Donald Trump who showed us that attacking vulgarity with vulgarity is not only not wrong, but it is appropriate.

The Democrats and their promoters in the media and in Hollywood – and their masters in the world wide globalist derivatives based money system – are being challenged.  They are being called out on their words and deeds – and they are not accustomed to it.

The expectation during the hearings was that Dr. Ford, projecting an aura of pure innocence, could politely destroy Kavanaugh’s life, and he would follow the rules and answer with words dripping in politeness. It was expected that the nasty words from Chuck Schumer, Cory Booker, Kamala Harris and Mazie Hirono would be answered by less than an antagonistic response.

But, that didn’t happen.

It didn’t happen because there is a new day in Washington. Whatever the result of this nominating process, times are changing. Republican anger is being kindled, strengthened and unleashed. It is as if a veiled hypnotic curtain has been pulled back and there is no longer anything in the way of answering in kind the vileness that is being slung from those who want the destruction of the one thing that stands in the way of their dream of a one world sameness bound in servitude to some magical utopian government for all of humankind: a reinvigorated America.

In response to my query, ‘Why she decided to support Trump,’ my neighbor across the street, who early on had a Trump sign in her front yard while I was favoring Cruz, said, “He was straight talking, while everyone else gave politician answers, and I thought he might just do what he said he was going to do.”

Anyone who listened to President Trump deliver his message to the UN last week and still thinks of him as being crude and without a vision is obviously blinded by some irrational passion that will never be ameliorated by any amount of truth.

Another New Yorker, playwright Arthur Miller, may have described this dramatic change as well as it can be described; as he wrote in “A view from the Bridge”:

“…the flat air in my office suddenly washes in with the green scent of the sea, the dust in this air is blown away…”

I believe that after this week in Washington there are many who have sensed the same thing about a new day being possible in the nation's capital.