Exclusive: Up Close & Personal, 5 Days with the Girls of Chibok 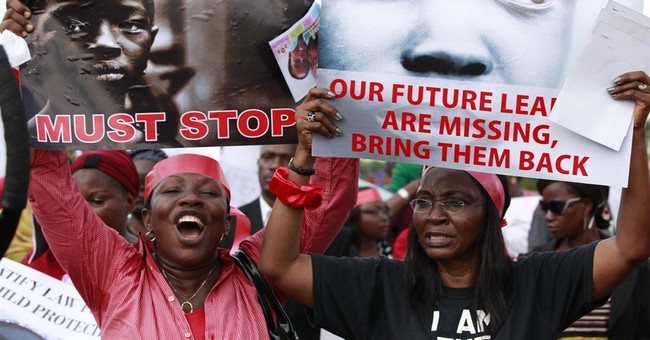 Almost six months have passed since 276 schoolgirls were kidnapped from their boarding school in Chibok, Nigeria. An estimated 60 of those girls miraculously escaped their Boko Haram captors during the first 72 hours, but not without physical injuries and mental scars. Four of those girls are now safely in the U.S. The fate of the rest of the girls is an unfolding tragedy as many have been sold into slavery as child brides and several are already confirmed dead.

Initially, Nigerian’s President Goodluck Jonathon ignored the situation and didn’t begin efforts to find the missing girls until almost a month had passed. Even so, he’s done nothing to assist the victims who survived, leaving the girls who escaped without medical care, trauma counseling, refuge, or money to relocate. He also has not authorized the Nigerian government to provide financial support (approximately four thousand USD per girl for visas and airfare) to those girls who have opportunities to continue their education in the U.S.

Jubilee Campaign is the primary non-governmental organization (NGO) working to find and identify the girls, then provide requisite passports, visas, transportation to the U.S., and private schooling for the girls – especially designed to care for foreign orphans and victims of trauma. They, together with the help of a few inspiring U.S. Congressional leaders, are working against the clock to save these innocent girls.

When each girl arrives in the U.S. she is on a specific visa, sponsored through a designated school. During the first week in America each undergoes medical screening and is provided treatment and vaccinations as needed. Each one also receives an emotional evaluation that determines the plan for appropriate trauma counseling. After this introductory phase, they are escorted to the boarding schools.

A few weeks ago Jubilee Campaign invited me to spend time with three such girls, an invitation I was honored to accept. These three were the first to arrive in the U.S. and their stories of abduction, captivity, courage, and harrowing escape are both stunning and heart wrenching. Their accounts are worthy of the world’s utmost attention and I hope you all will stay with me through this three part series. For the security of the girls, their names and ages have been altered.

Now, please allow me to introduce you to the Girls of Chibok.

Our first meeting was at a private home in a suburb of Washington D.C. The girls had just arrived in the U.S. and were still decompressing and adjusting to their new surroundings, which I’m sure seemed confusing and overwhelming.

The girls quietly introduced themselves one by one. First was 14 year-old Eve. Although she’s the youngest of the group, she’s the tallest and most gregarious. She has a smile that lights up any room, long braided hair, and beautifully expressive eyes that don’t miss many details.

Next was Ruth who also has long hair and a lovely smile. Ruth is slightly older than Eve. The last to enter was Sarah. She’s the oldest, yet the most reserved and petite. All three were wearing African wrap skirts in vibrant Nigerian prints.

The girls are polite, innocent, and intelligent and their beautiful smiles give a first impression that all is well. But upon closer observation their transient expressions belie that idea, because the deep sorrow they feel for what has been lost cannot be hidden for long. Each one of the schoolgirls must now carry the heavy burden of the horrible memories of the Boko Haram – forever.

To know that filthy brutes had snatched 276 lovely girls from the safety of their warm beds in the middle of the night and swept them into a terrifying journey – boggled my mind. In the Boko Haram’s insanity, the girls were insignificant fodder. To the rest of the world, they are daughters, sisters, future mothers, educators, doctors, lawyers, and on, ad infinitum. They are human beings with a story.

As I quickly learned, their broken hearts yearn for families and friends (many of whom they know are lost and or dead). They mourn for their homes, schools and villages (all burned), and their country (overrun by corruption, destruction and slaughter). Most everything they knew is gone because of the evil of the Boko Haram.

And so they struggle not only to navigate within a completely new culture, but also to navigate between split-second moments of present happiness and their overshadowing past, which is a terrible burden for anyone, especially a young person.

Mid-afternoon the counselor arrived to meet the girls. She specializes in childhood and young adult trauma counseling and happens to be from Africa, so she shares common bond, which is helpful in crisis work.

One of the first things she did was take the girls for a pedicure. While that might seem frivolous to some readers, the truth is that such a simple and safe tactile experience can open doors and break down a few subconscious barriers.

Considering the girls grew up in the most rural region in northeastern Nigerian, they’d never before experienced anything like a pedicure (nor had they heard of it). Based on their comments afterwards, they enjoyed the event but were curiously skeptical of such indulgences. Interestingly, Eve was the only one brave enough to allow the technician to apply polish, albeit a very pale pink. The other two politely refused, shaking their heads that it wasn’t appropriate to have paint on your toes.

I drove back into D.C. for the night but returned the next day, hopeful I was on the road to gaining their trust. But upon my arrival I found the girls distant and distracted. Sadly, Jubilee Campaign had just relayed information that one of the kidnapped girls had been found dead, murdered. It was distressing news indeed, especially for Eve who had been a close friend.

A member of Jubilee Campaign asked the girls to try and create a list of all the names of their classmates from Chibok, (because they are still searching for so many). Sarah was trying to comply, but struggling with her emotions and the computer. I offered to help by typing for her.

At first they refused to recognize any names, possibly because they felt guilty that they are safe and the others aren’t, or perhaps they didn’t want to remember because it’s simply too painful.

But slowly with a bit of encouragement, Sarah and Ruth perked up and began remembering one, then another, and another. They also began to share qualities and memories of their friends, so those notes were added as well.

Eventually Eve joined us, although she was openly distressed about her friend’s death, and found it hard to focus on the other missing girls. It was heartbreaking to see her in such pain, bringing the realities of the kidnapping back into full focus.

We spent hours working thinking back on the qualities of the girls they had known and by the day’s end we had a fairly complete list. Most importantly though, it gave the girls a chance to reflect on all of their classmates and put their memories of the two hundred (plus) girls in some type of order.

On Tuesday morning Emmanuel Ogebe, Special Counsel for Jubilee Campaign, and I escorted the girls to Capital Hill to introduce them to four concerned Congressional leaders. The first stop was Congresswoman Frederica Wilson’s office, where Eve was asked to tell her story.