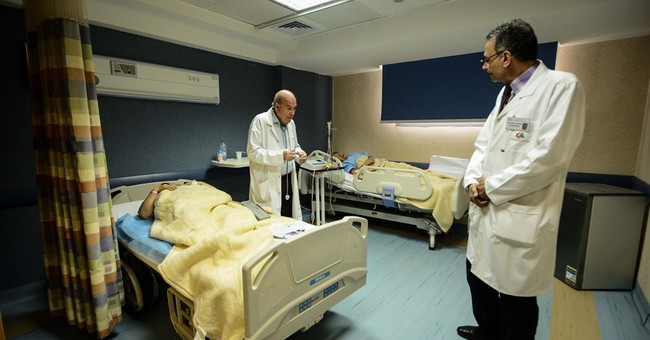 When John R. Ammon, M.D. finished his rigorous training at Harvard and Stanford 36 years ago, he swore to uphold the all important Hippocratic Oath – which proclaims – “Do No Harm.” Looking forward to working as an anesthesiologist, he believed he would never have to compromise that solemn promise. Yet, for Dr. Ammon, as for so many hundreds of thousands of physicians, that oath is progressively more difficult to keep.

Dr. Ammon has spent a lifetime of serving and healing his patients. More than just participating in a practice, his personal belief systems made him keenly aware of – and sensitive to – his patient’s individual needs. As a former Director and President of the American Board of Anesthesiology, as well as a Senior Lecturer in the Department of Anesthesiology at the University of Arizona School of Medicine, and the founder and former President of the Arizona Chapter of Docs4PatientCare, he has a keen insight into the entire healthcare system in the United States. And he is deeply concerned.

During a recent event in Phoenix Dr. Ammon kindly sat down with me and shared his thoughts on Obamacare and why he believes it will ravage our country like a plague of the worst magnitude.

“The way I see it,” Dr. Ammon said, “is that today Obamacare is the greatest threat to our freedom America has ever faced. People are already upset about the insurance issues with the new law, but the truth is we’ve only seen the tip of the iceberg. The full force and effect of the horrifying legislation will impact and diminish the quality of American healthcare both now and into the distant future and severely restrict a doctor’s ability to help patients.

“Obamacare was advertised to the American people as a fix for two healthcare problems. The first was reining in the runaway cost of healthcare and the second was extending health insurance to the uninsured.

“But what the left failed to explain to the American public,” Dr. Ammon continued, “is that long before the law was written, physicians had already agreed that major reforms were necessary, especially in the realms of healthcare financing, taxation and insurance. Had those underlying areas been addressed, the law would have been unnecessary.

“Physicians already knew that the cost of healthcare had ballooned from coast to coast. The steady increase in costs made it harder for many to afford healthcare or insurance for their families. And that drove up the number of uninsured.

“And what’s really amazing to most physicians is that Obamacare did not address any of these issues. It did not address the runaway costs nor did it extend insurance to the uninsured,” Dr. Ammon said. “Quite the contrary, the law has had the opposite effect.

“Take a look at the estimates from the experts at Harvard University and Dartmouth College,” he said. “They anticipate that healthcare costs will continue to grow faster than the economy for at least 20 years. And even more troubling is that the federal government estimates that 31 million Americans will still be uninsured by 2024. So in effect, Obamacare made things much worse.

“And instead of improving the situation, the president’s law has placed unprecedented regulatory and financial burdens on physicians and hospitals. Now, instead of focusing on patient healing and their well-being, practitioners in all specialties are increasingly focused on paperwork and checking statute-driven boxes. It’s exactly the opposite of what was needed.

“But aside from all this, a major problem with Obamacare is the Accountable Care Organizations, or ACOs,” Dr. Ammon continues. “Most people aren’t even aware of the term ACO. Yet, it will be the downfall of our healthcare system as we know it today.

“Here’s how it works. ACOs collectivize hospitals and many physicians together into single units. These units are then paid by the federal government for the specific services and treatments they provide under federal guidelines, in a one-size-fits-all regimen.

“Although this currently applies only to Medicare patients, the model is already being adopted for all patients. One of Obamacare’s main architects was Dr. Ezekiel Emanuel, who brags that the law’s main goal all along was to shift the focus of healthcare from individual patients – to society as a whole, i.e., a European socialized medicine model.

“ACOs are not about the doctor-patient relationship at all,” Dr. Ammon said, “because ultimately the federal government will dictate all treatments, procedures, and payment schedules. And the Independent Payment Advisory Board (IPAB), made up of 15 people appointed by the president, will determine which medical services will or will not be reimbursed – and for how much.

“No matter how obfuscated the truth is, this is truly ‘rationing’ and it should terrify all Americans. According to Obamacare, providers must stay within the mandated guidelines or – at a minimum – Washington will refuse to reimburse them, and at a maximum, providers can face criminal liability.

“Thus, instead of physicians caring for each individual patient and working to achieve the best healthcare outcomes, doctors become professional assembly-line workers. The federal bureaucracy increasingly sits in the middle of the examination room, like Big Brother overseeing our every move and dictating our behavior.

“This is a dagger aimed at the heart of physician’s commitment to the Hippocratic Oath,” Dr. Ammon said. “In too many cases, doctors will have to choose between what is medically appropriate for their patients versus what they are ordered to do (or not do) as mandated by the feds. There is no question that this represent a moral crisis for physicians – follow the Hippocratic ethic or the Obamacare regulations.”

As we ended our conversation, Dr. Ammon had these rather haunting, parting words.

“When I ask pre-med and medical students why they want to become doctors, they invariably say they want to help people. Although I praise and encourage that sentiment, today I have to couch my comments with warnings that they won’t be able to achieve their altruistic goals without the freedom of an unwavering commitment to each individual patient, which will be more and more difficult to attain under the Obamacare.

“Nothing threatens our American way of life or the ability of a physician to care for individuals more than Obamacare. It is an abomination which must be entirely repealed and replaced with real reform, less physicians be forced into an untenable moral crisis.”