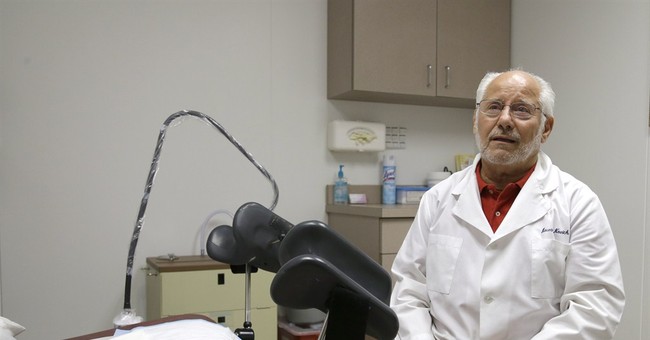 On Wednesday, the Arizona State Senate voted in favor of the new Women’s Health Protection Act: HB-2284, which does three basic things. First, it requires abortion clinics to meet the same Department of Health Services (DHS) standards of safety and inspection as any other clinic or surgical center in the state. Second, it makes it a Class 1 Misdemeanor to aid or assist a minor in receiving an abortion, without parental or guardian consent. And third, it requires that abortion clinics report botched abortions whenever the child is born alive and it requires the clinic report what (if any) steps are subsequently taken to save that child’s life.

Sadly, the vote was straight down party lines, making one wonder if the democrats have any moral constitution at all. For a party that touts itself as being pro-women, it sure seems odd that every one of them would vote against a law which would improve safety and equipment standards in clinics designed specifically to serve female patients.

Regarding the first issue; as it currently stands, county and/or state DHS inspectors are prohibited from snap or random inspections of abortion clinics, except upon obtaining a search warrant. Inspectors are also prohibited from routine inspections except upon re-licensure (once every two years). Out of all the other medical facilities in the state, abortion clinics are given a total pass in the area of safety and health inspection standards. So even if the authorities receive complaints and suspect abuse of the laws, they are not allowed to inspect the clinics in a timely manner.

According to the Center for Arizona Policy (CAP), “DSH should have the authority to perform reasonable cause, unannounced inspections of abortion clinics, just as they do with every other type of health care institution.” HB-2284 supports that view.

Regarding the second issue; Arizona Parental Consent statues do require that prior to a minor having an abortion, written, notarized consent must be obtained by the provider from a parent or guardian. However, currently if an abortion provider violates the law, there are no legal penalties which can be imposed, so there’s no risk involved in coercing a 12 year-old girl to have an abortion. But HB-2284 would change that, even if the child is taken out of state to avoid the Parental Consent law, and make it a Class 1 Misdemeanor, which carries a maximum fine of up to $2500.00 and six months in jail.

Finally, regarding the botched abortion issue; in 2012, “LiveAction” went undercover and caught Dr. Mercer, an Arizona abortion doctor, stating that at 23 weeks gestation - a baby “...doesn’t even look like a baby yet...” Yet according to several studies, over 50% of all babies born at 23 weeks survive and thrive (yet they don’t look like a baby)? The same undercover video also caught an abortion assistant admitting that if an infant survived an abortion, nothing would be done to try and save the child’s life.

My first reaction is to wonder if Dr. Mercer was awake during her extensive medical training, because she must have missed the classes on human development. Furthermore, current Arizona Statute mandates that physicians have a duty to promote the life of any fetus delivered alive.

Yet Dr. Mercer’s flagrant lies and disregard for the Hippocratic oath and current Arizona laws exemplify why state legislators must be more aggressive in ensuring that abortion providers adhere to the same standards of practice as any other healthcare provider. At an absolute minimum it will require that abortion clinics report all botched abortions (live births) to the authorities, as well as what measures (if any) the medical personnel took to save the child’s life.

Sadly, even if Governor Jan Brewer signs HB-2284 into law, one has to wonder what impact it will have on abortion providers, since they already disregard rules, regulations and laws. Nevertheless, if states want to prevent abortion clinics from operating at substandard levels of care, this is the approach they must take. By only addressing one or two issues at a time, the likelihood of the laws passing and later being upheld in federal court, seems more possible. Votes on such bills also make it easier to demonstrate just how hypocritical and idiotic the democrats really are about women’s health.

Reagan McCarthy
Nancy Pelosi Is Not Going to Like This Joke Between Trump and Rally Attendee at Arizona Event
Leah Barkoukis
Are Democrats Heading for a 2020 Bloodbath?
Matt Vespa