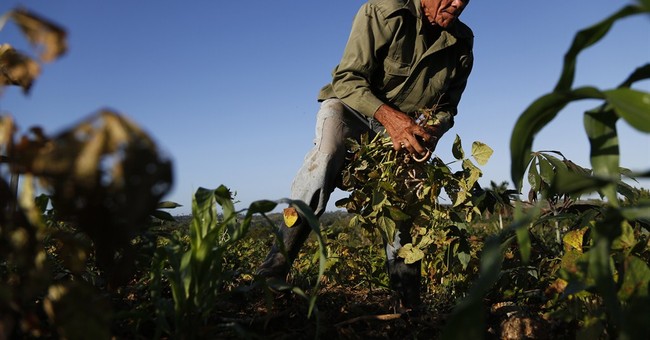 Despite our nation's obsession with all things food, remarkably it is a topic that remains largely absent from political discussion and all but ignored in the news. Sure, there are the rare moments of chatter when America's best minds discover new crevices on a pizza to hide or inject more cheese, and 'eureka' inventions like the cronut.

But aside from the occasional coverage of Michelle Obama's efforts to make wheat grass taquitos and plankton palatable to grade-schoolers, food, as much as we all obsess over it, is rarely a hot topic of public discussion.

This observation is echoed in a recent study of America's agriculture policy released by Americans for Limited Government (ALG), authored by College of Charleston economics professor Dr. J. Wesley Burnett. In his 23-page report, Burnett states, "No other industry affects Americans on a daily basis more than agriculture." It's a statement hard to argue with.

Agriculture probably doesn't move the needle for many when considering current issues of concern, given that we're the nation that invented eating competitions as a sport and avidly watched 12 seasons of The Biggest Loser. But it's a mistake to believe all is well and good in the tiled aisles of the local Food-O-Rama.

Prices of staples such as dairy, meat and produce are up double digits in the past six years, well above the rate of inflation and well above the cost of living increases awarded America's over 30 million senior citizens living on fixed incomes. As head of a seniors group that monitors trends impacting the elderly, it is clear to see they are not the only ones affected by our nation's current agriculture policy.

Going back to even before the New Deal, agriculture was for many years heavily subsidized by the federal government (i.e. taxpayers), essentially making this stalwart industry the government equivalent of today's 25-year-old with a Master's degree in folk dance living in their parents' basement. Agriculture received hundreds of billions in government subsidies, which is an odd and unnecessary course of action for an industry that leads the world and is comprised of among America's hardest workers.

Burnett's report rightly calls the 2014 Farm bill a big step in the right direction, as it ended direct subsidies to farmers, eliminated price supports and shifted more of the obligation for crop insurance programs back to farmers themselves. But he also points out that America's food producing industry is far from standing on solid free-market ground, and this still presents problems that can worsen over time.

Take the case of sugar, which many think of in terms of little packets or giant bags in the baking section, but far more significantly is a central ingredient in nearly everything, from bread, to drinks, to condiments, and thousands of other mixes and finished food items. Sugar is highly price volatile, and the world market is manipulated by government intervention and prone to big peaks and valleys.

Sugar subsidies are the reality of an international market where the world's biggest producers including, Brazil, Thailand, India, China and Mexico, steer billions in government handouts to their producers. America answered these subsidies with market-distorting tariffs that increase U.S. consumer costs.

Burnett concludes the best course of action for consumers, taxpayers and the sugar industry itself is a free-market approach, specifically the zero-for-zero legislation proposed by Congressman Ted Yoho (R-FL), which would seek an end to foreign sugar subsidies and U.S. sugar policy too. It's a plan endorsed by the American Sugar Alliance because of the efficiency of U.S. producers, and one that should be supported by all who believe in the stable prices that the free-market brings.

Aside from ending the sugar subsidies that in the end lead to seniors and other consumers paying more for food, zero-for-zero encourages the U.S. to use its clout in the World Trade Organization to reaffirm our standing as the nation setting the terms of agricultural trade. With a free-market approach benefitting consumers, taxpayers, farmers and food producers, we can finally get government out of the sugar business and focus our efforts on what matters most: discovering the cronut of tomorrow.