Show the GOP the Money 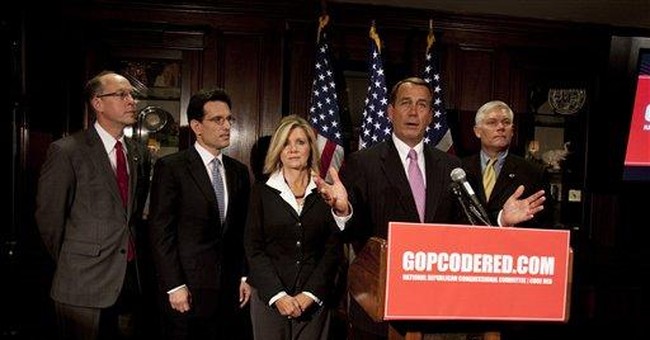 Republicans are being out-fundraised on the national level as the November mid-terms approach. But they’ve got a significant “enthusiasm advantage” that could prove to be more important.

That’s an $18 million difference – not chump change in an election season that everyone is watching. But there is a 20-point “enthusiasm gap” between Republicans and Democrats, according to the latest Gallup tracking poll. Fifty-seven percent of Republicans say they are "very enthusiastic" about voting, compared to 37 percent of Democrats. Independents also indicate higher Republican voting tendencies this fall.

That could mean everything during the mid-terms, when getting voters to the polls is more than half the battle. President Obama has already started on a national campaign to counter Republican grassroots enthusiasm, with speeches and online videos that plead Democrats to come out to the polls.

Obama has an uphill battle ahead of him. This summer is shaping up to be a repeat of last summer’s tea party mania, and special elections in Virginia, Massachusetts and New Jersey seem to indicate that the tide has turned in the Republicans’ favor.

Then again, money talks. Even if it doesn’t talk, it generates buzz, and buzz talks. In their bestseller “Game Change,” Mark Halperin and John Heilemann talked about the “freak show” of media coverage that led to Barack Obama’s unpredictable election. Obama arguably won because he generated enough money-less buzz to begin with, and then capitalized on that buzz to out-raise his opponent for the rest of the campaign.

Additionally, there is an upper limit to an “enthusiasm advantage.” Obama out-spent McCain by more than 60% in 2008, and we all know how that ended up; McCain was underwater on television, direct mail, and paid campaign staff. This discrepancy led Karl Rove to conclude that golden rule may translate into “he who has the gold rules.” Furthermore, incumbents have fundraising advantages across the United States, and the majority of incumbents are currently Democrats.

NRCC Chairman Sen. Pete Sessions (R-Texas) has reiterated his desire to simply keep pace with Democratic fundraising efforts, even if Republicans cannot match them. After that, grassroots support can carry the GOP to victory.

But that overall political strategy would seem to butt up against political spending strategies in the next two elections. Both the NRCC and the NRSC have indicated that they will spend all the cash they have come this November, without saving any for the 2012 Presidential cycle. That means they know this November is important.

Those Republicans organizations might not have any choice except to spend everything they’ve got if the numbers stay where they are.