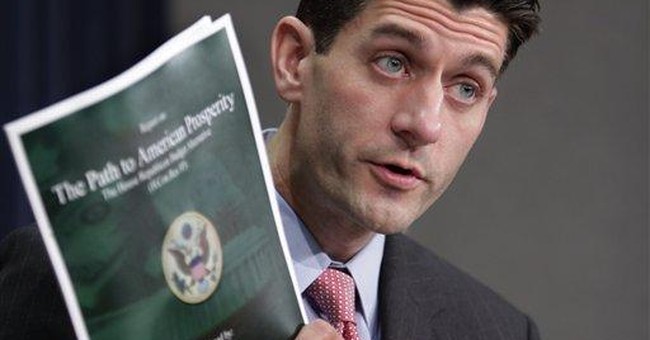 It’s depressing that President Obama is the one calling the shots on the budget right now instead of Rep. Paul Ryan (R-Wisc.).

Obama has created a “deficit commission” to address burgeoning U.S. debts that will be staffed by lawmakers from both parties. Many observers believe that this commission is merely a bipartisan cover-up for future tax increases.

Ryan has proposed groundbreaking tax reform that would take a hacksaw to entitlements, reform the way taxes are assessed, and greatly reduce taxes on the rich that curb growth and breed fraud.

In a good-faith but slightly ironic move, Republicans have placed Ryan on Obama’s deficit commission. Here’s what he has to say about it:

“… I have serious concerns about what this commission can actually achieve,” he said in a statement. “I hope it spurs a genuine effort to tackle the looming crisis of unsustainable entitlement spending – the greatest threat to our nation’s fiscal and economic future.”

Obama’s commission will likely scoff at much of what Ryan has proposed – chopping the marginal income rate and eliminating taxes on capital gains, stocks, estates. He also wants to eliminate the taxes on dividends and the alternative minimum tax.

In their place, Ryan proposes a value added tax – something common in Europe, and something he says would allow fewer tax loopholes to be created. But the end result is that the rich are taxed at much lower rates.

This regressive factor has been the main focus of criticism, but even from critics comes praise that Ryan is the only person to have taken deficit reduction seriously. His plan reduces entitlements so severely that most politicians see it as political suicide, to the point that virtually no Republicans are willing to back him. But Ryan remains steadfast.

“Throughout the 20th century, we have developed a consensus supporting such basic goals as health and retirement security, and maintaining sturdy safety net for those suffering from hard times,” he says in his plan’s introduction. “I support these missions. But our past century’s approach to fulfilling these missions no longer works.”

When he heads to the White House deficit summit, he is unlikely to negotiate another approach that does work. But at least Ryan will have a say.

“Paul Ryan deserves credit for being the only Member of Congress to draft a truly comprehensive, and conservative, solution to our potentially catastrophic budget problems,” said Andrew Moylan, director of government affairs at the National Taxpayers Union. “His plan addresses entitlement solvency, unsustainable spending growth, as well as our complicated and burdensome tax code.”

In short, he’s the best guy to have at the table, even if the deck is stacked against him.