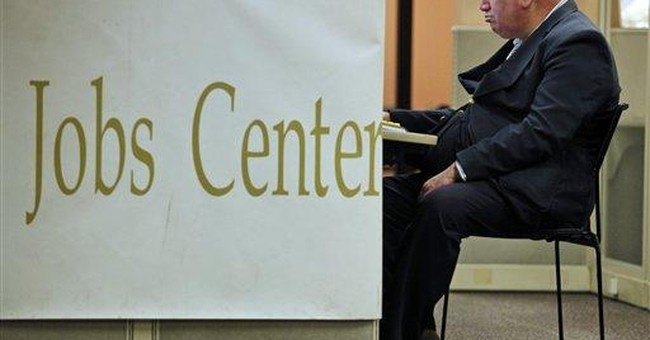 The Office of Management and Budget has calculated jobs that are “saved or created” by the Recovery Act through non-existent congressional districts, phantom ZIP codes, and questionable accounting practices. To remedy these problems (and in a perfectly-timed response to bad press) the OMB has decided to re-calculate “saved or created” jobs to include those that exist independent of any Recovery Act money in the first place.

In other words, the OMB has made their accounting on a $787 billion expenditure of taxpayer money completely meaningless.

“Recipients will no longer be required to sum various data on hours worked across multiple quarters of data when calculating job estimates… recipients will more easily and objectively report on jobs funded with Recovery Act dollars,” said Orzag.

In other words, if a business receives $40,000 in Recovery Act dollars, a job is automatically tallied in the OMB ticker, regardless of whether that $40,000 went towards the actual salary of an employee or fancy office furniture. Businesses won’t even have to fudge the books to use the federal money towards things like catered lunches – non-salary expenses now qualify as a legitimate use of Recovery Act dollars.

Let’s say Joe has employed Bob for ten years, and has no plans on firing him anytime soon. When Joe suddenly receives $40,000 in Recovery Act money, Bob’s job is now the product of the Recovery Act, even though the job existed independently of that money. The new title for this accounting practice is saying that Bob’s job has been “funded” instead of “saved or created” – a phrase that, conveniently, has received the worst press.

If an employee receives a raise, that counts as a job, too. And the OMB wants the new calculations done fast, in time for the “rapidly approaching January reporting period,” just in time for President Obama’s State of the Union address. OMB announced the new changes on December 19th – that’s the Saturday before Christmas – and it wasn’t even noticed until a small nonprofit watchdog, ProPublica, noticed the memo a month later.

"The stimulus has been such a grand failure that the administration has stooped to unabashedly cooking the books," said Republican Study Committee Chairman Tom Price (R-GA). "Moving the goal posts and tinkering with math formulas won't put the country back to work. The ridiculous 'saved or created' label needed to go, but the administration's new stimulus metric is even more misleading.”

Phil Kerpen, the director of Americans for Prosperity, said that the bigger issue isn’t the accounting practices – instead, it’s the fact that government thinks it can create jobs in the first place.

“The bottom line is that every dollar government spends first has to be taxed, borrowed, or printed. How can government spending make us richer when all three of those options make us poorer?”

Racist, Huh? Liberals Will Be Shell-Shocked Over Latest 2020 Data on Trump's Base of Support
Matt Vespa
People Bring the Receipts After Fauci Attempts to Dodge Connections to Wuhan Lab
Katie Pavlich