The Soto Show: Race Up For Grabs 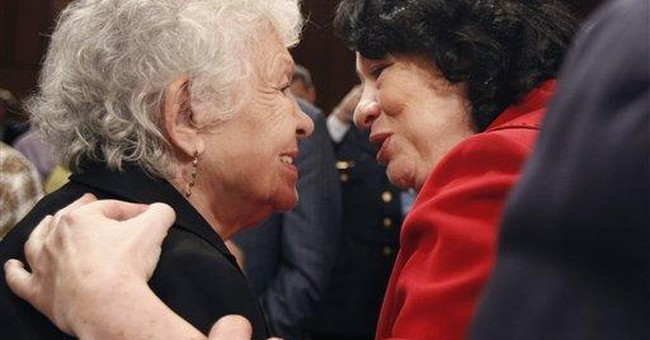 During her first day of questioning, Supreme Court nominee Sonia Sotomayor offered a number of conflicting answers in response to questions by Republican lawmakers about the influence of race and experience in rendering judicial opinion.

Andrew Grossman, Senior Legal Analyst for the Heritage Foundation, was so confused by her answers on the issue that he said he not only had no idea what her views on race were, but that he couldn't imagine any Senator being able to understand them, either.

"Her words don't match up...she has said so many conflicting things," he said.

During the all-day hearings, Sotomayor was repeatedly asked to address statements about her "wise Latina" comment and views on personal experiences with regards to the judicial process. The nominee repeatedly bounced back and forth by trying to explain that she thought race and experience were important parts of being a judge, but also that they should avoided at all costs.

"Life experiences have to influence you. We're not robots to listen to evidence and don't have feelings," Sotomayor said in response to a question by Sen. Jeff Sessions. But in the same breath, she claimed that judges "have to recognize those feelings and put them aside."

Sessions quoted Sotomayor as saying that she willingly accepted "that we who judge must not deny the differences resulting from experience and heritage, but continuously to judge when those opinions, sympathies and prejudices are appropriate."

After Sessions cited the quote in front of Sotomayor, she seemed to change her tune again: "There are situations in which some experiences are important in the process of judging, because the law asks us to use those experiences."

Curt Levy, executive director of the Committee for Justice, says this represents a complete 180 degree switch from the views she demonstrated before she sat down in the hearing room.

"No question, she's completely backing away from all the things she's said about race and her views about raced based judging," said Levy. "This Sonia Sotomayor would definetly not be recognizable today based on what she has said in the past."

In response to further queries by Sessions, in which he cited Sotomayor's stated belief that "backgrounds will affect the result in cases," Sotomayor said the following: "I do not permit my sympathies, personal views, or prejudices to influence the outcome of my cases."

Later in the hearing, she told the Committee: "Life experiences enrich the legal opinion. It's the experience that your Committee looks for in terms of what's the background of the judge."

Grossman saw this as a clear faux pas.

"She said that the infamous quote is irrelevant but at the same time tries to make it have great meaning," he said. "Not only should [her race] be put aside, a judge is required to do that by the judicial code of ethics. Beyond that, putting aside such biasis is a moral imperative. Justices should be blind," said Grossman.

Ilya Shapiro, a senior fellow in Constitutional law at the Cato Institute, agreed, saying that he thought her statements on race and experience were antithetical to an accurate interpretation of the rule of law.

"Everybody entering a courtroom deserves "equal justice under the law" -- an idea dating back to the first democracy in Athens -- rather than having a measure of justice that depends on his or her background, or that of the judge," he said.