Jesse Ranney
|
Posted: May 10, 2021 9:56 AM
Share   Tweet
The opinions expressed by columnists are their own and do not necessarily represent the views of Townhall.com. 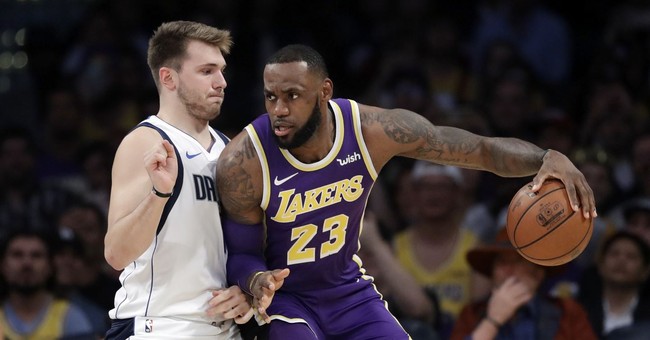 While Sir Charles was right, that didn’t stop me from wearing his jersey, collecting his cards, and pretending to be the ‘round mound of rebound’ in my backyard for hours into the night. In our modern society few things dictate our culture the way the NBA does. I sit here as a grown man, wearing my stance socks, nike shoes, while sipping on Gatorade. Subconsciously the NBA has turned obscure brands into household products, because they’re “cool.” From Beats by Dre to Sprite, the NBA's influence is everywhere in our world.

That doesn’t exclude politics. Now I am far from a believer in ‘shut up and dribble,’ I believe if you have a platform, use it. We’ve seen athletes on both sides catapult their athletic careers to become thought leaders in our communities. Whether it’s Burgess Owens and Jake Bequette on the right, or Bill Bradley and Colin Allred on the left, athletes have taken advantage of their platform for better or worse. In the history of sports maybe no player has had the cultural impact of LeBron James, not only being a superior talent and constantly in the conversation as the greatest ever, he is playing at a time when salaries have never been higher and social media gives them instant access to 50 million fans anytime they pull out their phone.

Recently Lebron James posted a picture of a young police officer who made one of the toughest decisions I can imagine… To take a life. He was forced with a choice, knowing to save one young girl's life he’d have to take another. He saved a life, now he will carry the weight of taking a life for the rest of his own. He made the right choice, one he was trained to do, but it is difficult nonetheless. Now, instead of having empathy, or rejoicing in the fact that a young girl was saved, James chose to make a threat to the young officer, “you’re next.”

Unlike Charles Barkley, James has embraced “role model” status. His constant political and philosophical advice is seen by hundreds of millions worldwide. James has taken the mantle of ‘thought leader’ and our culture has embraced him. However the one thing we haven’t placed on him that we would any other is accountability. Though I am no fan of ‘cancel culture’ and believe everyone is entitled to an opinion, no matter how stupid or dangerous it may be, hat message are the suits at Twitter, Facebook, ESPN(Disney) and the NBA sending when they will without pause condemn, censor, and ban members of Congress, the president and Gina Carano but neglect to even acknowledge the danger in a threat like LeBron's?

You see James is arrogant, and there is no reason for him not to be, because he knows they have his back, that anything he says and does will be defended. Charles Barkley didn’t want his actions defended, he was humble enough to know his party lifestyle at the time wasn’t what he wanted kids to emulate. Charles knew his strengths - roughing people twice his size up on the basketball court. Maybe that’s what makes a good role model though, someone who understands the weight of having that platform enough to not want it.