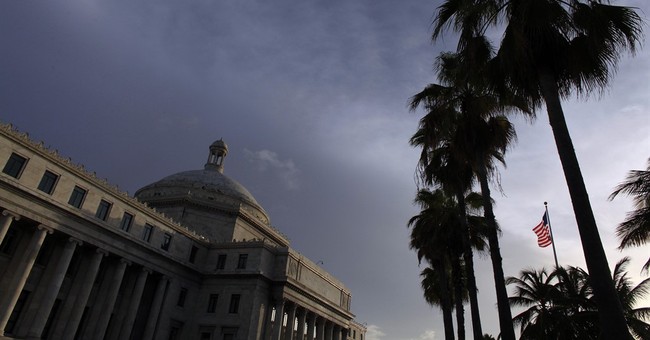 The U.S. territory of Puerto Rico owes more than $70 billion—about $19,729.43 per resident—in debt to creditors and investors. First to note the territory’s fiscal problems were the credit rating agencies, which downgraded the territory’s bond status to “speculative,” the first of three steps along the junk-bond path to loan default.

Over the summer, about a year and a half after insiders warned of the territory’s looming problems, Gov. García Padilla (PPD) announced, “[T]he debt is not payable.”

“My administration is doing everything not to default,” Garcia Padilla said in an interview with The New York Times. “But we have to make the economy grow. If not, we will be in a death spiral.”

Some territory agencies, such as the Puerto Rico Electric Power Authority, are negotiating forbearance agreements with bondholders, but the future of most of the territory’s municipal debt continues to be up in the air.

Without major reforms, the crisis playing out in Puerto Rico will come home to roost in the mainland United States as well, as state governments continue to walk down the same financial path as Puerto Rico and Greece.

One of the root causes of Puerto Rico’s inability to pay its bills is the high cost of doing business in the territory. The litany of mandatory fringe benefits for employees—treated as bonuses elsewhere in the United States—discourages businesses from investing in the territory because the labor costs exceed employee productivity.

Stateside, the cumulative impact of countless business-unfriendly laws in California and New York has caused numerous businesses and the people employed by them to leave those states. Between 2013 and 2014, New York’s net population declined by 153,921, and the number of people leaving California exceeded new arrivals by 32,090. Like Puerto Rico, both California and New York are known for complex tax codes that distort the economy and discourage business investment.

The inevitable result of this incessant business-harassment is fiscal insolvency. Just like Puerto Rico before the fiscal tsunami hit, California carries a jaw-dropping amount of public debt. Adding in the cost of postponed payments to public schools and universities, deferred Medicaid entitlement payments, and other gimmicks, California taxpayers are on the hook for $443 billion in liabilities, or about $11,417.53 per resident.

The situation confronting New York taxpayers is only slightly less bleak than that of a Puerto Rican taxpayer. Each and every New York resident is on the hook for $18,222.78 in public debt. In response to such crushing amounts of public debt, politicians raise taxes even higher, which suppresses economic activity and resultant tax revenues even further, creating the “death spiral” predicted by Padilla.

Tax hikes chase away new business investment and encourage businesses to move. People then move to other states because of the lack of available jobs, and tax revenue falls short of expectations as employment rates and economic activity decline. The bills pile ever-higher as a result. The symptoms of the economic disease crippling Puerto Rico are already present in some states around the nation.

It may be too late for Puerto Rico, the “Island of Enchantment,” but similar high-tax, high-regulation states still have time to avert disaster if they stop treating taxpayers like ATMs and start enacting pro-taxpayer, pro-growth reforms. If they don’t change their ways soon, the result will not be enchantment, but fiscal ruin.