Jesse Grady
|
Posted: Mar 16, 2019 12:01 AM
Share   Tweet
The opinions expressed by columnists are their own and do not necessarily represent the views of Townhall.com. 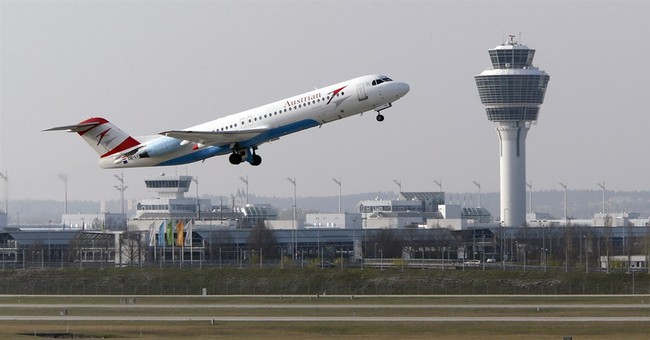 In 1987, then-real estate mogul Donald Trump laid out the strategies and wisdom that built him one of America’s largest real estate empires in his book The Art of the Deal. Now, as President of the United States, Donald Trump has been using those same tactics to deliver real results for the American people, and it’s time he gets some credit for his work.

The first people in line to thank him should be America’s air travelers, as we’re approaching the one-year anniversary of the Trump administration’s decision to protect America’s Open Skies agreements with some of our key global partners. To provide a little bit of background, the U.S. government negotiates Open Skies agreements with foreign countries to open up the market for air travel worldwide.

Before the existence of such agreements, foreign governments pulled the strings when it came to decisions about air service within their borders. How many flights were allowed to enter the country, how many people could be accommodated on board, and how much airline tickets should cost are just some of the important determinations that were out of airlines’ control.

Open Skies puts the power back in these airlines’ hands, allowing them to consider demand when operating in new markets, rather than relying on governments to make these decisions for them. By removing the restraints of bureaucracy, Open Skies has done wonders for the American travel and tourism industry.

Just ask the State Department, which cites “expanded international passenger and cargo flights to and from the United States, promoting increased travel and trade, enhancing productivity, and spurring high-quality job opportunities and economic growth” as just some of the many benefits we have seen due to Open Skies.

It’s no wonder that the United States has signed over 120 of these agreements with a range of different countries.

However, another characteristic of Open Skies agreements is that they inject competition into aviation markets, which has been a bitter pill to swallow for some of America’s larger airline carriers. Over the years, these legacy carriers - Delta, United, and American - have challenged Open Skies agreements with Qatar and the United Arab Emirates specifically, pushing the Trump administration to renegotiate our longstanding deals with these countries.

Thankfully, under the guidance of President Trump, last year the State Department stood up against their requests and refused to undermine Open Skies, a move that has paid dividends for American citizens from coast to coast.

Why is this decision so important? For starters, the very Gulf carriers being targeted by the legacy carriers brought 1.7 million foreign visitors to the United States in 2016. These individuals spent nearly $7.8 billion while inside our borders and supported nearly 80,000 additional U.S. jobs. The economic toll of losing customers like these would be devastating to American enterprise.

Open Skies are also essential for the U.S. aviation industry to function at its highest level. As more travelers enter the United States, smaller domestic airlines serving mid-sized cities have been able to expand their routes and offer new connecting flights. This is especially powerful for consumers living outside of major cities like New York and Los Angeles, as they’re given more choice when booking their flights.

Plus, while competition may not be the best thing for Delta’s bottom line, it lets the market decide what prices airlines should charge for their tickets. In the case of Open Skies, this has saved passengers an estimated $4 billion.

Without President Trump’s leadership, the American public wouldn’t be able to take full advantage of these benefits. So, the next time you’re looking at flights or booking a ticket, it’s President Trump and his administration that deserve the credit for keeping your fares low and choices high.