Jerry Rogers
|
Posted: Jan 08, 2021 12:01 AM
Share   Tweet
The opinions expressed by columnists are their own and do not necessarily represent the views of Townhall.com. 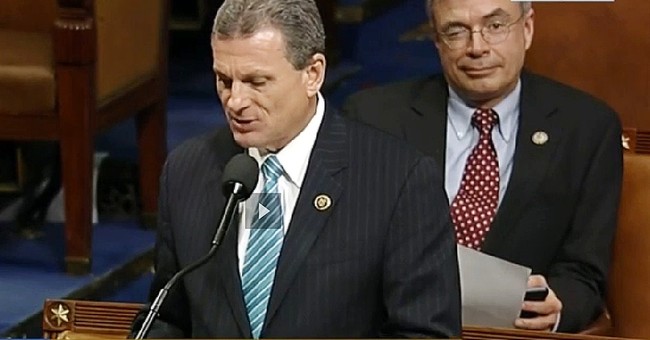 The Baltimore Sun published a piece by Dan Rodricks, a long-time columnist at the paper, declaring Maryland Rep. Andy Harris an ‘accessory to sedition.’

And because the media too often behaves like a propaganda machine for Democrats, the Baltimore Sun is also giving top attention to the Maryland Democratic party demands that Rep. Andy Harris resign immediately, calling him a ‘disgrace.’

For clarity, sedition is defined by Title 18 of the U.S. Code of Justice, Chapter 15 as ‘seditious conspiracy.’ Seditious activity occurs when "two or more persons in any State or Territory... conspire to destroy by force... the Government of the United States."

The fact that Dan Rodricks did not get the terms right reveals both his intellectual laziness and, more importantly, his myopic ideology. His piece is not about sedition, not really. No, Rodricks simply wants to smash his ideological opponent regardless of the law, facts, truth, or history. He wants to cancel Rep. Andy Harris.

Mr. Rodricks makes his irresponsible and dangerously false claim because Rep. Harris challenged the electoral votes in a handful of battleground states that President-elect Joe Biden won. In his challenge, Rep. Harris followed longstanding Congressional procedure and established legal norms. In his bid to question election integrity in certain battleground states, Harris did so openly, legally, appropriately, and, many would argue, courageously.

What Rodricks leaves out of his Harris hit piece is that Democrats have done the very same thing — i.e., objected/protested the Electoral College Certification — on myriad occasions, most recently in 2017 (against Donald Trump).

In fact, on January 6, 2017, another one of Maryland’s own Congressional delegation, Democrat Rep. Jamie Raskin, protested Trump’s Electoral College Certification when Mr. Raskin stood on the House floor to object to 10 of Florida’s 29 electoral votes.

Was Rep. Jamie Raskin an accessory to seditious conspiracy in 2017? No, of course not – but you see, the Left has two sets of standards: one for its allies and a different standard for the rest of us. Let’s be honest, the Left opposes discourse. Democrats and the media do not want compromise, unity. No, the Left wants power. The Progressive Left wants to rule over us.

Will Maryland Democrats demand that (one of their own) Rep. Jamie Raskin resign because he contested the presidential election results of 2016? Did the media label as seditious those who claimed Trump’s victory was illegitimate? Did Democrats demand legal retribution on those who proffered the false Russia-collusion hoax? Are Democrats who protested the Electoral College Certification in 2017 responsible for the violence on Inauguration Day 2017?

Does Dan Rodricks forget #NotMyPresident or #Resist from 2017? Have the Baltimore Sun and the mainstream media memory-holed the Trump Inauguration riots? Just four years ago, Democrat Congressional leaders overtly disputed the 2016 election results blaming Russian hacking. Dozens of Democrats refused to attend Trump’s Inauguration. The Washington Post declared “the campaign to impeach President Trump has begun” hours before Donald Trump took the oath of office. Did Rodricks (or anyone in the media or the Democrat party) accuse these Democrats of sedition? Was the Washington Post guilty of being an ‘accessory to sedition’?

Democrats and the media have spent the last four years delegitimizing the 2016 election. The Left tried to undo the Trump election through riots, protests, and attempts to violate the law. In 2016, Clinton electors in California (and other states) engaged in reckless extralegal actions to overturn state restrictions on how electors must vote. Democrats hoped such lawsuits would cause a tidal wave of Trump electors to change sides.

What happened at the U.S. Capitol on January 6, 2021 was a disgrace. On this point I’m sure Mr. Rodricks and I are in total agreement. The siege at the Capitol was not courage – it was not patriotic. It was the mob. Our Founders opposed the mob. Our Republic, the Constitution, and the unique American idea of the Rule of Law are all a defense against mob rule. We must still oppose the mob today whether it comes from the Left or the Right. The year 2020 was marred by months of Leftist mob violence in our cities. The mob violence at our Capitol added a profound insult to our nation’s injury.

However, accusing Rep. Harris as being partly responsible for the siege is hyper-ideological rubbish. Accusing him of being an accessory to sedition is beyond any semblance of reasonable discussion. Rodricks’s piece is meant to stifle debate. Perhaps he does not even recognize it as such because cancel culture has become so ubiquitous (an unconscious bias of sorts)?

Unfortunately, such accusations of sedition could be the Left’s new tactic to cancel free speech and dissent during the Biden Presidency. The Left has been leveraging false narratives brilliantly over the past four years to silent and intimidate its political opponents – the Russia-hoax, the Impeachment farce, the Charlottesville lie, and politicizing COVID-19. Expect the Left to weaponize the appalling breach of our nation’s Capitol to silence debate. Raise a concern over a Biden policy or push back on a Biden political move, and you will be labeled seditious.

Being accused of sedition is the new McCarthyism, at least it is today. Neither Rep. Harris nor Rep. Raskin were seditious in any way. Both men were fulfilling their duty as they saw fit. I will forever support their right – their obligation – to uphold and defend the Constitution. America needs bold action from Congress. My hope is that Representatives Harris and Raskin and their colleagues find compromise to facilitate a robust political debate.

We can disagree without being disagreeable. Our nation needs a civil, yet spirited conversation – not a cancel culture. Many Americans believe that the government is not protecting their rights. This is a serious issue that demands a serious debate. False, flippant charges of sedition disgrace the public square and ignore the problems that ail us.

Jerry Rogers is the founder of Capitol Allies and the host of the ‘Jerry Rogers Show’ on WBAL NewsRadio.