Jerry Newcombe
|
Posted: May 24, 2018 12:01 AM
Share   Tweet
The opinions expressed by columnists are their own and do not necessarily represent the views of Townhall.com. 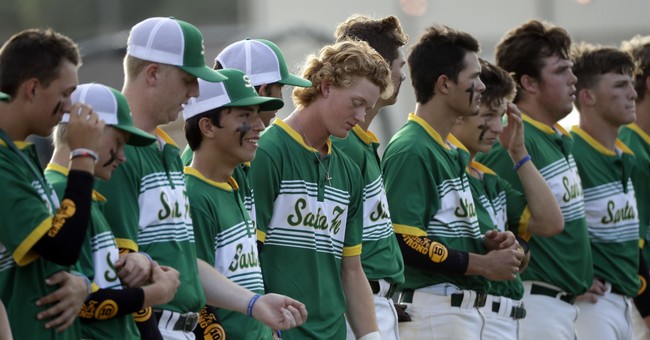 About twenty years ago, I produced a story for D. James Kennedy Ministries on the subject of a school prayer case in Santa Fe, Texas.

On the one hand, many parents and ministers were eager to promote godly influence in the school district. On the other hand, the judge ruled against such influence and did so with great hostility.

Here we are twenty years later, and the tragedy of the Santa Fe, Texas shooting is one of the growing number of cases of school shootings. Our thoughts and prayers are with the victims of this massacre.

Here's the big picture of America: our founders acknowledged our God-given rights. They gave us freedom of religion. They did not want an "establishment of religion" on the federal level. There would be no Church of America, like there is a Church of England.

The founders also wanted the free exercise of religion. That would include the right to pray---yes, in the name of Jesus---even at official events. They believed in this right to the point that the founders hired chaplains for the military and for the legislatures, including the House and Senate.

Furthermore, the founders recognized that the only way our Constitution would work is if the people themselves were virtuous. They said that the way they would be virtuous was through religion practiced on a voluntary basis.

Fast forward to 1947, when Supreme Court Justice Hugo Black reinterpreted the establishment clause to mean that there should be a strict "wall of separation between church and state." This wall was to be "impregnable. We cannot allow the slightest breach."

Justice Black based this novel interpretation on an obscure letter that Thomas Jefferson wrote to a fellowship of Baptists in Connecticut. Jefferson was in France when the Constitution was written. And he was not present at the adoption of the First Amendment.

Constitutional attorney David Gibbs III, founder and director of the National Center for Life and Liberty, told me in interview on the American church-state debate, "Basically, a letter to a constituent was used to support a brand new legal doctrine that the Supreme Court essentially invented. They said we are going to install this concept of the separation of church and state."

Gibbs explains what happened next: "And what it really turned into was judicial censorship. The courts would be able to decide when was there an acceptable level of religion and when did it go too far. And over these last years since that ruling in 1947, it’s been a non-stop stream of cases, where the court tries to balance. And if you really look at it, it’s sheer censorship. We, the court, will decide when you’ve crossed the line….Prayer at a school graduation---what’s allowed, what’s not allowed."

The effect of all this is to kick God out of the public schools. As D. James Kennedy once put it, we've removed God from the public schools and in His place we've had to install the metal detector. But there aren't enough detectors around to prevent all the violence.

The hostility against religion in general, but Christianity in particular, can get downright vicious. In Santa Fe, the ACLU filed suit to halt prayers at a baccalaureate service, privately sponsored by a group of ministers in 1995. The federal judge, Samuel Kent, said that the ministers could still hold the voluntary service, but that no one could pray in the name of any specific deity, such as the name of Jesus.

Just to make sure they got the message, Kent declared, “Anybody who violates these orders, no kidding, is going to wish that he or she had died as a child when this court gets through with it.” Furthermore, the judge ruled that anyone invoking the name of Jesus at this voluntary religious service would be immediately arrested by federal marshals and jailed for a minimum of six months. "Wish he died as a child"? What is this, Communist North Korea? (Judge Kent himself later wound up in prison after being convicted of obstruction of justice in a sexual harassment case against him.)

So, not only was there to be no voluntary religious expression of ideas in the Santa Fe public schools, but anyone who dared to introduce godly influence would be summarily punished. There was also the issue of prayers at the football games in that school district---a case that went all the way up to the Supreme Court with a decision against the prayer.

So, based on false premises, the ACLU and the liberal judges that support their misreading of American history have turned many of our public schools into godless wastelands. Are we now seeing the consequences of their work unfolding before us?

The founders knew that we will all one day give an account to “the Supreme Judge of the world.” "Thoughts and prayers" are not a trivial distraction, but in the long run a major part of the solution.