Jerry Newcombe
|
Posted: Jan 03, 2018 3:45 PM
Share   Tweet
The opinions expressed by columnists are their own and do not necessarily represent the views of Townhall.com. 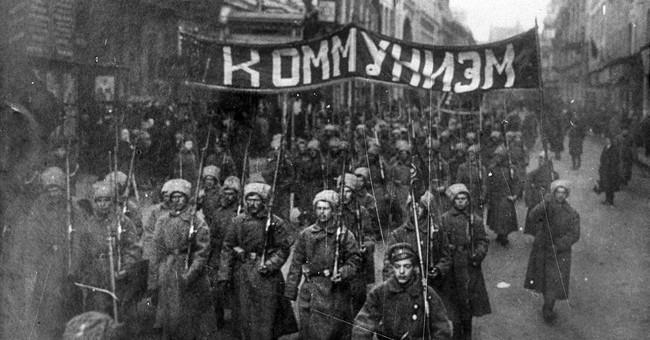 In mid-December, a science editor for BuzzFeedUK, Kelly Oates, tweeted, “All I want for Christmas is full communism now.” Once this tweet was noticed, she withdrew it and issued an apology.

A month earlier, another BuzzFeedUK staffer, Blake Montgomery, had responded to a tweet from President Trump.

The president had declared November 7, 2017 as “National Day for the Victims of Communism.” Montgomery then tweeted, that “victims of Communism” was just a “white nationalist talking point.” He has since withdrawn the tweet and apologized.

The apologies notwithstanding, this shows how there is a great deal of ignorance about Communism and its less violent cousin, socialism, in our day. Millennials, who should know better, are arising who think a government-run economy is more fair and just than a market-based economy.

At D. James Kennedy Ministries, one of our television producers spoke with some young people during last year’s presidential run of Bernie Sanders, an out-of-the-closet socialist. At the time, Sanders was making great headway with millennials.

Here are some of the comments captured on film from some young people in South Florida. Alas, they are now typical of the views of millions of Americans:

•“I think socialism means doing what is best in society for everyone.”

•“Socialism is the means of production being controlled by the people. Capitalism is when other people control your means.”

•“We have to take care of each other. We haven’t done that for a long time in this country.”

I have interviewed conservative economist Steve Moore of FreedomWorks and the Heritage Foundation. He told our viewers: “What really troubles me is how many young people in America today, the millennials, are graduating after eight years of grade school, four years of high school, four years of college if not more, and they think that socialism is the way we should design our economy….That [is] just so disappointing because when you go to socialist places, you see that very few people work. Everybody thinks it’s wonderful you’re going to get all these free things, but you know at some point you’ve got all the people in the wagon and nobody’s there to pull it anymore.”

I also interviewed Bishop Harry Jackson, pastor of a large church in the greater D. C. area. He told our viewers, “[T]hings like socialism are attractive because in a secular society without God, folks see that culture as being the provider of all things. I don’t think young people are looking beneath the ‘gimmies,’ the benefits, the promise.”

The pollster George Barna also told our viewers recently, “37% of Americans say they prefer socialism to capitalism. When you look at the millennial generation, it’s a significant majority of them who prefer that.”

Could you imagine the outcry if somebody were to proclaim, “What we need is a modern Adolf Hitler”---the head of the National Socialist German Workers Party? Such ignorance and maliciousness would be rightfully condemned. Yet Lenin and Stalin and Mao, 20th century leaders of Communistic socialism, seemingly get off the hook.

As D. James Kennedy and I pointed out in our book, What If Jesus Had Never Been Born? “Hitler has slain his millions. Stalin his tens of millions.”

Millennials don’t seem to know this history. Perhaps they’ve never heard of The Black Book of Communism. The publisher is Harvard University Press (1999).

This book documents in no uncertain terms the brutality that the Communists inflicted on the world. The authors write of Communism’s death toll in the 20th century: “The total approaches 100 million people killed.” (p. 4, emphasis added). The tolls are staggering: nearly 20 million killed in the Soviet Union under Stalin (which is frankly a low estimate), 65 million in China under Mao, and millions more in Cambodia, North Korea, and Ethiopia, among others.

They point out: “One cannot help noticing the strong contrast between the study of Nazi and Communist crimes…. scholars have neglected the crimes committed by the Communists.” (p. 17)

We do not even know the exact number of Ukrainians Stalin killed. He reportedly had the census workers shot, so that history would never know how many he forced into starvation. Perhaps at least 3.5 million human beings died just in the Ukraine in the 1930s, in what Robert Conquest has called “the harvest of sorrow.” Some estimate it was as many as 8 million killed.

Young people in the West today, including America and Great Britain, need to learn the truth about socialism and Communism. I highly recommend two easy-to-read novels exposing the truth by a former Communist, British writer George Orwell, Animal Farm (a parable on the Russian Revolution---where the revolutionaries turned out to be worse than the czar) and 1984.

To think that young people today could long for a resurrection of “full communism” just reflects how little they know about history. “History repeats itself,” writes British poet Steve Turner. “It has to. No one is listening.”