Jerry Newcombe
|
Posted: Oct 12, 2017 12:01 AM
Share   Tweet
The opinions expressed by columnists are their own and do not necessarily represent the views of Townhall.com. 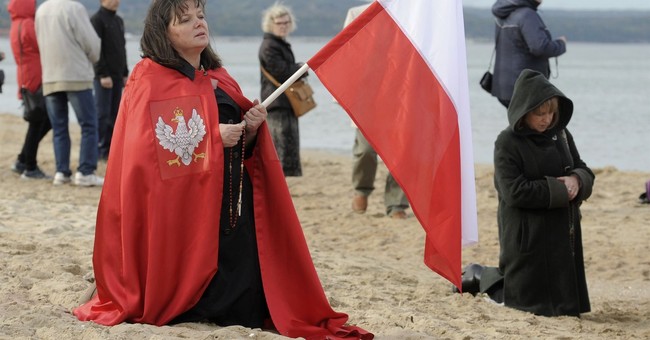 The Polish people have proven to be some of the greatest God-fearing, freedom-loving people on earth. Many of them proved it again just this past weekend.

An article from France24.com, entitled “Polish Catholics pray at borders 'to save country'” (Oct. 7, 2017), explains: “Thousands of Polish Catholics formed human chains on the country's borders Saturday, begging God ‘to save Poland and the world’ in an event many viewed as a spiritual weapon against the ‘Islamisation’ of Europe.”

The article continues: “The goal was to have as many prayer points as possible along Poland's 3,511-kilometre (2,200-mile) border with Germany, the Czech Republic, Slovakia, Ukraine, Belarus, Lithuania, Russia and the Baltic Sea.”

Even people in fishing boats, kayaks, and sailboats joined in the prayer meeting---forming prayer “chains on Polish rivers.”

The Archbishop of Krakow said the believers should pray "for the other European nations to make them understand it is necessary to return to Christian roots so that Europe would remain Europe."

The date chosen, October 7, 2017, was no coincidence. October 7 was picked because of the 1571 victory over one of the many Muslim attempts to conquer Europe, the famous Battle of Lepanto. A betting man would have thought the forces of Islam would prevail, but they did not.

Islam has been trying to take over Europe for centuries. In the last generation or so, they have made greater strides than in the previous several centuries.

Another European leader who understands the Islamic threat and has been persecuted for his hardline stance against radical Islam is Dutch political leader Geert Wilders. He told me in an interview one time that the late Libyan leader, Moammar Ghadafi, had said in effect, “We have 50 million Muslims in Europe, and we don’t need one gun; we don’t need one bullet; we will rule this continent in 10, 20, 30 years’ time…Europe will be ours in the near future.”

And what have been the results? Well, we read about them virtually every week, whether it’s an attack on innocents in Berlin, in Nice, or in London.

Of course, there are many peaceful-minded Muslims, fleeing their own lands because of the implementation of strict Islamic law. I am sure it is not these Muslims that the Christians of Poland are praying for protection from.

One Catholic leader from that Eastern European nation, Marcin Dybowskit, said, "Poland is in danger. We need to shield our families, our homes, our country from all kinds of threats, including the de-Christianisation of our society, which the EU's liberals want to impose on us."

Three months ago, President Trump spoke in Warsaw, also highlighting the freedom-loving nature of the Polish people. Gary Bauer wrote at the time, “Thankfully, we now have a president who is willing to defend Judeo-Christian culture.”

In his 7/6/17 speech in Warsaw, the president noted, “For two centuries, Poland suffered constant and brutal attacks. But while Poland could be invaded and occupied, and its borders even erased from the map, it could never be erased from history or from your hearts. In those dark days, you [may] have lost your land but you never lost your pride.”

He added, “And when the day came on June 2nd, 1979, and one million Poles gathered around Victory Square for their very first mass with their Polish Pope, that day, every communist in Warsaw must have known that their oppressive system would soon come crashing down. They must have known it at the exact moment during Pope John Paul II’s sermon when a million Polish men, women, and children suddenly raised their voices in a single prayer. A million Polish people did not ask for wealth. They did not ask for privilege. Instead, one million Poles sang three simple words: ‘We Want God.’”

The Communists did not look kindly on those Poles seeking godly freedom. I remember hearing Radio Moscow in the early 1980s one day refer to Solidarity, et al., as “the counter-revolutionaries” in Poland.

Dr. Paul Kengor, historian and political scientist who teaches at Grove City College and has written multiple books on Ronald Reagan and his anti-Communist crusade, has written a new book, likely to be a best-seller, A Pope and a President. It deals with our 40th president’s commitment to work with the first Polish pope in history, John Paul II, to help end the Communist stranglehold in Poland.

I interviewed Kengor on my radio show recently, and he tells how President Reagan and Pope John Paul II worked behind the scenes to help free the Polish people from the grip of Communism. This helped lead to the end of the Cold War.

Would that more Europeans be like the Poles. I agree with Trump’s point that ultimately it is their longing for God that makes them long for freedom, including the freedom from the threat of radical Islam.