Inside the Coptic Church Bombings

Jerry Newcombe
|
Posted: Apr 20, 2017 12:01 AM
Share   Tweet
The opinions expressed by columnists are their own and do not necessarily represent the views of Townhall.com. 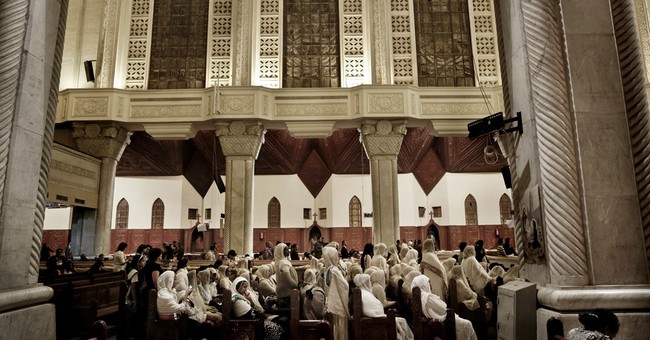 As we all know, on Palm Sunday, two bombings at Coptic Churches in Egypt killed nearly 50 persons and injured 120 others.  I heard about two of my relatives-in-law, who were near enough to hear and feel the blast at St. Mark’s Cathedral in Alexandria. Even though they had returned for a vacation in their native Alexandria and had even been married at St. Mark’s, they are thankful that they providentially chose to worship at another church that particular morning.

An email to me from Coptic Solidarity includes this comment from one of their experts on what happened at St. Mark’s: “[T]he Alexandria suicide bomber detonated himself outside the church. The videos (I've seen) show him trying to enter through a side gate, but the (Coptic) guard man told him to pass thru the metal detector set up by the police a few meters away. As the detector buzzed, he stepped back one step and detonated himself. All 17 victims were on the street around him, including 4 police. Some Muslims walking by were also killed.”

He added, “Timing wise, the service had ended and the Pope [Coptic Pope Tawadros II, the head of the Coptic Church] just left the altar to a resting room in the back of the building. The security set up was especially higher than usual because of the presence of the Pope. That wasn't the case in Tanta where the terrorist managed to enter a seat in front rows.”

In Tanta (56 miles north of Cairo), over three dozen worshipers were killed by the powerful explosion that ripped through the Palm Sunday service near the same time at St George’s Coptic Cathedral. Photos show the bloody mess on the floor and remaining pews of the church. Here again is radical Islam at work.

What exactly are “Coptic Christians”? Lindsay Vessey of Coptic Solidarity once told my radio audience: “Coptic Christians are the indigenous Christians of Egypt. So when St. Mark the Apostle brought the gospel to Egypt, the church that was started there became known as the Coptic Orthodox Church. This is one of the oldest elements of Christianity we have in the world today….They are also the largest Christian minority in the Middle East. They make up about 10 percent of the Egyptian population.”

After the bombings, I spoke on my radio show with Bishop Julian Dobbs of the Convocation of Anglicans in North America. He has many Coptic friends and has visited many Christians in Egypt. He is a board member of the Barnabas Fund, a group dedicated to helping the worldwide persecuted church.

Dobbs told me, “The church has been very strong in Egypt, and we’re thankful to the Lord for it. However, Christians are in the minority, and that places Christianity in Egypt under significant pressure. We saw it recently with the Palm Sundayattacks, but we also see it with regard to Christians in Egypt having decreased freedoms to choose and change their religion, to have Christianity recorded on their identity cards. All of these things are significant challenges to the body of Christ in that nation.”

He added, “We often see these attacks around the holidays…As Christians gathered to declare, ‘Hosanna! Blessed is he who comes in the name of the Lord’ on Palm Sunday, Islamic jihadists attacked churches in two Egyptian cities….The death toll continues to rise. The injuries are horrific.”

What has been the response in the West for the most part? A collective yawn. Even Piers Morgan, a liberal British host (formerly on CNN), expressed his concerns about this story and its scant coverage in the West:“You know, if you look at what ISIS really stands for, what they are carrying out in the Middle East, and in Egypt in particular, it’s a kind of genocidal attack on Christians and Christianity. They want Christianity eradicated…. This is the kind of story that ought to be dominating cable news, in America. It should be dominating headlines around the world. The press in America should be full of headlines about this.”

Roman Catholic Pope Francis I, who is scheduled to visit Egypt, has not canceled his plans (to my knowledge, as of this writing).

Coptic Solidarity wants the Egyptian government, led by President El-Sisi, to do more to protect the Christians. A day after the bombings, they declared, “Under Mr. el-Sisi's rule, the Egyptian state has failed to protect its Coptic citizens. In response to Sunday's attacks, President El-Sisi has declared a three-month emergency period and few other largely symbolic measures.”

It’s scary to think that just by attending church on a Sunday morning, you may be taking your life into your own hands. But such is the reality for many Christians in the Middle East in the shadow of radical Islam. Lord, have mercy.