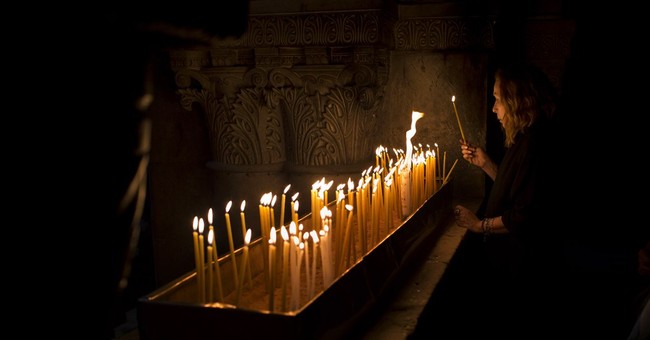 There is a great hunger to be forgiven---it is a universal need.

In the classic book by Karl Menninger of the Menninger Clinic, Whatever Became of Sin?, he described a situation where a mime on the busy sidewalks of Chicago would point at a total stranger and yell out “Guilty!” Amazingly, the reaction of most of the strangers was to slink away, as if to say, “How did you know?”

We all instinctively know that things are not right between us and the universe. There is a name for that, and it is sin. Sin is what is wrong with this world. But sin has been dealt with in a decisive way.

Before a holy God, none of us can stand without condemnation---in our natural state. This is why God sent Jesus, His only begotten Son, to die in our place---to bring salvation for those who believe in Him.

Centuries before Jesus came, God instituted through Moses an elaborate system of sacrifice of animals. From a Christian perspective, all of those sacrifices were foreshadows of Jesus’ once- and-for-all sacrifice on Calvary.

One of the great pictures of Christ’s redemption is the Passover---because the ancient Hebrews were instructed to take the blood of a lamb without blemish and smear it on the top and two sides of the entrance to their homes---in essence forming the sign of the cross. The angel of death would “pass over” the homes where the blood had been smeared, sparing the occupants. People were either covered by the blood of the lamb or they were not.

Christ is the ultimate Passover Lamb who was slain for our sins. When John the Baptist, the great forerunner of Jesus, who prepared the way for the Lord, first saw Jesus, he famously said, “Behold, the Lamb of God, who takes away the sin of the world!” In Latin, Lamb of God is Agnus Dei.

Often in cathedrals, you can see the image of a lamb with a cross---sometimes that cross is like a flag. That is the Agnus Dei, the Lamb of God.

Years ago I interviewed a Jewish believer in Jesus, Murray Tillis of Atlanta. He came to believe in Jesus as His Jewish Messiah and has founded Light of Messiah Ministries.

He told me, “As I read Psalm 22 [written c. 1000 B.C.] for the very first time as a Jewish person, I was shocked that this writer, David, who is writing long before Jesus ever came and long before crucifixion was ever even a known method or means of execution, he was describing the crucifixion of Jesus.” The opening line of this psalm was something Jesus quoted on the cross: “My God, my God, Why hast Thou forsaken Me?”

I asked Murray about Jesus and the Passover. He said, “The meal on the night He was betrayed was a Passover meal. Jesus said to His disciples, ‘I earnestly desire to eat this meal with you.’”

And so in one sense, Passover and communion become one. Murray continues: “And then He took the unleavened bread, symbolic of sinlessness or sinless nature, broke it, and said, ‘This is my body which is broken for you.’”

Murray Tillis concludes: “And so, within the context of this Passover meal, Jesus was saying to His disciples, ‘My blood is going to be shed for you. I am going to be crucified for you. I am the Passover Lamb. And because of that blood, death will pass over you, as well.’”