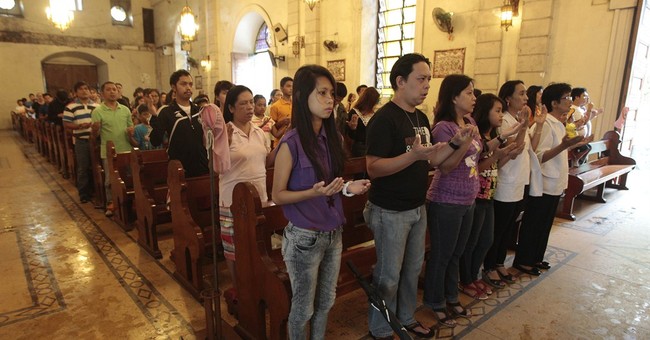 Next month will mark the International Day of Prayer for the Persecuted Church. The official date is November 10, 2013. However, their website states: “…you are free to choose another date if you wish." Voice of the Martyrs and Open Doors have chosen November 3.

When I was a child, I somehow picked up the notion that persecution against the Christian church basically ended with the collapse of the Roman Empire.

But it turns out that the last century was the worst century ever for the persecution of Christians and martyrdom. Dr. David Barrett, a leading church statistician, says there were more Christians martyred in the 20th century than had been murdered in all previous centuries combined.

Persecution today continues to rear its ugly head in various places around the globe, such as in remnant Communist countries, like Vietnam or North Korea. But anti-Christian persecution is especially found in the Middle East and those places where the philosophy of Islamism---a supremacist form of Islam---prevails.

It’s a cliché by now, but it’s true: The Arab Spring has turned into the Christian Winter.

Dr. Peter Hammond of Frontline Fellowship says that just in the last few years the Christian population in the Middle East has shrunk from about 15 million to 13. Most of these have fled the homes their families have occupied for multiple generations---or perhaps even millennia.

Hundreds of years before Mohammed was born or Islam conquered that region, these families lived basically in peace and safety. Even after the Islamic sword swept over their lands and forced them into dhimmi status (a second class status, not unlike the old Jim Crow laws blacks lived under in the deep South), these families still remained in Iraq and Syria and Egypt.

But in recent years, due to events like the “Arab Spring” and the war in Iraq, the region has dramatically destabilized for Christians. We need to pray for these hurting fellow Christians. Paul says, “And if one member [of the Body of Christ] suffers, all the members suffer with it…”

More than 100 or so Christian cathedrals, churches, schools have been destroyed in Egypt just in the last couple of months. One Cairo-based church cancelled the Sunday-morning service in August for the first time in 1300 years.

In a recent weekend, Islamists killed dozens of Christians at a Pakistani church service and shoppers at a Kenya mall. (To the Islamists, virtually all non-Muslims are infidels.)

Recently, American attention has been focused on Syria, though it has somewhat subsided as of late, since a US strike has seemingly been averted for the moment.

Clearly, Syria is undergoing terrible developments. Some call it a civil war. Others would say that foreign invaders are taking advantage of the chaos that came in the aftermath of the Arab Spring, especially after the fall of Mubarak in Egypt.

In any event, Islamists are creating more and more havoc throughout the whole region.

Syria played a key role in the start of Christianity. It was in a city of Syria that the famous moniker for believers in Jesus was first created. Luke tells us in the Book of Acts: "the disciples were first called Christians in Antioch."

Saul of Tarsus was on the road to Damascus, when Jesus appeared to him and changed him into the greatest missionary ever---Paul the Apostle. He went on to write half the New Testament.

It was out of Antioch, that the early Church sent Barnabas and Paul out on the first missionary enterprise. They were the first we know of to bring the gospel to Europe.

My good friend, Bill Federer, bestselling author and speaker, told my radio audience recently that after Greek (the Koine version of which was the language of the New Testament) and after Latin (the main language for Church writings for more than a millennium), Syriac (a language based in Syria) contained the most amount of Christian writings.

Even now, thousands of Christians still live in Syria, but their lives and future are in jeopardy, as are the lives of many Muslims who do not buy into the Islamist philosophy of the Syrian rebels.

Reports show that our government is funding many of these rebels in Syria or providing them with guns. Most agree that Syrian president Bashar al-Assad is a bad guy. Yet the rebels opposing him include Muslim terrorists committed to the same deadly philosophy of Al-Qaeda, whether directly affiliated or not. Christians in Syria, meanwhile, plead with foreign powers to stay out of the battle and to not support the Muslim rebels.

Saddam Hussein was a bad guy by anybody’s reckoning. But, reflecting the “law of unintended consequences,” the change in government in Iraq has been devastating to Christians---the majority of whom have been killed or driven out by Islamic militants.

For TheDailyBeast, Kirsten Powers wrote, “A Global Slaughter of Christians, but America’s Churches Stay Silent” (9/27/13). She notes, “Christians in the Middle East and Africa are being slaughtered, tortured, raped, kidnapped, beheaded, and forced to flee the birthplace of Christianity. One would think this horror might be consuming the pulpits and pews of American churches. Not so. The silence has been nearly deafening.”

It’s time to shatter the silence and mobilize the prayer warriors. The least we can do is pray.