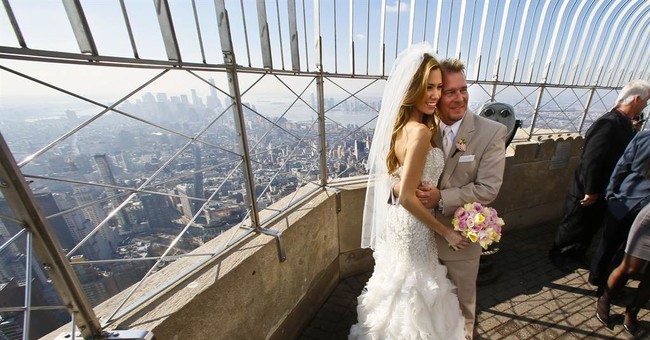 Facebook’s first president, Sean Parker, who was also the co-founder of NAPSTER, recently got married in Big Sur, California. The wedding for 300 guests was estimated to cost $9 million.

That’s astounding. I was driving through Big Sur recently on vacation. (We just happened to have a mini-family vacation there.) We stopped for gas, and I was pumping away before I looked at the price. It was more than $6.00 a gallon! That’s high even for California. I stopped immediately---when I noticed the cost. At least it was a nice view.

Writing for the Telegraph in the UK (6/3/13), Nick Allen says of the wedding, “The scene did reportedly resemble a Hollywood set with landscapers spending weeks building fake waterfalls, ruins and backdrops, and a $600,000 stone gate.” They spent about $1 million in plants/flowers.

It’s incredible that someone could engage in such an elaborate and memorable ceremony---not far from the Hearst Castle no less, where dreams have come true. (The reason our family was even driving through Big Sur was because we had gone to visit the incredible mansion William Randolph Hearst built over 27 years in San Simeon, beginning in 1919.)

When I told my wife about this expensive wedding, she said, “The reason people will spend such elaborate sums on a wedding is because the dream of ‘happily ever after’ will not die.” So true.

We wish the newlyweds all success on their new life together. But this gives me an opportunity to comment on how important it is to prepare for marriage, as opposed to just the wedding.

Sadly, in Western culture, and in America particularly, we have racked up a terrible divorce rate. It’s not as bad as the “one out of two marriages end in divorce” that we keep hearing about.

Years ago, pollster Lou Harris proved that the notion that 50 percent of marriages in America end in divorce gives a misleading picture.

He found that the source of that statistic was that in a given year, the number of new marriages was double the number of new divorces happening that particular year. But that doesn’t mean that one out of every two marriages in America thus ends in divorce because the number of existing marriages were not taken into consideration. There are many who are married and stay so.

Consider this: If you get married, are the chances of your marriage lasting only 50/50? I think not. We have to remember that those who get married and divorced repeatedly will skew the statistics.

Meanwhile, there are certain behaviors we can engage in that help increase the odds of the couple staying together. That would include a few pre-marital counseling sessions.

One of the big ones involves sex before marriage---or the lack thereof. Christian sex educator Pam Stenzel says that if individuals enter into a marriage as virgins, they only have a 2 percent chance of getting divorce.

I realize nowadays that to some that may seem virtually impossible. But no, it’s not.

A classic study on sex in America, under the auspices of the University of Chicago in the early 1990s, found that supposedly “boring” married couples, who were faithful to each other were the ones having sex most often and with greater satisfaction. The researchers wrote: “Once again contradicting the common view of marriage as dull and routine, the people who reported being the most physically pleased and emotionally satisfied were the married couples....”

Take another issue. I know it’s a cliché, but there is a lot of truth to the old slogan, “The family that prays together stays together.” Prayer together is an incredible bonding force.

I remember when I was single, a campus minister advised me against praying together alone with friends who were girls. He said if you do, one thing could lead to another (which could violate the 2 percent principle referenced above), and he knew of such relationships.

Having a common purpose in marriage, where it’s based on the same basic goal and worldview---in my wife’s and my case, a Christian one---makes a huge difference.

We have found that being united in our church attendance also makes a difference. Statistics show that those who attend religious services regularly tend to divorce less.

Wisdom from Scripture, like “don’t let the sun go down on your anger,” can save a marriage.

A romantic view of marriage---the idea that the whole thing is based on feelings---can be very dangerous for any marriage. Feelings come and feelings go. But commitment remains the same.

Amazingly, arranged marriages, in India for example, have a better track record than do marriages based on just romantic feelings.

The Bible’s description of love in 1 Corinthians 13 deals with actions and attitudes, not feelings. Love is patient, kind, not jealous, keeps no record of wrongs, forgives all things, is not arrogant or rude, and so on.

No one gets married to get divorced. Putting such advice into practice can help couples prepare well for a lifetime of marriage, not just the wedding---and it won’t cost you $9 million to get it.